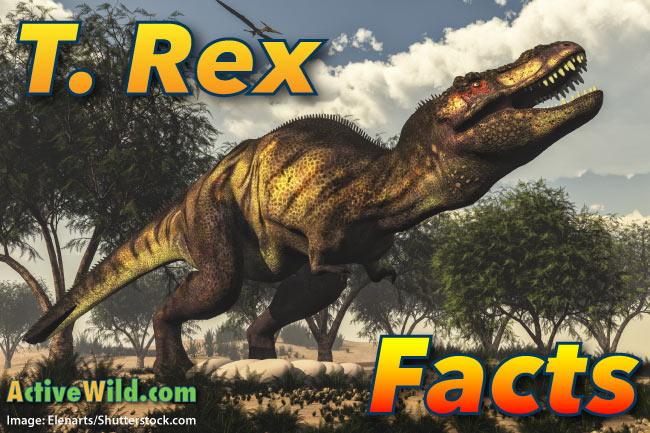 T Rex facts for kids (and adults), with pictures and in-depth information.

Tyrannosaurus rex, or T. rex, is one of the best-known dinosaurs. This fearsome reptilian predator is the star of many films, including the popular Jurassic Park franchise. But how much do we know about T-Rex? How realistic are the portrayals that we see in the movies? On this page we set out to uncover the truth about T Rex, superstar of the Cretaceous period…

Tyrannosaurus rex was a large, predatory dinosaur. It stood on two powerful hind legs, and had a muscular body and tail. Its arms, compared to the size of its body, were tiny. T Rex had two claws at the end of each arm, and its feet had three claws, with an fourth located further up the foot. Its head was massive, and its strong jaws were filled with between 54 and 60 long, sharp teeth.

It’s not just the big teeth that tell scientists T Rex was a predator. Other clues are forward-facing eyes, and a pointed head shape, giving T Rex excellent binocular vision. This helps an animal gauge how far away something is – useful for a hunter.

Prey animals are more likely to have their eyes on the sides of their heads. This is useful when you need to keep a look out for predators, but not so good when you need to actively hunt for food.

T Rex had a flexible neck, allowing it to make quick changes in direction in order to grab fleeing prey.

Large areas of its brain were devoted to vision and smell. This allowed T. Rex to locate and stalk prey. If you were a Triceratops, you might not even be aware that a T Rex was nearby!

Although many clues point to T Rex being a hunter, it may have found at least some of its food by scavenging.

T. Rex almost certainly sat right at the top of the food chain wherever it was found; a full grown T. Rex would have had no natural predators.

However – as we’ll find out further down the page – T Rex may not have hunted alone, and may even have been hunted by other T Rex!

What’s With The Tiny Arms?

Some scientists argue that T Rex’s arms were too small to have served any useful purpose. However, the amount of muscle attached to the arm bones suggest that the arms, although short, were strong, and probably did had a function.

There are several theories as to what T Rex’s arms were used for, including: holding prey close to the jaws when eating, and helping T Rex to get up from the ground.

How Big Was T Rex?

T Rex is one of the biggest land-based predators ever to have walked the earth. Its body was 12 metres (40 ft.) long. It stood around 3.66 meters (12 ft.) tall at the hips. If it was around today, it would be able to peer into upstairs windows with ease! 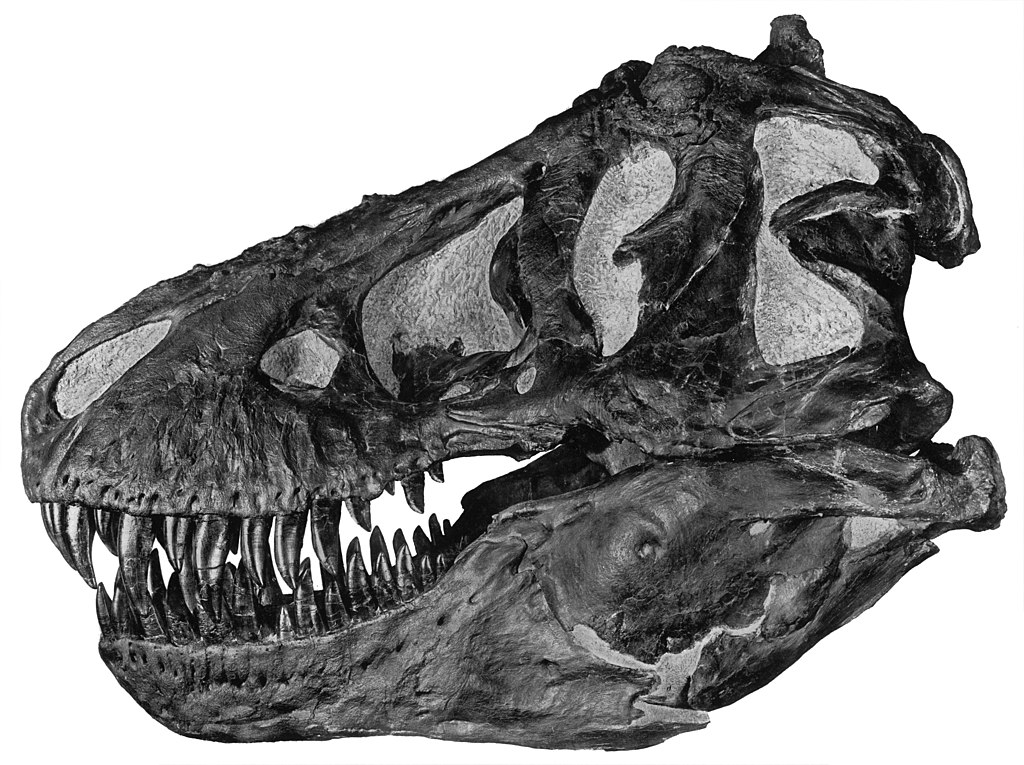 T Rex’s head was over 1.25 m (4.1 ft.) long. From T Rex fossils, scientists can tell that its jaw muscles were extremely powerful from the way they were fixed to its skull. The skull and jaws too were built for strength. They would have been able to crush bones – even thick leg bones – as well as cut through flesh!

As always, clues to the T Rex’s abilities come from studies of fossilised remains. Fossils of T Rex dung include bones that were swallowed with the rest of the prey.

Fossilised specimens of Triceratops and other prey dinosaurs have broken bones that were likely to have been caused by T. Rex bites.

Did T Rex Have Feathers?

The picture below shows what a feathered T Rex may have looked like.

To this day, no T Rex specimens with feathers have been found. However, scientists are beginning to think that T. Rex may have had feathers, at least when young.

Other scientists think that even full grown Tyrannosaurus Rex would have had feathers. This is because specimens of closely-related and similarly-sized species have been found with feathers.

What Dinosaurs Did T Rex Eat?

Hadrosaurs such as Triceratops, Ceratopsians such as Edmontosaurus, and possibly some of the giant sauropods would all have been on the menu for T Rex.

Some T Rex specimens have bite marks that look as if they were made by other T Rex! This may have been caused by fighting to establish dominance, cannibalism, or scavenging: a big dinosaur such as a T Rex isn’t going to pass up a free lunch – even if it is another T Rex!

How Did T Rex Hunt?

Tyrannosaurus Rex probably used short bursts of speed to capture its prey; it was too heavy to pursue other dinosaurs over long distances.

Although T Rex probably hunted its own food, it is likely that scavenged food also made up at least part of its diet. T Rex had an excellent sense of smell, which to many scientists suggests scavenging was actually T Rex’s principal means of finding food.

Other scientists believe that T Rex’s brain was large enough for it to be able to hunt in packs (you need to be smart to work as a team). As if one T Rex wasn’t enough!

When Did Tyrannosaurus Rex Live?

T Rex lived in the Late Cretaceous Period, around 68 to 66 million years ago. It was one of the last dinosaurs of its kind to exist before the Cretaceous–Paleogene extinction event that wiped out the non-avian dinosaurs.

Tyrannosaurus translates as ‘tyrant lizard’ from ancient Greek, and ‘Rex’ comes from the Latin for ‘king’. Put together, the name Tyrannosaurus Rex means ‘King Tyrant Lizard’; a suitably powerful-sounding name!

The man who christened Tyrannosaurus Rex was American Henry Fairfield Osborn. Osborn was a palaeontologist, and president of the American Museum of Natural History. He named Tyrannosaurus rex in 1905.

As with all two word scientific species names, the first word (in this case Tyrannosaurus) can be shortened to its initial if the name is used repeatedly. This is why Tyrannosaurus rex is often abbreviated to T. Rex.

It’s a lot easier to say as well!

Where Was T Rex found?

We hope that you have enjoyed these Tyrannosaurus Rex facts. We hope that not only have you learned about the T Rex itself, but that you have also learned about how scientists piece together aspects of T Rex’s life and appearance from fossilised remains. Isn’t it incredible how we can tell so much from what is little more than pieces of rock?