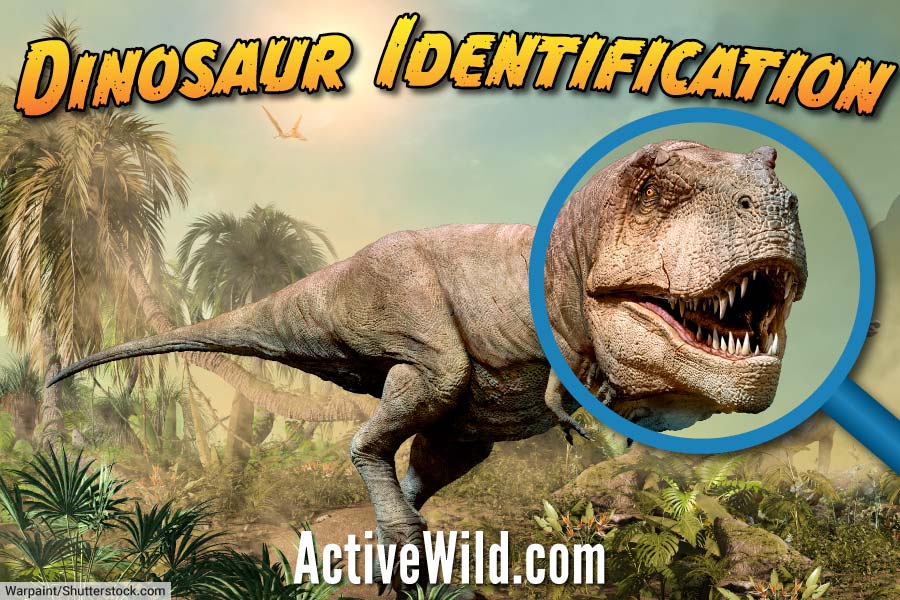 The three main types of dinosaurs are theropods, sauropods and ornithischians. These three dinosaur groups appeared in the Triassic Period, shortly after dinosaurs split from other Archosaurs.

You can find out how to identify dinosaurs in each group below.

Theropods are members of the clade Theropoda (a clade is an “evolutionary branch” of species). The majority of theropods were predatory.

Birds, the only dinosaurs to have survived the Cretaceous-Paleogene Extinction Event that took place 66 million years ago, are theropods.

Most theropod dinosaurs are bird-like in that they are bipedal (they walk on two legs) and have bird-like hind feet. In addition, many theropods had feathers.

Because most theropods were meat-eaters, they have a number of adaptions for this purpose. Their arms and front claws were strong for holding prey. Their skulls and teeth are designed for biting through flesh rather than chewing plants. The teeth of most theropods are serrated for cutting flesh.

Most theropods had three fingers and sharp claws.

Although the long, narrow skull and narrow teeth of Spinosaurus are very different from the wide, heavily built skull and thick, serrated teeth of Tyrannosaurus, both are clearly designed for a predatory lifestyle.

Spinosaurus is thought to be a fish-eater, whose thin jaws and needle-like teeth were suited for grabbing fish from the water. Tyrannosaurus’s powerful jaws were used to bite the flesh of other land dinosaurs, and also to crunch bones.

Not all theropods were carnivores; Therizinosaurs such as Therizinosaurus had huge, scythe-like claws not for capturing prey, but (probably) for gathering foliage and defending themselves against predators. The tips of its jaws were beak-like and lacked teeth.

Sauropods are dinosaurs that belong to the clade Sauropodomorpha, which also includes dinosaurs related to sauropods.

Sauropods had five toes on their hind feet, usually with the two outer digits lacking claws. Their forelimbs had a single claw. Some later sauropods (such as Titanosaurus) lacked any digits on their forelimbs and stood on fingerless, pillar-like forelimbs.

Many sauropods were very large, and the group includes dinosaurs such as Patagotitan and Argentinosaurus, which are the largest land-animals ever to have walked the Earth.

Paleontologists believe sauropods evolved long necks in order to be able to reach foliage high up in trees.

Sauropods had large nostrils, thought to have been either for temperature control, smell, to make sounds, or a combination of all three.

Unlike the teeth of theropods, those of sauropods met at the tips – probably for biting off clumps of vegetation.

The bones of sauropods contained hollow cavities which contained air-sacs. This made the skeletons of these massive animals light enough to move. The air-sacs also helped the dinosaurs to breathe.

Confusingly, it is theropod dinosaurs, rather than ornithischians, that eventually evolved into birds.

Ornithischians also had teeth, which were used to grind foliage that had been broken off with the beak.

Dinosaurs lived alongside with many other animals, including other reptiles; some of which are confused with dinosaurs.

Dinosaurs were land animals: despite their success, dinosaurs did not conquer the oceans, and only a few dinosaurs (e.g., Spinosaurus) are thought to have had semi-aquatic lifestyles.

Dinosaurs did, however, share the Mesozoic world with large, fully-aquatic, ocean reptiles such as plesiosaurs, ichthyosaurs and, from the Late Cretaceous, mosasaurs. These animals were reptiles, but they were not dinosaurs.

Also alive at the same time as dinosaurs were various crocodylomorphs (a group of reptiles that includes the ancestors of today’s crocodilians). These reptiles inhabited both freshwater and marine habitats. Some grew very large and would even have preyed on large dinosaurs.

At some point in the Jurassic Period, feathered dinosaurs such as Archaeopteryx evolved the ability to fly. Before this, however, the only flying vertebrates were pterosaurs.

Pterosaurs were flying reptiles that lived alongside dinosaurs, but they were not dinosaurs.

Dinosaur characteristics include armor, crests, sails, clubbed tails and numerous other physical features. Some of these characteristics are unique to a single dinosaur group, others are found in members of more than one of three main types of dinosaurs.

Below is a list of dinosaur characteristics, with examples of dinosaurs on which they are found.

Hadrosaurs, or duck-billed dinosaurs, are a group of ornithischian dinosaurs that appeared in the late Cretaceous Period. They are characterized by their wide, flat snouts, which resemble the bills of ducks.

Another characteristic of duck-billed dinosaurs is their teeth, which were grouped together in ‘batteries’, to make a crushing or grinding surface. The teeth were replaced continuously throughout the dinosaur’s lifetime.

Several different groups of dinosaurs had horns. The best-known horned dinosaurs are the ceratopsians, whose name means “horned faces”. Ceratopsians were ornithischian dinosaurs that lived in the Late Cretaceous. The most famous ceratopsian is Triceratops.

Some theropod dinosaurs had horns. These include members of the family Abelisauridae, including Ceratosaurus, Carnotaurus and Majungasaurus.

Dinosaurs used their horns in numerous ways, including: defense against predators, fighting rival males to establish dominance, and as a display to potential mates.

Examples of Dinosaurs with Horns

A feature of ceratopsian dinosaurs was the bony frill that grew from the back of the skull and projected over the neck. The frills of ceratopsids in the subfamily Chasmosaurinae were particularly large.

Examples of Dinosaurs with Frills

Pachycephalosauria, a group of dinosaurs also known as bonehead dinosaurs, lived during the Late Cretaceous Period in what is now North America and Asia.

It is generally thought that the thick skulls were used in head-butting behavior similar to that seen in male goats (although this is disputed by some paleontologists).

The most famous type of dinosaurs with long-necks are sauropods. In addition to its long neck, a typical sauropod had a long tail, a tiny head, and supported its huge mass on four pillar-like legs.

Sauropods such as Brachiosaurus, Apatosaurus and Diplodocus are among the most famous of all dinosaurs. Having long necks allowed these herbivorous dinosaurs to reach foliage unavailable to smaller species.

Examples of Dinosaurs With Long Necks

Other Types Of Dinosaurs With Long Necks

Many other types of dinosaurs had relatively long necks in relation to their bodies. Notable examples include ornithomimids, therizinosaurids and some oviraptorosaurs.

Dinosaur With Spikes On Back

A row or rows of spikes running along the back and tail was a common feature of several types of armored dinosaurs.

The armored dinosaurs, or thyreophorans, were a group of ornithischian dinosaurs that first appeared in the Late Jurassic Period.

Members of both groups had spikes on their backs (often in addition to other embellishments, such as bony plates).

Other dinosaurs with spikes.

Several other dinosaurs, including some sauropods, had spikes running along their backs. Examples of sauropods with spikes include Amargasaurus and Dicraeosaurus. Diplodocus and related dinosaurs are also thought to have small spikes on their backs.

Dinosaur With Plates On Back

Stegosaurus and many other stegosaurians had distinctive bony plates on their backs. The exact function of the plates is unknown; they may have been used to control body temperature, as a display to attract mates, or as protection from predators.

Examples of dinosaurs with plates on their backs include:

Dinosaur With Spikes On Tail

Many Stegosaurs had spikes on their tails. The likely function of the spikes was as a defensive weapon against predators.

Examples of dinosaurs with tail spikes

Several ankylosaurs, including the largest and best-known dinosaur in the group, Ankylosaurus, had bony tail clubs. These were likely used as a defensive weapon against predators.

Shunosaurus, a relatively small sauropod from the Late Jurassic, was unusual among sauropods in that it had a defensive club at the end of its long tail.

The best-known dinosaurs with crests are hadrosaurid / duck-billed dinosaurs in the subfamily Lambeosaurinae. This group of Late Cretaceous dinosaurs includes Parasaurolophus; probably the most famous dinosaur with a crest.

The exact function of the crest is unknown, but because it contains tubes connected to the nasal passage, it may have been used either to produce or amplify sound.

Examples of Duck-Billed Dinosaurs With Crests

Dinosaur With Sail On Back

The best-known dinosaur with a sail on its back is Spinosaurus. This semi-aquatic theropod lived in what is now North Africa in the Late Cretaceous. Several other related dinosaurs in the family Spinosauridae also had sails.

The vertebrae of these dinosaurs were extended into spines, which likely supported a sail made of skin. However, the exact form (and function) of the sail is largely unknown. Some paleontologists suggest the spine-like extensions may have supported a fatty hump rather than a sail.

Spinosaurid Dinosaurs With Sails On Their Backs

Other Dinosaurs With Sails On Their Backs

We hope that you have enjoyed this guide to dinosaur identification. There are over 900 known dinosaur genera; hopefully this page will help you to identify some of the best-known among them.

You can find more information on dinosaurs and the Mesozoic Era on the following pages: