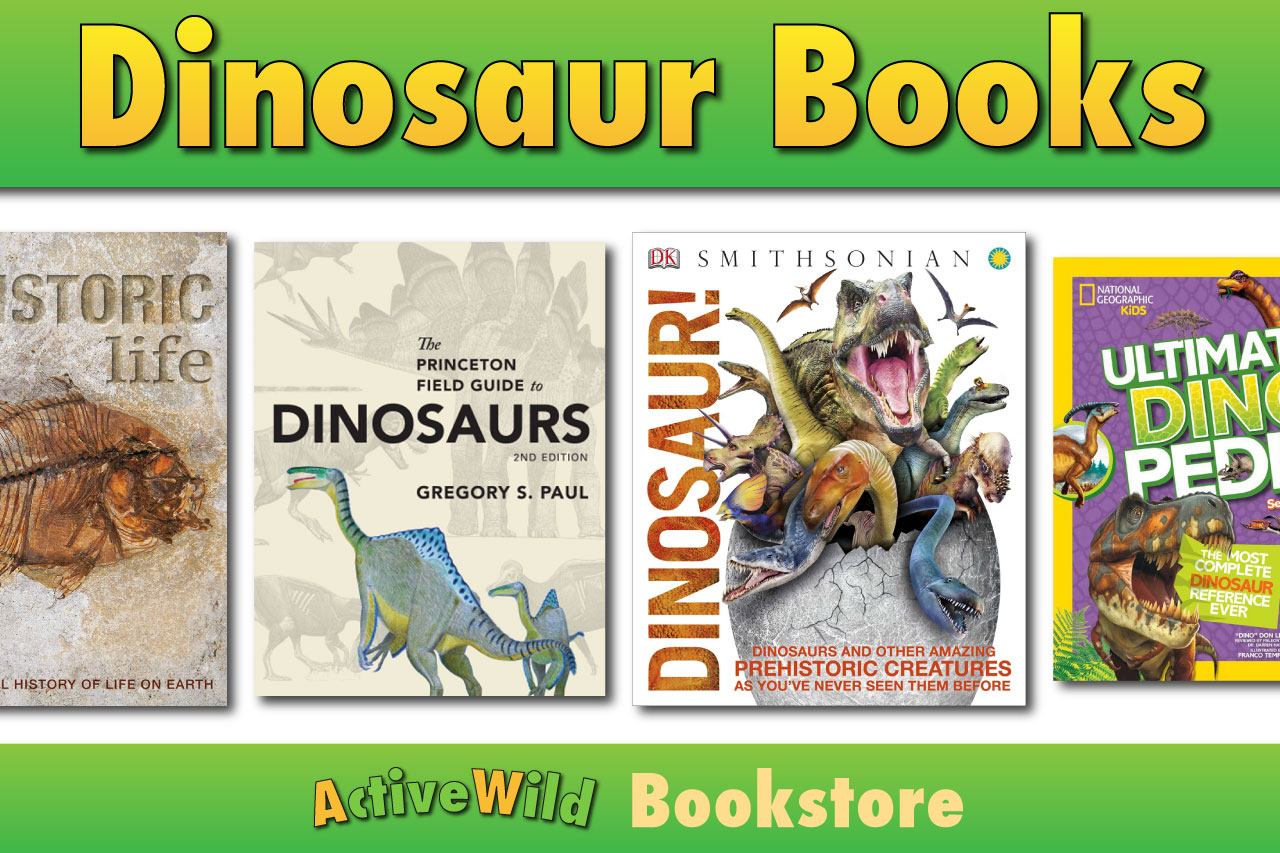 Dinosaur books for dinosaur lovers of all ages. Learn about the Mesozoic Era and become a dinosaur expert. Our carefully selected collection of dinosaur books contains titles suitable for all dinosaur fans and and future paleontologists .

*Click on any of the pictures or links to view the book in your local Amazon store.*

Dinosaurs: The Most Complete, Up-to-Date Encyclopedia for Dinosaur Lovers of All Ages 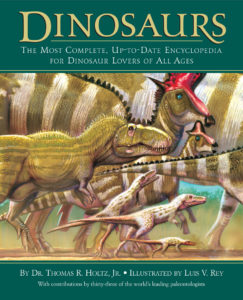 The one book every dinosaur fan needs!

Written by one of the world’s foremost experts on dinosaurs, this award-winning title—honored by the NSTA and the AAAS—is an essential addition to any dinophile’s library, regardless of age! Using casual language aimed at young people and non-scientists, it’s a guide to all aspects of dinosaur science: how we figure out what dinosaurs looked like, how they lived, how they evolved, how they continue to live among us as birds, and much, much more.

It also includes brief entries on all 800+ “named” species of Mesozoic dinosaurs, as well as sidebars by 33 world-famous paleontologists—among them Robert T. Bakker, Jack Horner, Mark Norell, Scott Sampson, and Philip Currie. With 428-pages of lavish, museum-quality illustrations, and an exhaustive Web site maintained by the author of supplemental chapter updates, this the perfect gift that will educate AND entertain for many, many, MANY hours! (And if that isn’t enough, the jacket has a spectacular poster printed on the inside.)

“Written in a casual language both young and adult paleo-nerds will find readable and enjoyable, this volume is seen as the “Dinosaur Bible” by many enthusiasts of the subject, for its sheer completeness and scienciness.” —tvtropes.org

The Rise and Fall of the Dinosaurs: A New History of a Lost World 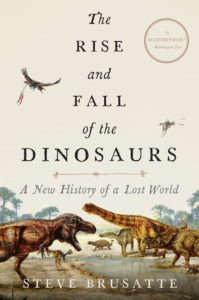 “THE ULTIMATE DINOSAUR BIOGRAPHY,” hails Scientific American: A sweeping and revelatory new history of the age of dinosaurs, from one of our finest young scientists.

“This is scientific storytelling at its most visceral, striding with the beasts through their Triassic dawn, Jurassic dominance, and abrupt demise in the Cretaceous.” — Nature

The dinosaurs. Sixty-six million years ago, the Earth’s most fearsome creatures vanished. Today they remain one of our planet’s great mysteries. Now The Rise and Fall of the Dinosaurs reveals their extraordinary, 200-million-year-long story as never before.

In this captivating narrative (enlivened with more than seventy original illustrations and photographs), Steve Brusatte, a young American paleontologist who has emerged as one of the foremost stars of the field—naming fifteen new species and leading groundbreaking scientific studies and fieldwork—masterfully tells the complete, surprising, and new history of the dinosaurs, drawing on cutting-edge science to dramatically bring to life their lost world and illuminate their enigmatic origins, spectacular flourishing, astonishing diversity, cataclysmic extinction, and startling living legacy. Captivating and revelatory, The Rise and Fall of the Dinosaurs is a book for the ages.

Brusatte traces the evolution of dinosaurs from their inauspicious start as small shadow dwellers—themselves the beneficiaries of a mass extinction caused by volcanic eruptions at the beginning of the Triassic period—into the dominant array of species every wide-eyed child memorizes today, T. rex, Triceratops, Brontosaurus, and more. This gifted scientist and writer re-creates the dinosaurs’ peak during the Jurassic and Cretaceous, when thousands of species thrived, and winged and feathered dinosaurs, the prehistoric ancestors of modern birds, emerged. The story continues to the end of the Cretaceous period, when a giant asteroid or comet struck the planet and nearly every dinosaur species (but not all) died out, in the most extraordinary extinction event in earth’s history, one full of lessons for today as we confront a “sixth extinction.”

Brusatte also recalls compelling stories from his globe-trotting expeditions during one of the most exciting eras in dinosaur research—which he calls “a new golden age of discovery”—and offers thrilling accounts of some of the remarkable findings he and his colleagues have made, including primitive human-sized tyrannosaurs; monstrous carnivores even larger than T. rex; and paradigm-shifting feathered raptors from China.

An electrifying scientific history that unearths the dinosaurs’ epic saga, The Rise and Fall of the Dinosaurs will be a definitive and treasured account for decades to come. 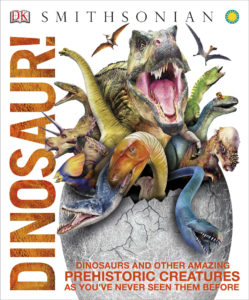 Created in conjunction with the Smithsonian Institution and packed with fun facts on fossils, amphibians, sea creatures, woolly mammoths, Neanderthals, insects and more, Dinosaur! will intrigue readers and provide an experience that will redefine natural history for kids.

The lost world of velociraptor, stegosaurus, allosaurus, and other prehistoric monsters come to life as never seen before in Dinosaur!

Packed with photorealistic computer generated images, detailed cross-sections and cutaways revealing the inner workings of dinosaurs, simple annotations, and clear concise definitions explaining each dinosaur and prehistoric beast at a glance — Dinosaur! revives the Triassic, Jurassic, and Cretaceous Eras and brings young readers into the action. 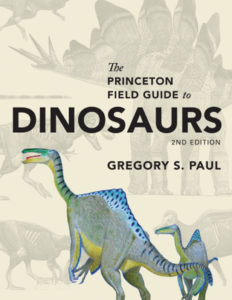 The best-selling Princeton Field Guide to Dinosaurs remains the must-have book for anyone who loves dinosaurs, from amateur enthusiasts to professional paleontologists. Now extensively revised and expanded, this dazzlingly illustrated large-format edition features some 100 new dinosaur species and 200 new and updated illustrations, bringing readers up to the minute on the latest discoveries and research that are radically transforming what we know about dinosaurs and their world.

Written and illustrated by acclaimed dinosaur expert Gregory Paul, this stunningly beautiful book includes detailed species accounts of all the major dinosaur groups as well as nearly 700 color and black-and-white images—skeletal drawings, “life” studies, scenic views, and other illustrations that depict the full range of dinosaurs, from small feathered creatures to whale-sized supersauropods. Paul’s extensively revised introduction delves into dinosaur history and biology, the extinction of nonavian dinosaurs, the origin of birds, and the history of dinosaur paleontology, as well as giving a taste of what it might be like to travel back in time to the era when dinosaurs roamed the earth.

Gregory S. Paul is a leading dinosaur illustrator and researcher who helped establish the “new look” of the Mesozoic creatures seen in contemporary documentaries and movies, including Jurassic Park, for which he served as a consultant. His books include Predatory Dinosaurs of the World: A Complete Illustrated Guide. His work has appeared in Scientific American, Nature, the New York Times, and many other publications.

The Most Complete Dinosaur Reference Ever 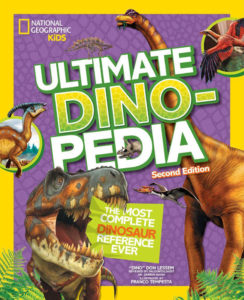 In the crowded field of dinosaur books, this is the very first to offer children ages 7 to 10—those at the height of their enthusiasm for the prehistoric giants—complete coverage of all the known dinosaurs.
Don Lessem, author of more than 60 books—most of them about dinosaurs—teams up with Franco Tempesta, a talented illustrator with a fresh and appealing style. The exciting result is an accessible, visually stunning book that’s packed with facts that kids can use to impress their friends and families.
The Ultimate Dinopedia is organized by the periods that are well known to young enthusiasts: Triassic, Jurassic, and Cretaceous. It includes almost every dinosaur ever discovered, and highlights 125 species that scientists know sufficiently to describe in rich detail. Special features include How We Know What They Looked Like, Baby Dinosaurs, Great Dinosaur Goofs, and much more. Every featured dino gets a fact box that delivers important information at a glance—Scientific Name, Discoverer, Place and Date of Discovery, Length, Habitat, Diet, Fossils, Fun Facts, and Range Map. This book provides—in fabulously illustrated, kid-friendly form—all the information an 8-year-old fact hound needs to lord that knowledge over parents and teachers!

The Definitive Visual History Of Life On Earth 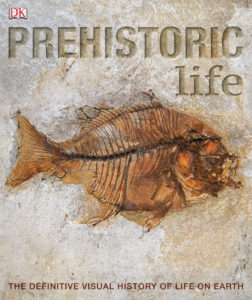 With an extensive catalog at its heart, Prehistoric Life profiles hundreds of fascinating species in incredible detail. The story starts in earnest 3.8 billion years ago, with the earliest-known form of life on Earth, a bacteria that still exists today, and journeys through action-packed millennia, charting the appearance of new life forms as well as devastating extinction events. Of course, the ever-popular and endlessly intriguing dinosaurs feature large, but Prehistoric Life gives you the whole picture, and the plants, invertebrates, amphibians, birds, reptiles, and mammals that are the ancestors of today’s species also populate its pages, making this book unprecedented in its coverage of prehistory. Specially commissioned artworks use cutting-edge technology to render species in breathtakingly realistic fashion, with astonishing images of prehistoric remains, such as skeletons and fossils, to complete the story. To put all the evidence in context, the concept of geological time is explored, as is the classification of species and how the evidence for their evolution is preserved and can be deciphered. 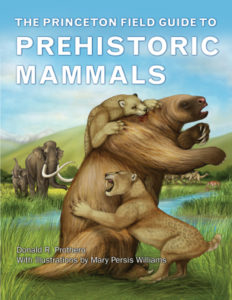 After the mass extinction of the dinosaurs 65 million years ago, mammals became the dominant terrestrial life form on our planet. Roaming the earth were spectacular beasts such as saber-toothed cats, giant mastodonts, immense ground sloths, and gigantic giraffe-like rhinoceroses. Here is the ultimate illustrated field guide to the lost world of these weird and wonderful prehistoric creatures.

A woolly mammoth probably won’t come thundering through your vegetable garden any time soon. But if one did, this would be the book to keep on your windowsill next to the binoculars. It covers all the main groups of fossil mammals, discussing taxonomy and evolutionary history, and providing concise accounts of the better-known genera and species as well as an up-to-date family tree for each group. No other book presents such a wealth of new information about these animals—what they looked like, how they behaved, and how they were interrelated. In addition, this unique guide is stunningly illustrated throughout with full-color reconstructions of these beasts—many never before depicted—along with photographs of amazing fossils from around the world.

Donald R. Prothero is research associate in vertebrate paleontology at the Natural History Museum of Los Angeles County and professor emeritus of geology at Occidental College. His many books include Greenhouse of the Dinosaurs: Evolution, Extinction, and the Future of Our Planet, Evolution: What the Fossils Say and Why It Matters, and After the Dinosaurs: The Age of Mammals.