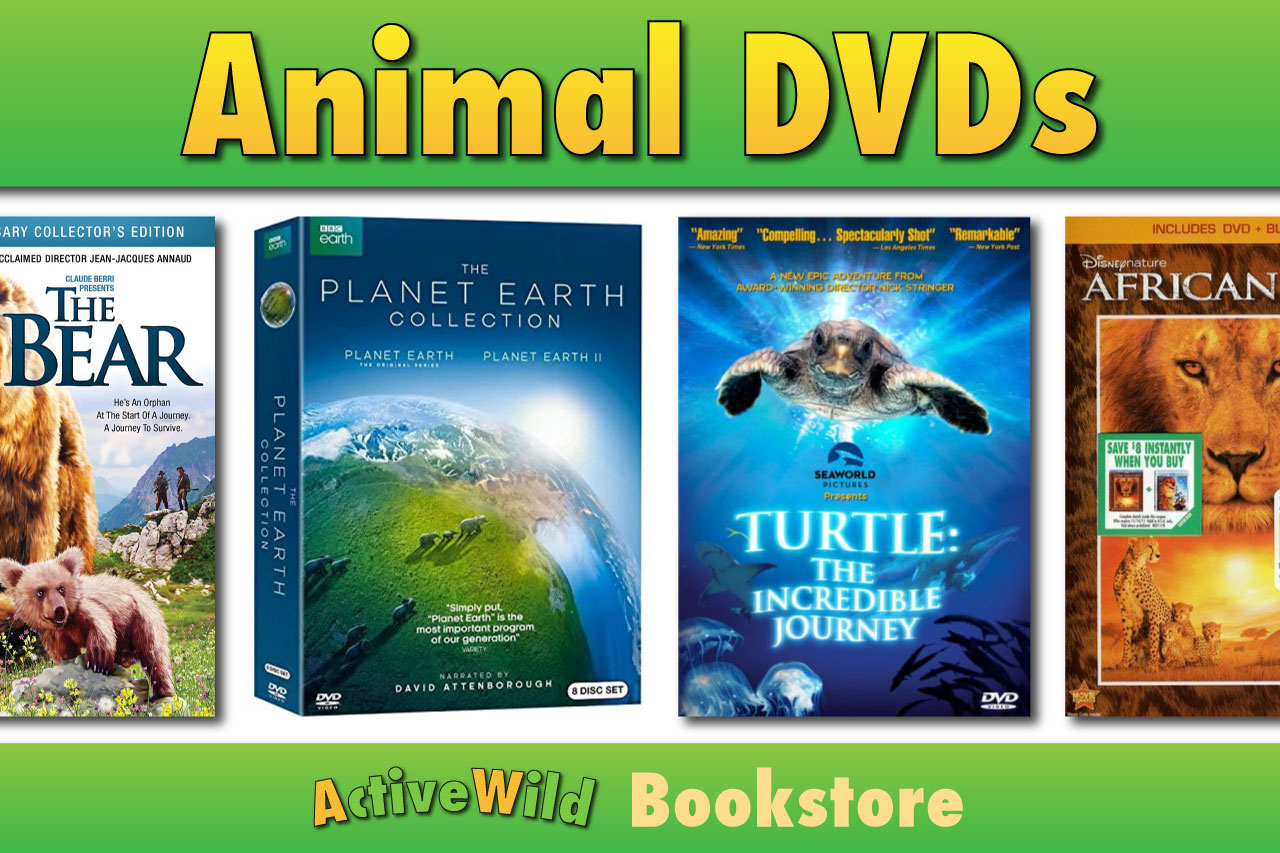 Animal DVDs for nature lovers of all ages. Learn about the animal kingdom and become an animal expert. Our carefully selected collection of DVDs about animals contains documentaries and films suitable for zoologists young and old.

*Click on any of the pictures or links to view the DVD in your local Amazon store.* 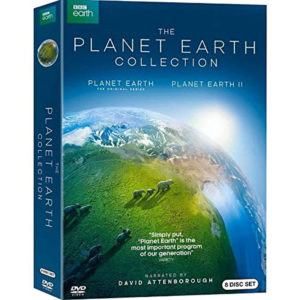 In one of the most ambitious landmark series, Planet Earth allows us to experience the world from the viewpoint of the animals themselves. Travelling through jungles, deserts, mountains, islands, grasslands and cities, this series explores the unique characteristics of Earth’s most iconic habitats and the extraordinary ways animals survive within them.

New technology has allowed individual stories to be captured in an unparalleled level of detail. For the first time viewers are immersed in incredible landscapes and share the most dramatic moments in the lives of animals. From spellbinding wildlife spectacle to intimate encounters, Planet Earth will take you closer than ever before. 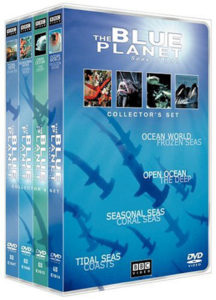 A spectacular achievement and one ot the greatest examples of natural history filmmaking. 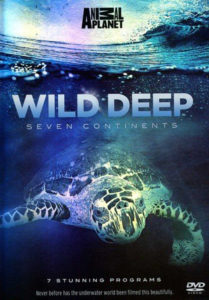 In this landmark series, renowned underwater photographer Darek Sepiolo explores the Wild Deep, taking in the most unique, beautiful and beguiling aquatic life from every continent on the planet. This amazing journey, spanning seven episodes and taking in the entire globe, uses high definition technology to take a truly in-depth look at the enchanting realm beneath the sea.

From the dreamlike landscape of Indonesia’s colorful coral reefs, to the majesty and beauty of sea-going creatures such as sharks, whales, seals and more, this epic series offers a privileged view of a stunning world that few will ever see face to face and is a true once-in-a-lifetime opportunity. 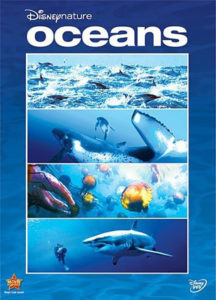 Dive into Oceans from Disneynature – The studio that brought you EARTH for a spectacular story about remarkable creatures under the sea. Stunning images await as you journey in to the depths of a wonderland filled with mystery, beauty and power.

It’s an unprecedented look at the lives of these elusive deepwater creatures through their own eyes. Incredible state-of-the-art-underwater filmmaking will take your breath away as you migrate with whales, swim alongside a great white shark and race with dolphins at play. Filled with adventure, comedy and drama, OCEANS is a fascinating and thought-provoking experience you’ll never forget. 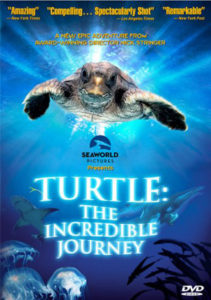 Turtle: The Incredible Journey is a critically-praised, award-winning film that follows the life and migration of a loggerhead turtle from hatching to maturity and a return to its original Florida nesting grounds.

The loggerhead turtle, a threatened species, has one of the longest and most difficult migratory patterns of any marine animal: Sea turtles newly hatched on the East Coast of the United States (usually in Florida) make their way from the sand into the ocean, and then begin a voyage that can span the entire Atlantic Ocean, only to return decades later to that same beach.

March of the Penguins 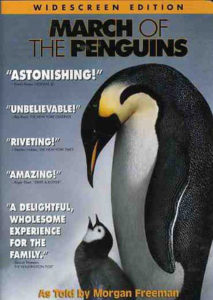 This breathtakingly beautiful documentary chronicles the heroic and harrowing journey that emperor penguins make amid subfreezing temperatures and violent snowstorms at the South Pole in order to mate. It’s a scientific enigma that these flightless aquatic birds leave, at summer’s end, the watery element that is most favorable for their survival to travel hundreds of miles to engage in their annual mating ritual on treacherous Antarctic ice floes.

With a determination that rivals that of the animals he documents so impressively, biologist and filmmaker Luc Jacquet spent more than a year documenting the emperor penguins’ epic struggle not just to reproduce, but also to survive the March Of The Penguins. 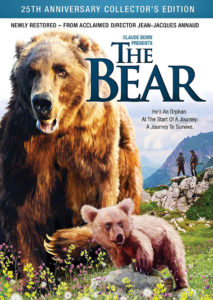 The Bear is a sheer triumph of cinema in the wild! Notable for its stunning cinematography, minimal dialogue, and outstanding animal performances, director Jean-Jacques Annaud’s (Quest For Fire, The Name of the Rose) astonishing tale of wilderness survival has thrilled and charmed audiences and critics all over the world.

Set in 19th-century British Columbia, The Bear follows the story of a young cub and an adult Grizzly as they join forces to survive the perils inherent in their mountain habitat. With each passing obstacle, the two bears further develop a friendship that can only make them stronger: but will it be enough for them to overcome their most deadly enemy?

An adventure story with heart and humanity, The Bear remains a breathtaking and powerful experience decades after its original release. Presented here in a special 25th Anniversary Collector’s Edition from Shout! Factory, The Bear proves itself a film to celebrate again and again. 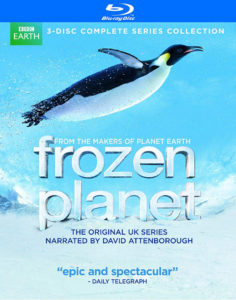 From the Emmy-winning team behind Planet Earth and The Blue Planet comes Frozen Planet, the epic tale of two disappearing wildernesses. The Arctic and Antarctic remain the greatest wildernesses on Earth. The scale and beauty of the scenery and the sheer power of the elements are unmatched anywhere else on our planet. And against all odds, these vast, frigid environments are teeming with life.

Using the latest camera technology, Frozen Planet captures unimaginable imagery above and below the ice, and follows the extraordinary fluctuations that accompany the changes of seasons in this most extreme of environments, often for the first time. Frozen Planet takes you inside a polar bear’s den to witness a mother polar bear and her newborn cubs, showcases the thrilling hunting tactics employed by a pod of killer whales to launch a seal off an ice floe, uses time-lapse photography to allow you to witness the amazing underwater fauna thriving around Mr. Erebus, the world’s most southerly volcano, and much, much more.

Using crystal clear high definition cinematography, Frozen Planet will open your eyes to the remarkable colors and variety of life in this frigid environment. With the Poles under grave threat from climate change, this extraordinary series provides a chance to explore these great wildernesses before they change forever. 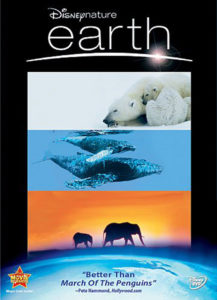 An epic story of adventure, starring some of the most magnificent and courageous creatures alive, awaits you in EARTH. Disneynature brings you a remarkable story of three animal families on a journey across our planet — polar bears, elephants and humpback whales.

Filmed with spectacular clarity and beauty, EARTH is both majestic and intimate as it captures rare footage of nature’s wildest and most elusive animals. From the landmark Disneynature collection, EARTH is an astonishing and heartwarming film filled with adventure, suspense and humor that will take your breath away. 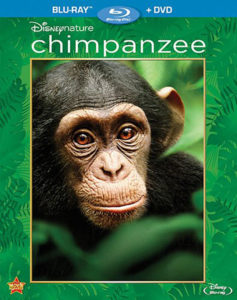 From Disneynature, the studio that brought you EARTH, OCEANS and AFRICAN CATS, comes CHIMPANZEE – a remarkable story of individual triumph and family bonds. Journey deep into the African rainforest and meet Oscar, an adorable young chimp with an entertaining approach to life.

The world is a playground for little Oscar and his fellow young chimps who love creating mayhem. Full of curiosity, a zest for discovery, joy and a love for mimicking others, they are some of the most extraordinary personalities in the animal kingdom. Stunning high-definition images bring you up close and personal as Oscar and his family navigate the complex territory of the forest.

It’s an inspiring and life-changing adventure that overflows with courage and charm. And it will capture your heart.