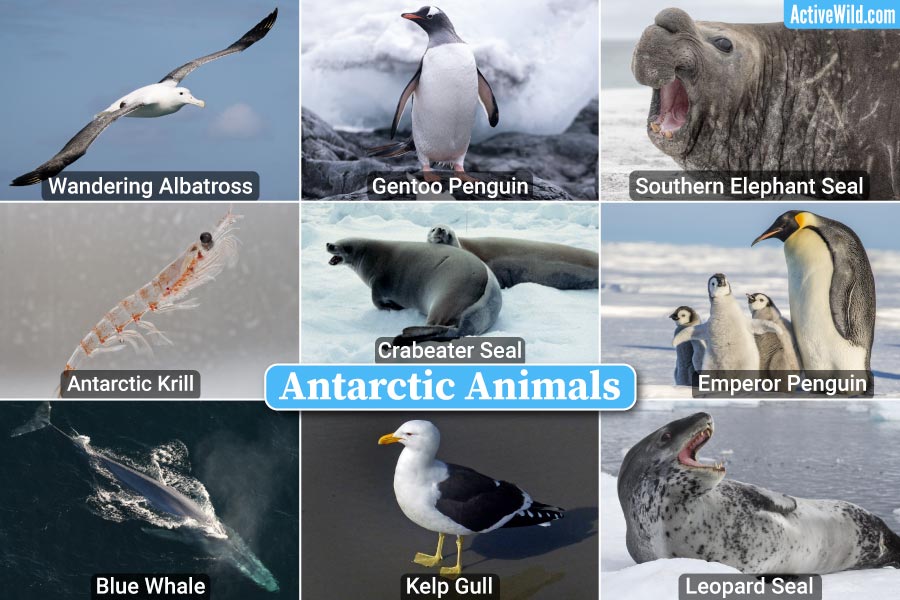 Antarctic animals list, with pictures and information. Discover the amazing animals that live in one of the world’s harshest environments.

Antarctica is a vast frozen continent at the far south of the world. It is covered in a thick layer of ice, and surrounded by the icy waters of the Southern Ocean.

The Antarctic region includes the continent of Antarctica, together with the surrounding sea, ice shelves and island territories that fall within the Antarctic Convergence – an area where the cold Antarctic seas meet the warmer subantarctic waters.

This list of Antarctic animals contains species found throughout the Antarctic region.

The Antarctic is a cold, inhospitable place. It has a low biodiversity, which means that, compared to other parts of the world, only a small number of species are found here.

On the continent of Antarctica itself, very little life exists in the frozen interior. Most species are found on or around the coasts, particularly on the Antarctic Peninsula; the northernmost part of Antarctica.

Life in the Antarctic is a constant struggle. Let’s meet some of the animals who call this cold polar region their home …

The Wandering Albatross has an average wingspan of 3.1 m (10.2 ft.); the largest of any bird. It spends most of its life in flight, only landing in order to feed and to breed.

It may be small, but the Antarctic Krill is one of the most important animals in the Antarctic food chain. This small, shrimp-like crustacean is found in vast numbers in the Southern Ocean, forming groups called swarms which can be seen from space.

Antarctic Krill grow to around 6 cm (2.4 in). Krill is eaten by many other Antarctic animals, including whales, seals and seabirds.

The total biomass (weight) of all of the Antarctic Krill in the world is thought to be larger than that of any other species.

The wingless Antarctic Midge grows up to 6 mm (.25 in) in length. It is the largest land animal (i.e. one that lives purely on land, and doesn’t fly or swim) in Antarctica. It is also the only insect on mainland Antarctica.

This tiny, insect-like animal grows to only 1-2 mm in length and can survive in temperatures as low as -30°C (-22°F). It has a natural chemical antifreeze in its body to prevent it from freezing.

The Arctic Tern is a small seabird with mainly white plumage, bright orange legs and bill, and a black ‘cap’.

This incredible animal travels further than any other bird in one year, and is known to cover distances of around 40,000 km (25,000 miles) each year.

The Arctic Tern breeds in the Arctic before making its way south to the Antarctic. This is why you’ll find it in our Arctic Animals List, as well as in this Antarctic Animals list.

The Colossal Squid is also known as the Antarctic Squid. It grows up to 14m (46 ft.) and is thought to be the world’s heaviest squid (and therefore the world’s largest invertebrate).

The Antarctic Octopus grows to almost 1 metre (3 ft.) in length, and has special venom that doesn’t freeze at sub-zero temperatures.

The Hourglass Dolphin is a small dolphin that is found in Antarctic and subantarctic regions. Its black and white markings make it look like a mini orca. It is very rarely seen.

The Icefishes are a family (Channichthyidae) of at least 16 species found in the Southern Ocean. Icefish blood is colourless because it lacks hemoglobin (the chemical that processes oxygen). It isn’t needed by the Icefish, as the cold Antarctic water contains more oxygen than warmer waters. The lack of hemoglobin makes the Icefish look white.

The Antarctic Shag lives on the Antarctic Peninsula of Antarctica, and on other islands in the Southern Ocean. It is a large bird, with a white chest and black wings and back.

Like several other shags of genus Leucocarbo, the Antarctic shag has distinctive rings of blue skin around its eyes, a feature that has given birds in this group the alternative name of “blue-eyed shags”.

The Kelp Gull is a mid-sized gull with black / dark gray wings, white head and white chest. The species is found throughout the southern hemisphere, with one subspecies, Larus dominicanus austrinus being found in Antarctica and surrounding islands.

The marbled rockcod belongs to the family Nototheniidae, a group of fish found in the Southern Ocean, whose members are known as “notothens” or “cod icefish”.

Cod icefishes have high amounts of fat for insulation, and their bodies produce antifreeze proteins; both are adaptations for life in the cold Southern Ocean.

The Marbled Rockcod was a victim of overfishing in the 20th century, which decimated its population.

Alaskozetes antarcticus is a microscopic mite that lives on Antarctica. It eats vegetation and can survive in sub-zero temperatures.

Nematodes are also known as roundworms. There are many different types of nematodes, some of which have adapted to life in Antarctica.

The orca, also known as a killer whale, is a toothed whale and member of the Oceanic Dolphin Family, Delphinidae. An apex predator, the orca sits at the very top of the ocean food chain.

The diet of the orca includes seals, fish and even other whales. The species is found in all of the world’s oceans, including the Southern Ocean around Antarctica.

Penguins have small, powerful wings, which they use as flippers, “flying” through the water in pursuit of krill, fish, and other prey.

Other penguin species, such as the King Penguin and the Rockhopper Penguin, are also found on subantarctic islands near Antarctica.

The word “petrel” appears in the names of several birds within the order Procellariiformes. All petrels are seabirds that only return to land to breed. Several petrel species are found in the Antarctic, including the Snow petrel (Pagodroma nivea), Antarctic petrel (Thalassoica antarctica), Antarctic giant petrel (Macronectes giganteus), Cape petrel (Daption capense) and Antarctic prion (Pachyptila desolata).

The snow petrel breeds exclusively in Antarctica, and breeds further south than any other bird.

Phytoplankton are microscopic plants that drift in the upper layer of the sea. They live off carbon dioxide and obtain energy by photosynthesis. They are part of the important lower level of the Antarctic food chain.

Rotifers are a group of over 2,000 mostly microscopic animals that together make up the phylum Rotifera. Rotifers are found in many parts of the world, and are present in Antarctic water and soil.

Seals belong to a group of marine mammals known as pinnipeds. This group also contains sea lions and the walrus.

(Marine mammals are mammals that either live in the sea, or whose lifestyle is reliant on the sea.)

Like many marine animals, the spectacled porpoise has a black back and white undersides. This is a form of camouflage known as “countershading” that conceals the animal from both above and below.

Skuas are seabirds found in many parts of the world. Many skuas are “kleptoparasites” – a term given to animals that steal food that has been caught by other animals. Skuas will also eat other seabirds and their chicks.

South Polar Skuas are large, powerful birds that breed on the Antarctic coast during November and December and spend winter in warmer regions. (When it’s summer in the Southern Hemisphere, it’s winter in the Northern Hemisphere.)

The brown skua, also known as the Antarctic Skua, is a large, powerful bird that, like the other skuas, will steal food from other birds.

The brown skua breeds in Antarctic regions and migrates north during other times of the year.

The Snowy Sheathbill is a pigeon-sized bird with white feathers and a pink face. It is both a scavenger and a kleptoparasite. It is the only land bird native to Antarctica that isn’t a penguin.

Tardigrades, or “water bears”, are microscopic animals with eight legs. Tardigrades are known for their ability to withstand extreme conditions, and have been found on mountains and in the deep sea, as well as on Antarctica.

Whales are large marine mammals belonging to the infraorder Cetacea, which also includes dolphins and porpoises.

Whales are attracted to the cold waters of the Antarctic region by the huge swarms of Antarctic Krill (which you can read about further up this Antarctic animals list) that are present in the Southern Ocean.

Wilson’s storm petrel is one of the world’s commonest species of bird. Found all around the Southern Hemisphere, and in many parts of the Northern Hemisphere, it spends its life at sea, only returning to land to breed.

Zooplankton are animals that drift in the sea. The word “Zooplankton” is derived from the Greek words for “animal” and “drifter”. Most Zooplankton are very small, and eat microscopic plants called phytoplankton.

Zooplankton include the larvae of shrimps and crabs, and most are too small to be seen with the naked eye. However, Zooplankton also includes larger animals such as Krill and Jellyfish.

Zooplankton form an important part of the Antarctic food chain.

We hope that you have enjoyed learning about the many different kinds of Antarctic animals. There are far fewer species found in the Antarctic than in other, more biodiverse, areas such as rainforests. However, the species that do manage to exist on and around this freezing continent are especially interesting, due to the special adaptations they have had to evolve.

If there is an animal on this list that you are particularly interested in, why not learn a bit more about it? You could try to find out its conservation status, if it has any special adaptations for Antarctic life, and what it eats … or what eats it!

You can find more information about the earth’s Polar Regions on the following pages:

Discover Amazing Animals From All Around The World