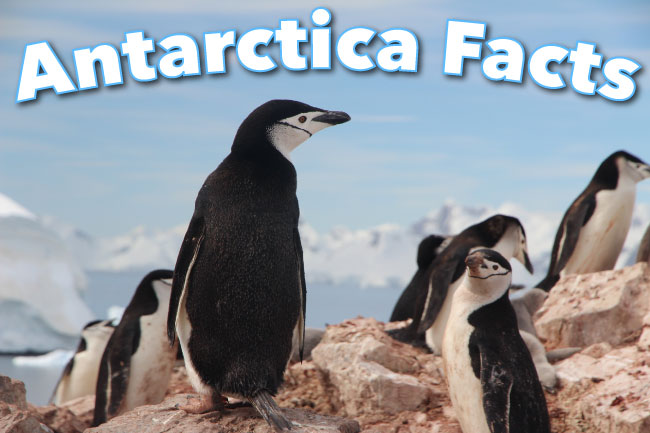 In Antarctica Facts For Kids, we’ll be exploring the vast frozen continent of Antarctica. We’ll find out about its location, its climate, its animals and plants, and how it was discovered.

Discover interesting facts about Antarctica by looking out for the blue text!

A Complete Guide To Antarctica

On this page you’ll find a complete guide to Antarctica. You can also check out the pages below for even more Antarctica facts & information!

Antarctica is an ice-covered continent that covers the southernmost part of the world. The South Pole is located in Antarctica. Antarctica is surrounded by the Southern Ocean.

If you were to sail due south from either Chile, South Africa, Australia or New Zealand, you’d get to Antarctica! In fact, because the South Pole is in Antarctica, by flying south from anywhere in the world you’d eventually reach the continent.

Antarctica is at the ‘bottom’ of most globes.

Almost all of Antarctica is located within the Antarctic Circle, an imaginary line that circles the southern part of the world.

Click on the map below to see a larger image:

The South Pole is in East Antarctica.

Click on the map of Antarctica above to explore the continent. (Map provided by NASA’s LIMA Project.)

Is There Land Under Antarctica?

Although it’s buried by thick ice, there is land under Antarctica. There is therefore land under the South Pole. The same can’t be said of the North Pole, which is located on the frozen ice of the Arctic Ocean.

The ice sheet is continually moving, forming glaciers and huge ice shelves that float on the sea.

If the Antarctic ice sheet were to melt, then the world’s sea level would be raised by 60 m (200 ft.)

The video below gives you a good idea of what Antarctica is like.

How Big Is Antarctica?

Antarctica covers an area of 14 million square kilometres (5.4 million square miles). It is the 5th largest continent after Asia, Africa, North America, and South America. (The two continents that are smaller that Antarctica are Europe and Australia.)

Antarctica’s climate is harsh and unforgiving. It is cold, dry, and frequently swept with hurricane force winds.

There is very little precipitation on Antarctica. In the interior, it falls as snow, and averages 2 inches (50 mm) per year. More rain falls on the Sahara desert that snow on the Antarctic interior.

The climate is slightly milder on the coast and on the Antarctic Peninsula. At the coast, temperatures rise above freezing during the warmest summer month. There is more precipitation – some of which falls as rain in the summer – away from the interior. Antarctic coasts receive an annual rainfoall of around 8 in (200 mm).

The video below shows what a storm in Antarctica looks like.

Is Antarctica a country?

Antarctica is not a country, and doesn’t have a government. Various countries have claimed parts of Antarctica, but these claims aren’t always recognised by other countries.

In 1959, 12 countries signed the ‘Antarctic Treaty’ that prevented countries from claiming parts of Antarctica. The twelve countries were: Argentina, Australia, Belgium, Chile, France, Japan, New Zealand, Norway, South Africa, the Soviet Union, the United Kingdom and the United States. Forty-one countries have since signed the treaty.

The treaty also ensured that Antarctica could only be used for scientific purposes. No military activity is allowed on Antarctica, and mining, nuclear explosions and nuclear waste disposal are also banned.

Since 1994, no non-native species (other than humans!) are allowed on Antarctica.

Do People Live On Antarctica?

Most of the people who live on Antarctica are scientists and support staff. In the summer, only 5,000 people live on the continent. Only around 1,000 people remain during the winter.

Antarctica has no indigenous peoples.

British naval captain James Cook and his crew were the first people to enter the Antarctic circle. However, although they sailed within 150 miles of Antarctica, they were still too far away to actually see the continent.

The first time anyone laid eyes on Antarctica was in 1820, when several expeditions set out to the continent. One was led by Russian explorers Fabian Gottlieb von Bellingshausen and Mikhail Lazarev, and another by English naval officer Edward Bransfield.

Antarctica is an inhospitable place, and has low biodiversity (i.e. not many different species live here). Life can only exist in milder coastal areas and on the Antarctic Peninsula.

There are no terrestrial mammals on Antarctica. Several species of seal, including the Elephant Seal and Antarctic Fur Seal, are found on the Antarctic coast.

There are no reptiles or amphibians on Antarctica.

Antarctica’s most famous inhabitants are its penguins. Five species breed on Antartica itself: the Chinstrap Penguin, Adelie Penguin, Emperor Penguin, Gentoo Penguin and Macaroni Penguin. Other species breed on the surrounding islands.

In spring, around 100 million birds, including gulls, petrels, sheathbills and terns, nest on the coasts of Antarctica and the surrounding islands.

We hope that you have enjoyed this quick introduction to one of the world’s most amazing places. Now that you know all about Antarctica, why not take a trip to the opposite side of the world and learn some amazing Arctic Facts?

If you enjoyed reading this article please be sure to give it a mention on social media, and tell your friends to visit!

You can also sign up to our email newsletter and discover more about our amazing world and the living things that call it home!