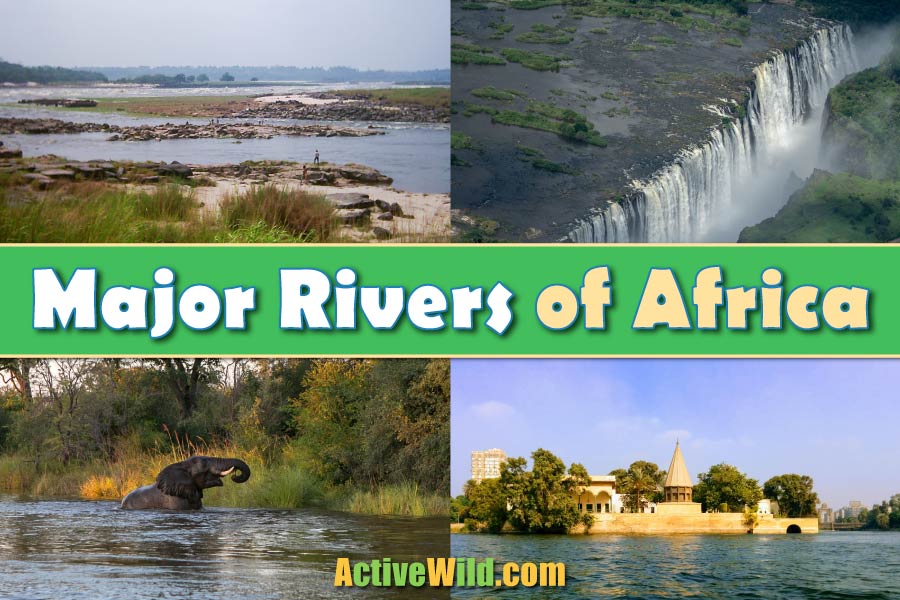 The major rivers of Africa include the Nile, Congo, Niger, Zambezi and Orange. These waterways are of vital importance to a continent in which many people live in poverty and many regions are dry. Africa’s rivers bring life to otherwise infertile and barren regions, enabling people to grow crops, catch fish and transport natural resources.

The great rivers of Africa have brought explorers and missionaries into the continent’s heartlands and to this day are a source of fascination for anyone interested in the continent’s history and geography.

The Nile is Africa’s longest river and, according to some, the longest river in the world (others believe the Amazon to be longer). It flows northwards from East Africa, eventually discharging into the Mediterranean at the Nile Delta on the coast of Egypt.

The Nile River has two major tributaries: the White Nile and the Blue Nile. The White Nile is the longer of the two, but contributes only 20% of the water where they join near Khartoum in Sudan.

The Blue Nile has its source in Ethiopia.

The origin of the White Nile’s waters remains undetermined, with some modern explorers claiming that the first drops of water destined to form the Nile rise in the mountains of Burundi, while others state that a river from the forests of Rwanda should have this honor.

The Nile valley has been populated for at least 6,000 years. It was a center for early civilizations in Egypt and Sudan, and an area of great cultural significance. The waters of the River have sustained agriculture, culture, transport, trade and tourism for centuries in Ethiopia, Sudan and Egypt.

The annual flooding of the Nile used to provide fertile silt for the cultivation of crops, but since the Aswan High Dam was completed in the 1960s, the levels of water have been regulated to prevent flood damage.

Today, control of the waters of the Nile is an important geopolitical issue, as countries along the course of the River build dams, trap water flow for hydroelectric schemes and utilize more and more of the water for the needs of their growing populations.

Interesting Fact: The River Nile has flowed along the same course for at least the past 30 million years.

The Congo River is the second-longest river in Africa and the ninth longest in the world. It discharges a massive amount of water at its mouth, second only to the Amazon in this respect. It is also the deepest river in the world, being 720 ft (220 m) deep in places. The Congo is the only river in the world that crosses the equator twice.

This powerful river conjures up images of rainforest animals such as gorillas, chimpanzees, bonobos, forest elephants, okapis and different types of monkey, all of which can be found along its banks. The Congo River basin has the highest diversity of fish species of any African river system.

The current position of the River became established 1.5–2 million years ago, and its course today includes many rapids, waterfalls, swamps, lakes and islands.

The first European to see the Congo River was the Portuguese explorer Diogo Cão, who sailed into the estuary in 1842.

The waterways allow the transport and trade of goods such as cotton, coffee, timber, minerals and rubber from many places where there is no access by road.  It is estimated that 75 million people live in the Congo River basin today, many of whom are reliant upon this mighty River for their livelihoods.

Interesting Fact: The Congo River does not form a delta where it flows into the ocean, which is unusual among large rivers. Instead, the huge volumes of water enter the sea through a narrow, deep channel. In fact, the water flow has carved an underwater canyon that stretches 85 km out to sea and is over 3,200 ft (1,000 m) deep in places.

The Niger River, the third longest river in Africa, rises in the mountains in southwestern Guinea, West Africa.

Even though its source is only 150 mi (240 km) from the Atlantic Ocean, the Niger River does not flow towards the sea. Instead, it flows inland, straight into the Sahara Desert. It makes a wide arc and turns southeast near the ancient city of Timbuktu in Mali, thereafter flowing southwards to the Niger Delta, where it enters the Atlantic Ocean via the Gulf of Guinea.

The British explorer Mungo Park mounted two expeditions (in 1795 and 1804) to identify the River’s course from source to mouth. He attempted to paddle a boat the entire distance and was much plagued by local tribesmen, who made numerous attacks on his boat as he passed.

Park’s party was well armed and repulsed the attacks, killing many tribesmen in the process. Eventually however, one such attack saw his boat run aground. Park was forced to abandon the craft and subsequently drowned, leaving his quest to reach the river’s mouth incomplete.

Only in 1830 did the British brothers Richard and John Lander finally confirm that the River discharges into the Atlantic through the Niger Delta.

Most of the Niger River is navigable, although larger commercial ships are restricted to the lower reaches and to times when the water levels are high. Smaller boats can travel easily along the River and its waterways have been used for trading and travel for centuries.

In the middle reaches, just before the River reaches Timbuktu, the gradient of the land becomes shallower and the water spreads out, forming numerous interlinked streams, marshes, channels and lakes. This is the Inner Niger Delta, a fertile oasis in the surrounding dry Sahel of Mali. It floods seasonally and is important for the cultivation of crops and as a refuge for thousands of birds.

The city of Timbuktu originated around 1,000 years ago as a place of meeting between Saharan pastoralists and riverboat traders. It was an important location for the trade of gold and slaves during the middle ages and a major center of learning and Islamic scholarship.

Interesting Fact: The Niger Delta was, at one time, known as the “Slave Coast” because almost half of the slaves exported from Africa during the time of slavery came from this area.

The Zambezi is the longest eastward-flowing river in Africa. It is considered to be relatively pristine and unexplored, and is home to many great wildlife areas and populations of spectacular animals and birds.

The upper Zambezi is mostly slow-flowing due to the flat topography of the land. In places, it forms floodplains where the River is shallow and up to 15 mi (25km) wide. The upper reaches are sparsely populated and the annual flooding influences the people’s lives since they have to move their homes and stock to higher ground.

David Livingston, the British missionary and explorer, followed the Zambezi along its middle and lower reaches. In 1855 he discovered and named the Victoria Falls, also known as Mosi-oa-Tunya (‘the smoke that thunders’) locally. The waterfall is at least 4900 ft (1,500 m) wide and forms the largest curtain of falling water in the world. It is also one of the seven natural wonders of the world.

Two large dams, Kariba and Cahora Bassa, have been built on the Zambezi to control water flow and generate hydroelectricity. They have caused significant changes to the ecosystems of the Zambezi floodplains.

The Zambezi flows between Zimbabwe and Zambia, then wends its way through Mozambique before finally discharging to the Indian Ocean.

Interesting Fact: Tigerfish are common in the Zambezi and fishermen come from all over the world to catch these feisty fish.

The Orange River is one of the longest rivers south of the tropics. It rises in the Drakensberg Mountains at an altitude of 9,840 ft (3,000 m) and flows westwards across South Africa to its mouth on the Atlantic coast.

Originally known as the Gariep River, the Orange River was renamed by Dutch explorer Colonel Robert Gordon in 1779 in honor of Dutch Prince William of Orange.

Co-incidentally, the waters of this River are actually orange in places, due to the color of the suspended clay and silt.

As the River flows westwards it enters first the Gariep Dam, then the Vanderkloof Dam, both of which act as reservoirs to supply water to the drier parts of the country. The dam waters are also used to generate hydroelectricity. Further downstream, the Orange is joined by its largest tributary, the Vaal River.

In its lower reaches, the Orange flows through the Namib Desert and other arid regions. Here, the river provides water for irrigation schemes that allow the growing of crops such as cereals, grapes, olives, nuts and dates.

Due to its deep, vertical-sided gorges, rapids and waterfalls such as the Augrabies Falls, the lower reaches of the Orange are not navigable. Sandbars and rapids block the river 30km from its mouth, preventing access from the ocean.

Interesting Fact: The, the Eureka Diamond – the first found in South Africa – was discovered near Hopetown on the Orange River. Today, alluvial diamonds are still recovered from the Orange River, and several diamond mines operate in the lower reaches and at the mouth.

We hope that you’ve enjoyed reading about the major rivers of Africa. You can find out more about Africa and related subjects by visiting the pages below: