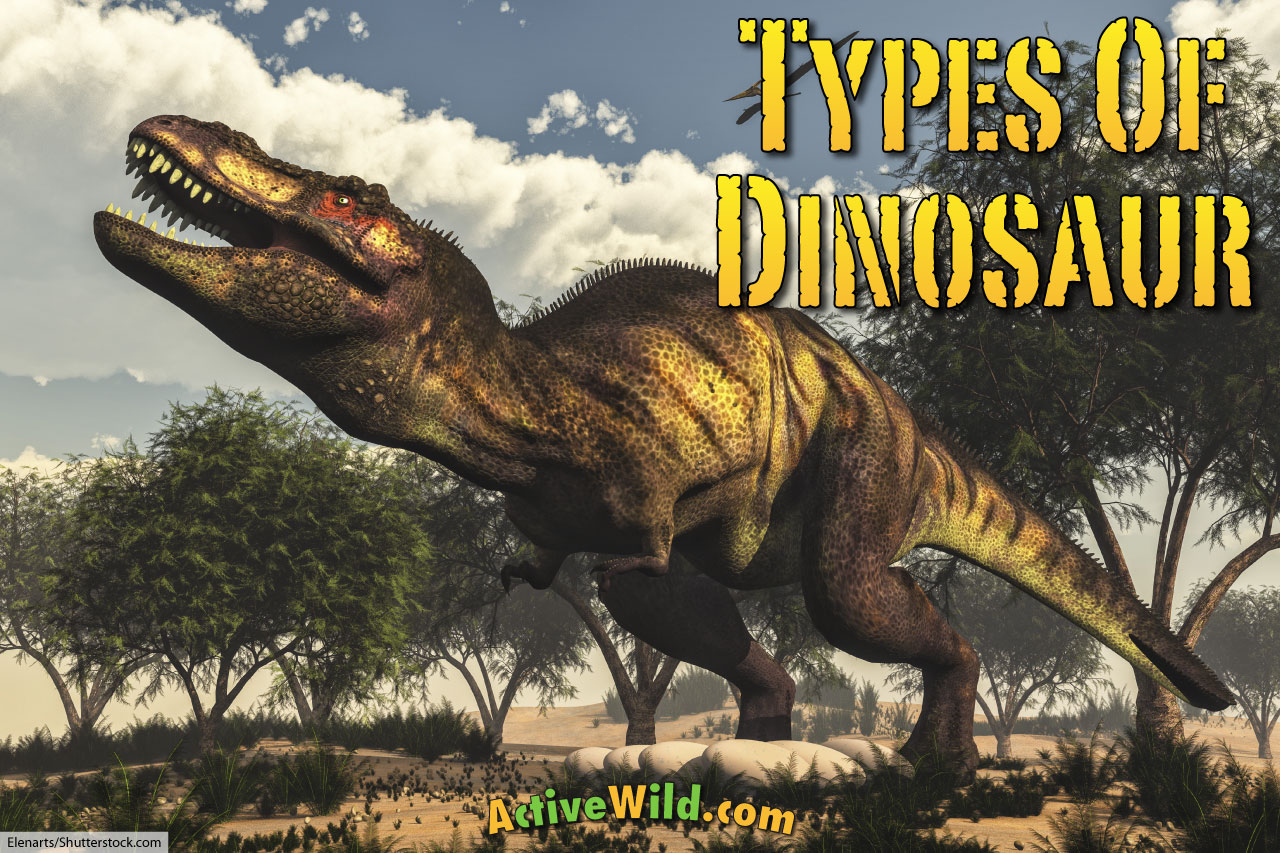 On this page we’re going to look at the different types of dinosaurs. Dinosaurs came in many different shapes and sizes. To make it easier to understand how dinosaurs lived and evolved, scientists place dinosaurs into various groups – just as they do with all other types of animal.

Rather than looking at individual species or genera, such as ‘Tyrannosaurus Rex’ or ‘Iguanodon’, we’re going to be looking at these larger groups of dinosaurs. For each group, you’ll find a list of example dinosaurs.

We’ve included some of the main ‘large’ groups of dinosaur, such as Theropods and Ornithischians, and we’ve also listed some famous dinosaur families, such as the fearsome Tyrannosauridae and the herbivorous Hadrosauridae.

(This section is a brief introduction to how dinosaurs are grouped. Scroll down if you just want to see a list of the different types of dinosaurs!)

Dinosaurs, like all living things, can be grouped together depending on their physical characteristics and how closely they’re related to each other. Biologists call this ‘classification’.

Animal groups start off large – for example, ‘reptiles’, then get smaller and smaller until you are left with ‘genera’, which are very closely-related species, and finally the individual species themselves. (Genera is the plural of ‘genus’, a Latin word which means ‘origin’, or ‘type’.)

All living things are organized into groups. One of the biggest types of group is a ‘kingdom’. You may have heard of the ‘animal kingdom’, the group that contains all animals.

Dinosaurs, mammals, amphibians and humans are all in the animal kingdom.

It’s only paleontologists (and other clever people) who would talk about Iguanodon bernissartensis, which is an individual species of Iguanodon.

In fact, most people have only heard about one species of dinosaur – the Tyrannosaurus Rex, which is a species of Tyrannosaurus. All of the other famous dinosaur names, such as Spinosaurus, Allosaurus and Velociraptor, are genera.

Science doesn’t stand still: as we discover more about dinosaurs, the way in which different types of dinosaurs are classified is likely to change.

On this page we’ll learn about the different types of dinosaurs, and how they are currently grouped.

The Two Main Types Of Dinosaur

There are two main types of dinosaur: saurischia and ornithischia.

He called the lizard-hipped dinosaurs ‘saurischians’, which comes from the Greek for ‘lizard hip joint’.

Those with bird-like hips he named ‘ornithischians’, which comes from the Greek for ‘bird hip joint’.

Confusingly, the ornithischian, or bird-hipped, dinosaurs were NOT the ancestors of birds. Birds evolved from a group of saurischian (lizard-hipped) dinosaurs called theropods.

Tyrannosaurus, Spinosaurus, Velociraptor: all of these famous predatory dinosaurs were theropods. The word ‘theropod’ comes from the Greek for ‘wild beast foot’.

Theropods first appeared in the late Triassic period, and were present all the way up to the Cretaceous–Paleogene extinction event which brought the reign of the dinosaurs to an end.

However, the Cretaceous–Paleogene extinction event wasn’t actually the end for the theropods. One group had already branched off and evolved into birds.

You only have to look out of your window to see that birds – all of which are descended from theropod dinosaurs – are very much alive today!

Maniraptora is a branch of bird-like dinosaurs. They first appeared in the Jurassic Period, and are the ancestors of modern-day birds. This group of dinosaurs includes the Dromaeosauridae (raptor) family.

Dromaeosauridae are sometimes known as ‘raptors’. They were small to medium-sized feathered dinosaurs that appeared in the mid-Jurassic period.

Abelisauridae is a family of theropod dinosaurs that lived in Africa, South America and Asia during the Cretaceous period.

Named after the Tyrannosaurus (which means ‘tyrant lizard’), Tyrannosauridae is a family of bipedal meat-eaters. Tyrannosaurids are known for their huge skulls, powerful jaws, and short arms.

Perhaps the most famous dinosaur of all, Tyrannosaurus Rex, was a member of the Tyrannosauridae family.

The spinosaurids were another family of large, bipedal, meat-eating dinosaurs. Spinosaurids had long, thin, crocodile-like skulls. Some members of this family, such as Spinosaurus and Baryonyx, were specialized fish-eaters.

Spinosaurus itself had a large sail on its back. This was held up by spine-like bones, from which it got its name (Spinosaurus means ‘spine lizard’). The Spinosauridae family was named after Spinosaurus, but not all members of the family have a similar sail.

Carcharodontosauridae is a family of dinosaurs that includes some of the largest land carnivores that ever lived. The name comes from the Greek for ‘shark-toothed lizards’.

The sauropods were a group of saurischian dinosaurs. Many sauropods grew to incredible sizes, and the group contains the biggest land animals ever to walk the earth.

Giant dinosaurs such as Apatosaurus, Diplodocus, and Titanosaurus were all sauropods.

A typical sauropod had a large barrel-shaped body, a long neck, a small head, and a long, powerful tail. It stood on four tree-trunk like legs.

Diplodocidae is a family of sauropod dinosaurs. Members of this family typically had very long bodies, but were not as tall as other sauropods.

Titanosaurs were a group of sauropod dinosaurs that appeared in the early Cretaceous and lived right up to the end of the Mesozoic era. The group includes Argentinosaurus, a genus which, although only known from a small selection of bones, was possibly the largest ever land animal.

As we’ve seen, the Ornithischian (bird-hipped) dinosaurs were one of the two main types of dinosaurs (the other being the lizard-hipped Saurischians).

Some of the best-known types of Ornithischian dinosaurs are listed below.

Thyreophora was a branch of ornithischian dinosaurs. Thyreophora means ‘shield bearers’. Another name for this group is ‘armored dinosaurs’.

Thyreophorans were heavily armored with thick skin and rows of plates running along their bodies. Many were further protected by spikes and tail clubs.

Stegosauria was a group of armored dinosaurs that had rows bony of plates running along their backs. Stegosaurus is the best-known Stegosaurian, but several other genera have been discovered.

Ankylosauria was a group of armored dinosaurs that lived throughout the Mesozoic era. They were large, powerful, four-legged animals. All were heavily armored, and some developed tail clubs which may have been used as defensive weapons against predators.

Ankylosaurus is the best known dinosaur in this group.

Ornithopods were a branch of Ornithischian dinosaurs that appeared in the mid Jurassic Period and lived to the end of the Cretaceous Period. They had three-toed feet, beaks, and an advanced (for a dinosaur) chewing ability.

Hadrosaurids are also known as ‘duck-billed’ dinosaurs due to their wide mouth parts. Hadrosauridae is a family of ornithopods descended from the Iguanodontians. Many Hadrosaurids were able to walk on both two and four feet; they would use all four feet when grazing, but would run using just their hind legs.

Pachycephalosaurians may have fought each other by ramming their heads together – just as deer stags fight to establish dominance today.

An example pachycephalosaurian is Stegoceras, a small bipedal dinosaur with a domed head.

Ceratopsia means ‘horned faces’. This group of dinosaurs became common in the Cretaceous period and were found in North America, Europe and Asia. Like all Ornithischians, Ceratopsians were herbivorous. They had beak-like mouth parts. They ranged in size from 1 meter (3.3 ft.) to 9 meter (30 ft.) long, 9 tonne giants.

The best-known Ceratopsian was Triceratops, a large, powerful quadruped that had three distinctive spikes on its face and a bony frill at the back of its head.

When learning about dinosaurs, it’s important to remember that they were on Earth for tens of millions of years longer than humans have been.

This gave the dinosaurs plenty of time to branch off and evolve into different types of dinosaur. Dinosaur species had been appearing – and becoming extinct – for millions of years before the mass extinction event at the end of the Cretaceous period that killed off the last non-avian dinosaurs.

After watching films such as Jurassic Park it’s easy to forget that not all types of dinosaur lived together. Even dinosaurs that lived in the same period may have been separated for millions of years.

For example, 57 million (or more) years passed between the disappearance of baryonyx walkeri and the appearance tyrannosaurus rex, yet both species lived during the Cretaceous Period.

Like all living animals, dinosaurs can be classified into different groups. However, our entire knowledge of dinosaurs stems from fossilized remains that have been in the ground for an almost unimaginable length of time.

This is why, as we unearth more and more fossils, our understanding of dinosaurs – and the relationship between different types of dinosaurs – is continuously changing.

We hope that you have enjoyed learning all about the different types of dinosaur. You can find plenty more dinosaur information on the following pages: