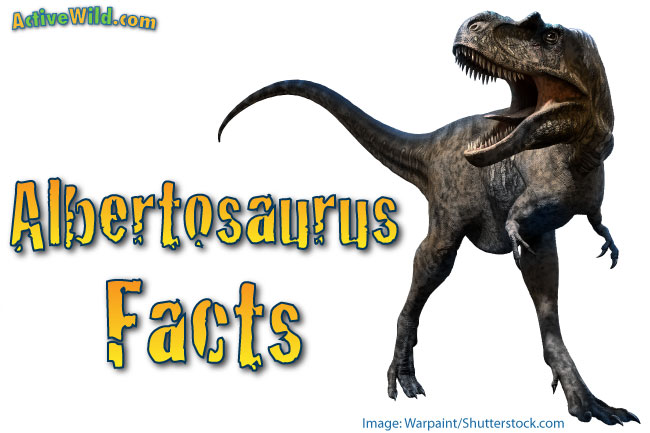 Albertosaurus isn’t as famous as its close relative Tyrannosaurus, but this large meat-eater was just as fierce! This page contains Albertosaurus facts, pictures and information for kids, students and adults, and is part of our Dinosaur Facts series.

Albertosaurus was a large, meat-eating dinosaur that lived in the late Cretaceous period. Although it was less than half the size of its close relative the Tyrannosaur, it was still a ferocious predator.

Albertosaurus looked very much like its bigger cousin. It walked on two powerful hind legs, and had short arms. Its long, flexible tail provided balance, and it had a large head with powerful jaws.

Its strong hind legs would have allowed Albertosaurus to run at high speeds – possibly up to around 19 mph (30 km/h).

Albertosaurus had short, blunt horns or crests above its eyes. These may have been brightly colored, and used to attract a mate.

Albertosaurus’s eyes were on the sides of its head. Its eyesight probably wasn’t as good as that of Tyrannosaurus, whose eyes looked straight ahead.

Albertosaurus’s short arms each ended with two claws. Its feet each had three main claws, with a fourth, smaller, claw positioned further up the leg.

Albertosaurus specimens are sometimes found in groups. This had led paleontologists to believe that they lived – and possibly hunted – in packs.

Albertosaurus grew to about 9 meters (30 ft.) in length. It weighed up to 2 metric tonnes (2.2 short tons) – about the same as a large family car.

Albertosaurus was a member of a large group of dinosaurs called theropods. Theropods appeared in the late Triassic period. Nearly all walked on two legs and were carnivorous.

Albertosaurus was a member of the Tyrannosauridae family. Tyrannosaurids, as they are known, were fearsome predators with huge heads and jaws full of sharp teeth.

Other members of the Tyrannosauridae family include Tarbosaurus, Daspletosaurus and Gorgosaurus (which may actually be the same genus as Albertosaurus). Tyrannosaurus was the largest member of the family. You can read about T Rex – a species of Tyrannosaurus – here: T Rex Facts.

Although both Albertosaurus and Tyrannosaurus lived in the late Cretaceous period, Albertosaurus was around earlier than its bigger cousin.

When Was Albertosaurus Alive?

You can find out more about the Cretaceous, and other periods of the Mesozoic era here: Dinosaur Periods.

What Did Albertosaurus Eat?

Albertosaurus was likely to have been the apex predator – top of the food chain – wherever it was found.

It preyed mainly on hadrosaurs such as Edmontosaurus and Lambeosaurus.

These plant eating dinosaurs were large and heavily built. Albertosaurus would have relied on its speed and strength to catch and subdue its prey. A young Albertosaurus may have had hunted different species than a more powerful, but slower, adult.

Albertosaurus may even have hunted in packs.

Where Was Albertosaurus Found?

Albertosaurus has only been found in Alberta – a province in the west of Canada. The first Albertosaurus was discovered by Joseph Tyrell, a geologist and map-maker. He found the specimen – an incomplete skull – near the Red Deer River in 1884, while conducting a survey of the area.

The name Albertosaurus comes from Alberta, the area in which it was found, and ‘saurus’, which comes from the Greek for ‘Lizard’.

Albertosaurus was named by paleontologist Henry Fairfield Osborn in 1905.

In 1889, another partial Albertosaurus skull was found, near to where the first had been discovered.

In 1910, Barnum Brown, the American paleontologist responsible for discovering the first T Rex in 1900, found the fossilized remains of a large group of Albertosaurus. He uncovered remains from at least 9 individuals.

In 1997, paleontologists from the Royal Tyrrell Museum of Palaeontology (named after Joseph Tyrell, who had found the first Albertosaurus) located the site where Brown had discovered the Albertosaurus group. They found specimens from 13 more Albertosaurus.

Many other Albertosaurus specimens have been discovered in Alberta. Many dinosaur experts also consider Gorgosaurus to be the same as Albertosaurus.

We hope that you have enjoyed learning these Albertosaurus facts. Although smaller than its close relative the Tyrannosaurus, Albertosaurus would have been a fearsome predator – especially if it hunted in packs, as fossil evidence suggest it may have done. 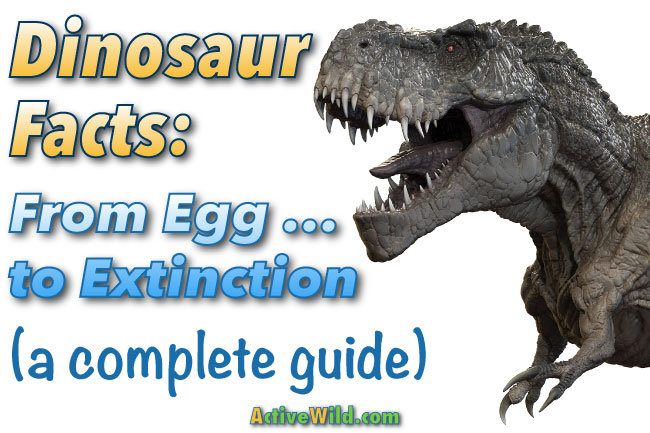 You can find information and pictures of many other amazing dinosaurs here: List of Dinosaurs with Pictures and Facts.

You can find a complete guide to dinosaurs here: Dinosaur Facts and Information.