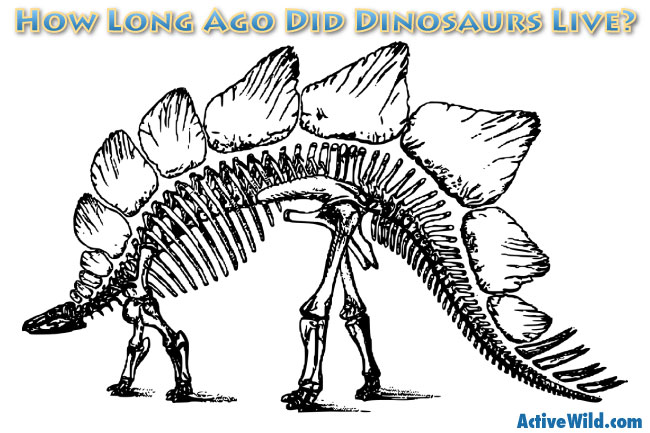 We’ll also talk a little about the Triassic, Jurassic and Cretaceous periods, and the Mesozoic era: the ‘Age of the Dinosaurs’.

This page is part of our main Dinosaur Facts section.

How Long Ago Did Dinosaurs Live?

Dinosaurs first appeared between 243 and 231 million years ago.

They’re big numbers, so it’s worth writing them out in full so you can get an idea just how long ago it was …

At this time, the world was going through what is known as the ‘Triassic Period’. The Triassic period is part of the geological timescale. We’ll learn more about this further down the page.

We’ve only been around for around 2 million years, so we’ve still got a long way to go to beat the dinosaurs!

It’s not as crazy as it sounds! In fact, most scientists today consider birds to be dinosaurs! This is because modern classification systems (how living things are grouped) are concerned with how groups of animals ‘branch off’ to become new species.

Because a group of dinosaurs ‘branched off’ to become birds (over the course of millions of years), birds can be considered to be dinosaurs!

So, when we say that dinosaurs became extinct 66 million years ago, we’re actually talking about all of the dinosaurs that didn’t become birds – i.e. the ‘non-avian’ dinosaurs.

How Long Ago Did Dinosaurs Live: Geological Periods

You may have heard about periods of time such as the Triassic, Jurassic and Cretaceous periods, but do you know what these names actually mean?

The geological timescale is a way of looking at the history of the world that directly relates to the very stuff that the world is made of: rock!

You can learn more about the geological timescale here: Dinosaur Periods.

How Long Ago Did Dinosaurs Live: The Triassic Period 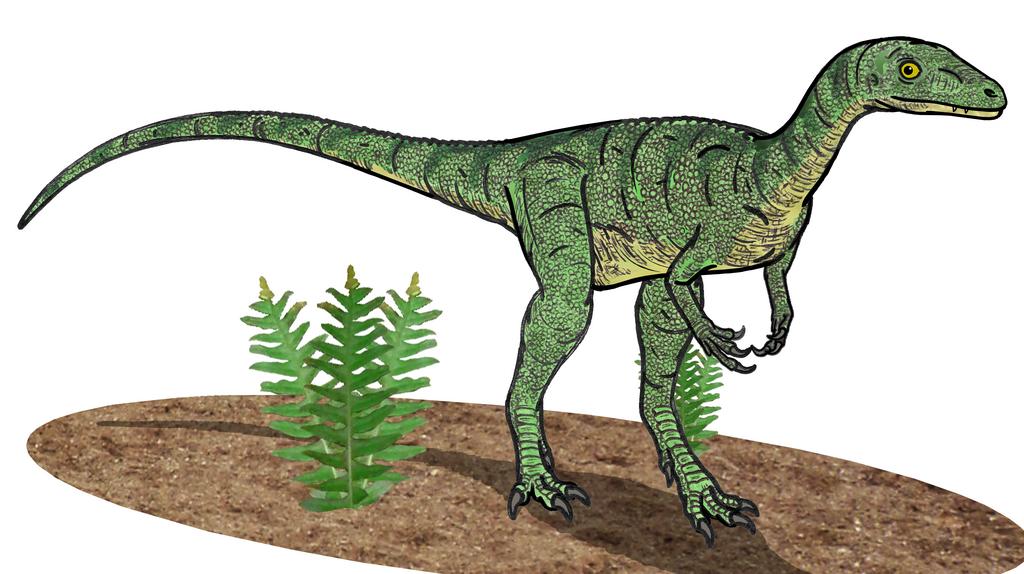 The Eoraptor, shown above, was one of the earliest dinosaurs.

Of course, dinosaurs didn’t just appear out of thin air. They evolved from primitive reptiles, which themselves had evolved from amphibians around 350 million years ago.

A group of early reptiles called Archosaurs became dominant in the early Triassic period. Prior to this, a group of animals called the Synapsids – which would go on to become mammals – had been in charge. Their time would come!

Archosaurs branched into crocodilians (which, with the greatest respect to modern-day crocodiles and alligators, haven’t really changed much over the years), pterosaurs (flying reptiles, such as Pterodactylus), and dinosaurs.

Dinosaurs appeared sometime during the middle or late epochs of the Triassic period.

The earliest dinosaur that we know about is the Eoraptor, a small predator that walked on two legs.

Of course, dinosaurs weren’t the only animals alive back then; insects, lizards, frogs, fish, turtles and other creatures had already made an appearance.

At the end of the Triassic period, around 201.3 million years ago, something caused over 50% of all species to become extinct. This is known as the Triassic–Jurassic extinction event.

We don’t know exactly what caused this; likely explanations include an asteroid impact, or volcanic activity.

Whatever it was that happened at the end of the Triassic period enabled the dinosaurs to become the dominant land animals in the Jurassic period.

During the Jurassic period, dinosaurs branched off into several types, including huge sauropods such as Diplodocus, and fearsome predators such as Allosaurus. The early birds, such as Archaeopteryx, also began to appear.

In the Cretaceous period, more of the familiar names appeared, including dinosaurs such as T Rex, Spinosaurus and Triceratops.

However, the age of the dinosaurs came to an end around 66 million years ago with the Cretaceous–Paleogene extinction event. This caused around 75% of all species to become extinct, including all of the dinosaurs that hadn’t evolved into birds.

You can read more about the Cretaceous–Paleogene extinction event here.

How long ago did dinosaurs live? Conclusion

Next time you’re asked ‘How long ago did dinosaurs live?’ here’s your reply:

Dinosaurs lived for around 177 million years. That’s much longer than they’ve been extinct.

However, dinosaurs still exist – in the shape of birds – so strictly speaking they’re still alive!

We hope that you enjoyed this page. Feel free to link to it or to share it on social media using the buttons provided. You can find more awesome dinosaur information at our main Dinosaur Facts page.