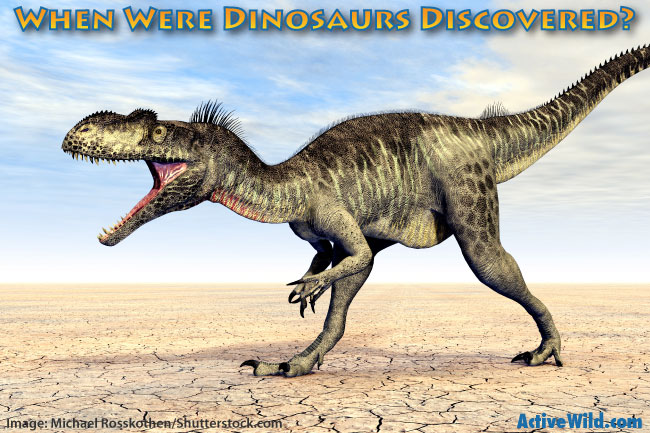 You can find more dinosaur information at our main Dinosaur Facts section.

When Were Dinosaurs Discovered?

In 1824, English geologist William Buckland announced the discovery, based on fossil remains, of a new animal. This animal was the Megalosaurus.

It was the first dinosaur to be given an official name.

However, at the time, scientists didn’t know that Megalosaurus was just one of a group of reptiles that had at one time dominated all of the land on Earth.

A few years later, in 1841, paleontologist Richard Owen saw that Megalosaurus, and other large reptiles that had recently been discovered were all related. He gave the group a name: ‘Dinosauria’, meaning ‘terrible lizards’.

Therefore, you could say that Richard Owen discovered dinosaurs in 1841.

However, dinosaurs were being discovered a long time before that.

Dinosaurs lived on Earth for far longer than they’ve been extinct. During that time, they left plenty of evidence of their existence.

However, it took us a while to understand what the evidence meant.

Dinosaur fossils were being discovered for thousands of years before we actually knew what they were.

The discovery of dinosaur bones may even have given rise to myths and legends featuring creatures such as dragons, giants, and other monsters.

The ancient Greeks and Romans told stories of dragons, and depicted monsters in their art.

Chang Qu, an early Chinese historian, documented around 1,700 years ago that ‘Dragon bones’ were being found in the Sichuan Province of China.

It is likely that these ancient myths and legends were based on dinosaur fossils that had been discovered by these ancient peoples.

Putting The Pieces Together: The First Dinosaur Fossils

It was the discoveries made by scientists in seventeenth century England that really shaped our understanding of what dinosaurs actually are.

Robert Plot was an English naturalist who taught Chemistry at Oxford University. In 1674 he began a study of the natural history of Oxfordshire. His findings, published in 1676, included the first illustrated dinosaur bone.

Remember, at this time we had no idea that the world had once been populated by giant reptiles!

Although the fossil is now lost, the descriptions made of it were so detailed that it has since been identified as (probably) being part of a Megalosaurus.

In 1699, naturalist Edward Lhuyd described a tooth now known to have belonged to a sauropod dinosaur, giving it the name Rutellum implicatum.

When Were Dinosaurs Discovered: The First Known Dinosaur

As we’ve found, dinosaur fossils were being unearthed for thousands of years before we knew what they were.

It was only in the early 19th Century that scientists realized that these huge bones came from reptiles.

In 1824 the geologist Rev William Buckland announced the discovery of a new animal – the Megalosaurus – to the Geological Society of London.

As we saw in the introduction to this article, it was the first dinosaur to be officially described and named.

The second dinosaur to be officially recognized was named in 1825 by another English geologist, Gideon Mantell.

Mantell realised that some of the fossilised remains he had studied (including some teeth found by his wife) were reptilian, and that they resembled an iguana.

Mantell realized that some of the fossilised remains he had studied (including some teeth found by his wife) were from a giant reptile that shared certain characteristics with an iguana.

He named the new animal Iguanodon.

The Invention of Dinosaurs

Scientists believed that the giant reptiles being discovered and identified were extinct species of crocodile and lizard. They didn’t realize that the animals were all related and part of a new group of animals.

The man who put all of the pieces together was palaeontologist Richard Owen.

In 1841, Owen gave a speech to the British Association for the Advancement of Science in Plymouth, Devon. In this speech, Owen announced that the Megalosaurus, Iguanodon and Hylaeosaurus (another large reptile identified by Mantell) were members of a large group of ancient reptiles.

In 1842, when referring to his discovery, Owen gave the group a name: ‘Dinosauria’, from the Greek ‘deinos’, meaning ‘terrible’, and ‘sauros’ meaning lizard.

Therefore, if anyone asks you ‘when were dinosaurs discovered?’ then you could say 1841, because it was then that Owen discovered that there had been a large group of reptiles that once walked the earth but were now extinct.

When Were Dinosaurs Discovered? 1842

Although the remains of dinosaurs had been discovered throughout human history, it was Owen who realised they were all from one group, and it was he who gave that group a name: ‘Dinosaurs’, meaning ‘terrible lizards’.

The First Dinosaur Discovered In America

The first dinosaur discovered in America was the Hadrosaurus. It was found in 1858 by William Parker Foulke, a prison reformer, lawyer and geologist.

Foulke discovered the Hadrosaurus in New Jersey, USA. He reported his find to contacted paleontologist Joseph Leidy, who realised that it was a similar animal to the Iguanodon.

When Were Dinosaurs Discovered: Conclusion

Since the first dinosaurs were discovered and identified in England, we have learned much more about them. Dinosaur fossils have now been discovered in every continent. Different families and species of dinosaur have been identified. The evolution of dinosaurs has been studied, and we’ve even discovered that a branch of dinosaurs developed feathers and became birds.

It was the discoveries made by scientists such as Plot, Buckland, Mantell and Owen that allowed us to better understand the Mesozoic Era, and the animals that lived during that time.