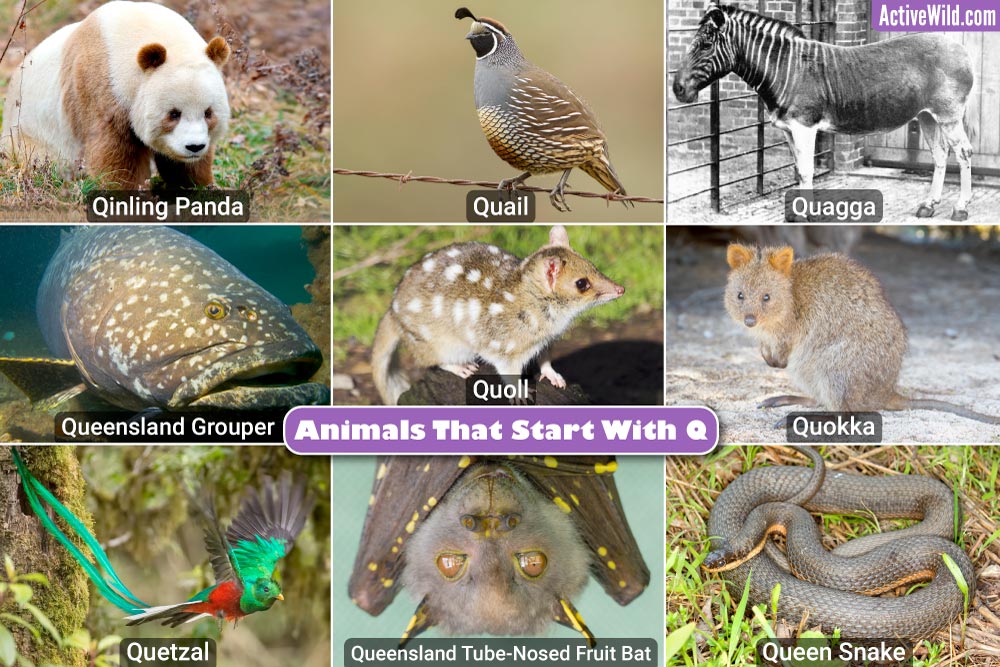 On this page is a list including these and many other interesting animals beginning with Q, together with pictures and facts on each species. 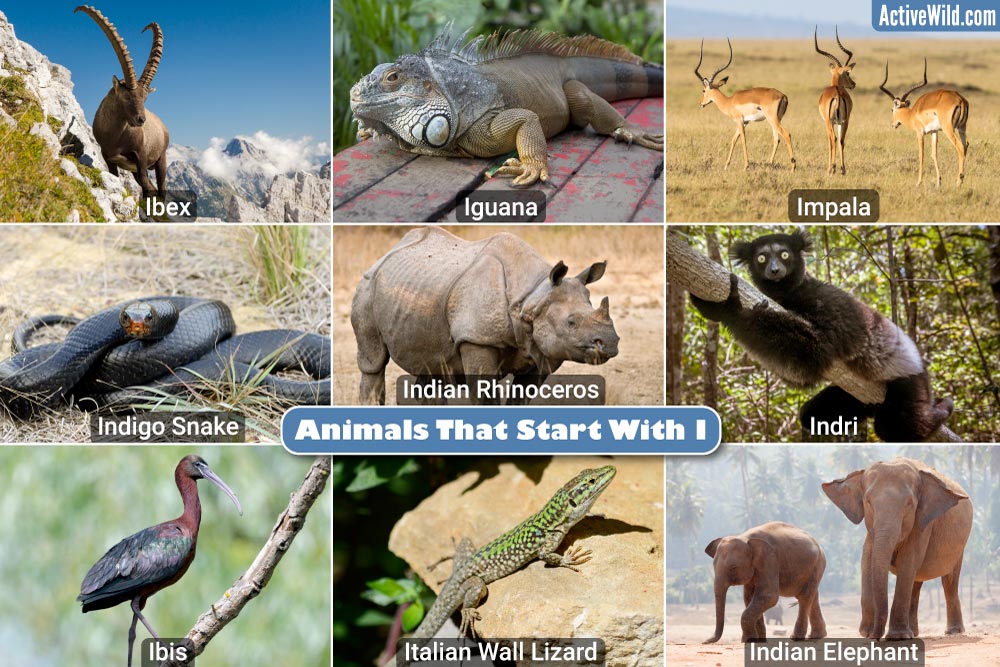 Animals that start with I include mammals such as the indri, impala, Indian elephant and ibex; birds such as the Iceland gull and icterine warbler; reptiles such as the iguana, Italian wall lizard, inland taipan and indigo snakes; and invertebrates such as the Irukandji Jellyfish and immortal jellyfish.

On this page is a list including these and many other interesting animals beginning with I, together with pictures and facts on each species. 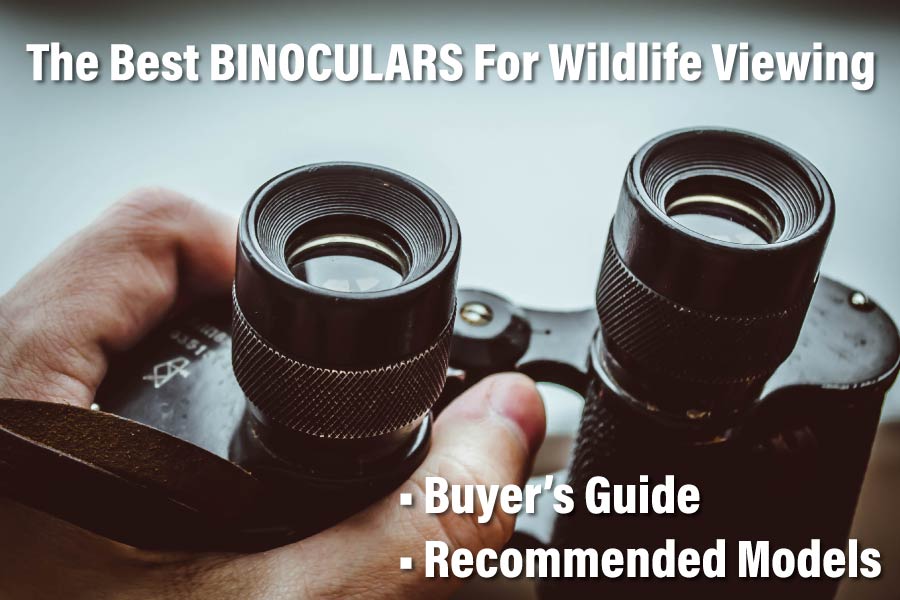 A guide to choosing the best binoculars for wildlife viewing. 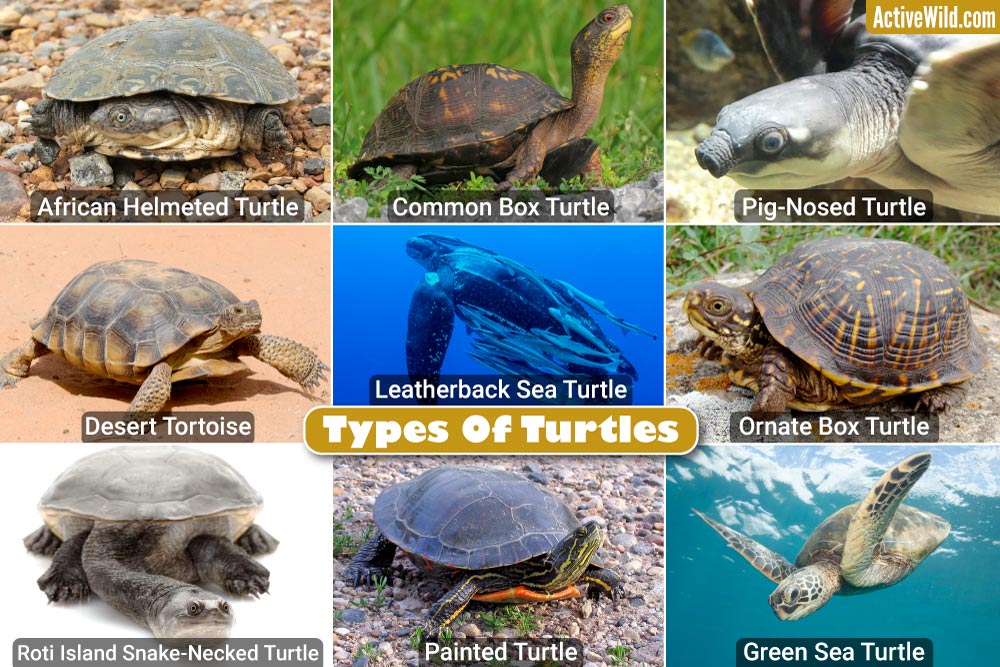 Turtles are reptiles belonging to the order Testudines, which is one of four reptilian orders, the others being crocodilians, squamates (lizards and snakes) and rhynchocephalians (tuatara).

On this page we take a look at 30 notable types of turtles, from the land-dwelling desert tortoise Gopherus agassizii, to the mighty leatherback sea turtle Dermochelys coriacea, the world’s largest living turtle. 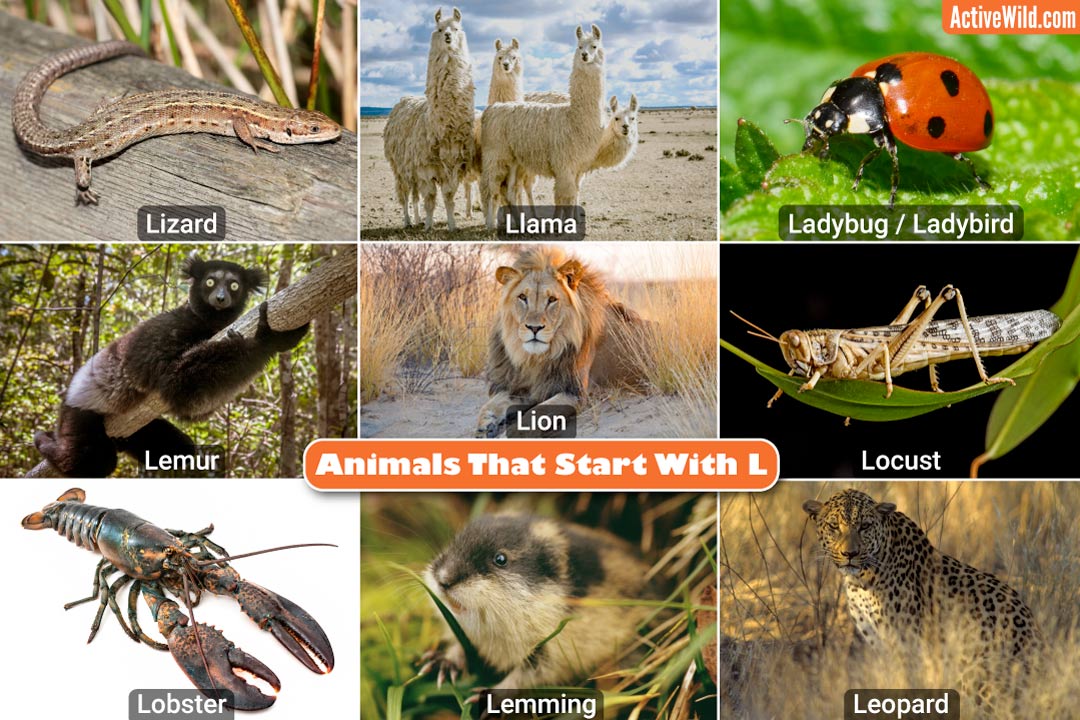 Animals that start with L include insects such as lacewings, leafcutter ants and locusts; mammals such as leopards, lions, lemurs and lemmings; reptiles such as the leatherback and loggerhead sea turtles; and birds such as the lammergeier and lapwing.

On this page is a list including these and many other animals beginning with L, with pictures and interesting facts on each species. 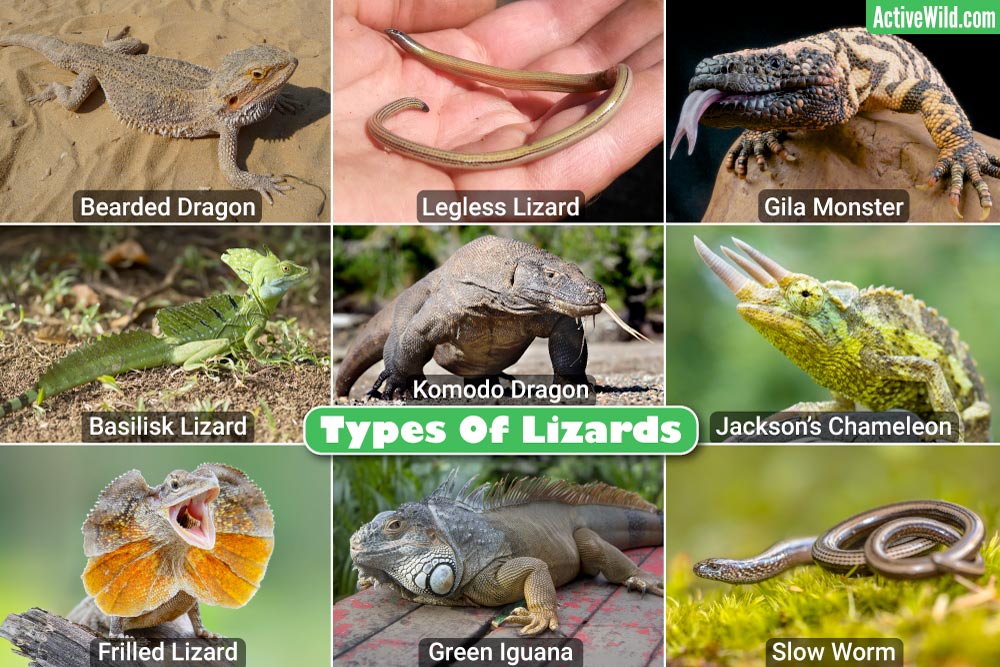 Well-known types of lizards include the Komodo dragon (the world’s largest lizard); Gila monster (a venomous desert lizard); green iguana (a large, tree-dwelling lizard); frilled lizard (which raises a brightly-colored ruff when threatened); Texas horned lizard (able to squirt blood from its eyes); legless lizards that resemble snakes; and flying lizards that glide from tree to tree in rainforests.

On this page is a list containing these and many more types of lizards. You’ll gain a comprehensive overview of lizard diversity and discover interesting facts on the lifestyles of these amazing reptiles. For each species, we have included pictures, fun facts, conservation status and links to further information. 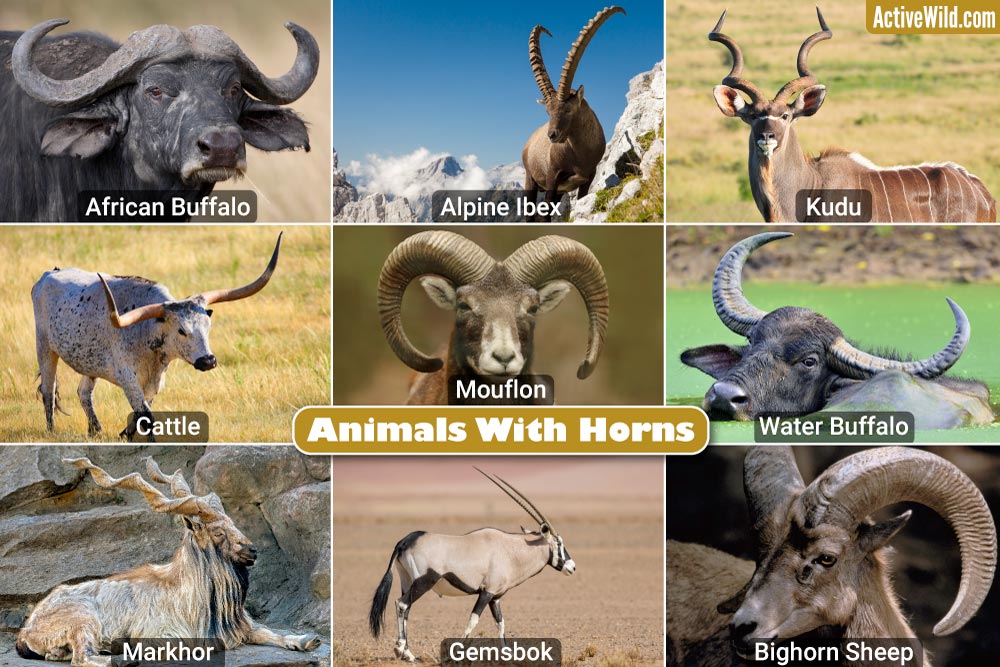 Animals with horns include the American and European bison, Asian water buffalo, African buffalo; antelopes such as the springbok, blackbuck, saiga, impala, gazelles, dik-diks, oryxes and wildebeest; the yak, gaur, ibexes, muskox and domestic cattle, sheep and goats. All animals with true horns belong to the family Bovidae.

Animals with features that resemble horns, but which aren’t “true” horns, include other hooved animals such as rhinos and giraffes, and species from unrelated groups, such as horned lizards, chameleons and horned vipers.

On this page you’ll find information on animal horns, followed by a list of animals with horns – which includes pictures of some of the most amazing horns in the entire animal kingdom! 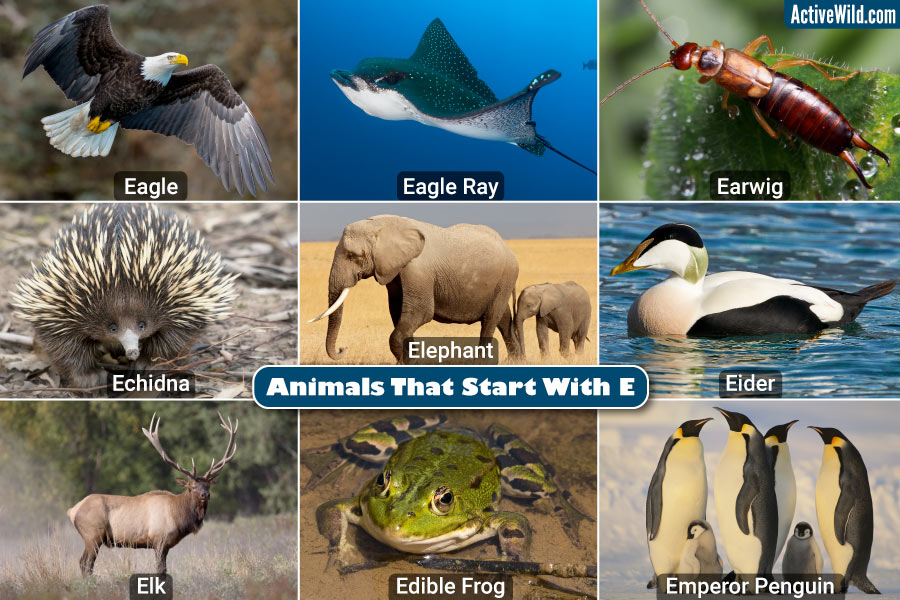 Animals that start with E include mammals such as elephants, elands, echidnas and the elk; birds such as eagles, eiders, the emu and emperor penguin; insects such as earwigs; reptiles such as the eastern coral snake; and fish such as eels and eagle rays.

On this page is a list including these and many other interesting animals beginning with E, together with pictures and facts on each species. 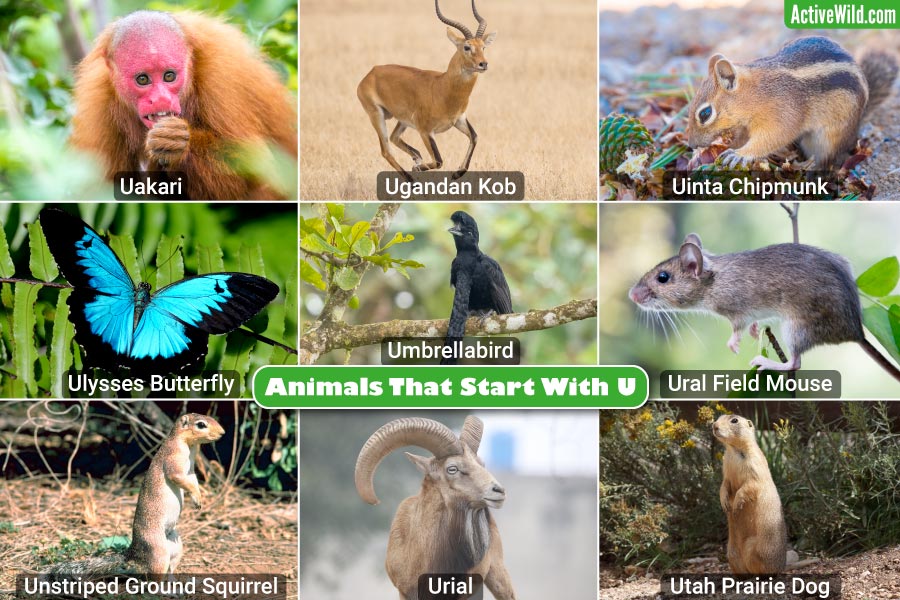 Animals that start with U include mammals such as uakaris, Uinta chipmunk, Utah prairie dog and unadorned rock wallaby; birds such as umbrellabirds and Uluguru violet-backed sunbird; insects such as the Ulysses butterfly; and fish such as the unicorn crestfish.

On this page is a list including these and many other interesting animals beginning with U, together with pictures and facts on each species. 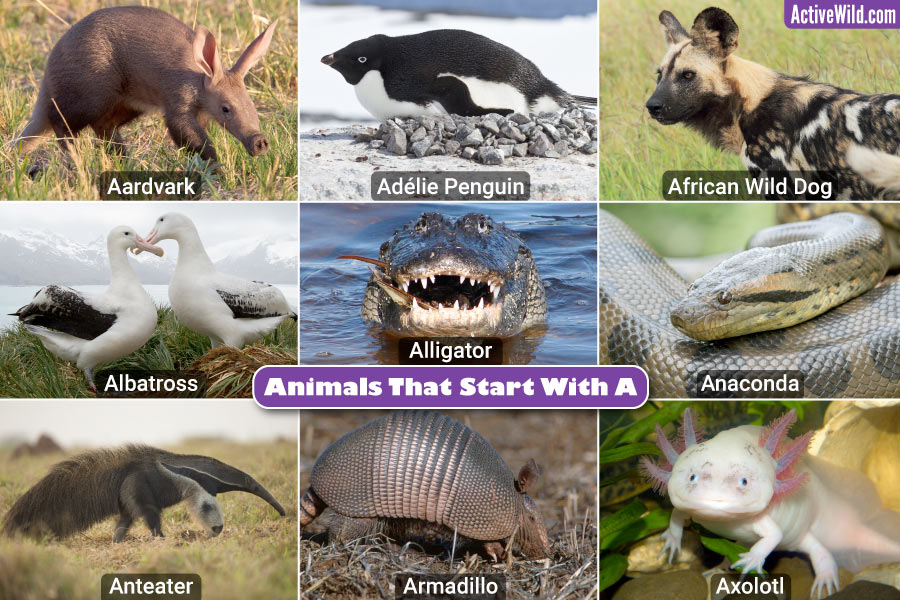 Animals that start with A include mammals such as the aardvark, African bush elephant, Arctic fox and aye-aye; reptiles such as alligators, anacondas and the alligator snapping turtle; amphibians such as the African clawed toad and axolotl; and birds such as albatrosses and auks.

On this page you’ll meet these and many other interesting animals beginning with A, together with pictures and facts on each species. 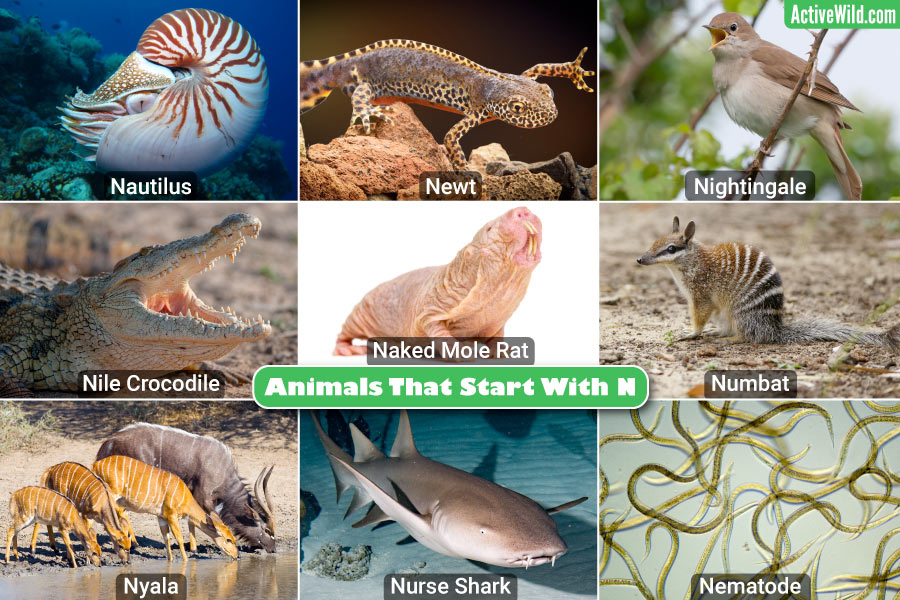 Animals that start with N include mammals such as the naked mole rat, narwhal and numbat; reptiles such as the Nile crocodile and northern leaf-tailed gecko; birds such as nighthawks and the nightingale; fish such as the nurse shark and nalolo; and amphibians such as newts and the natterjack toad.