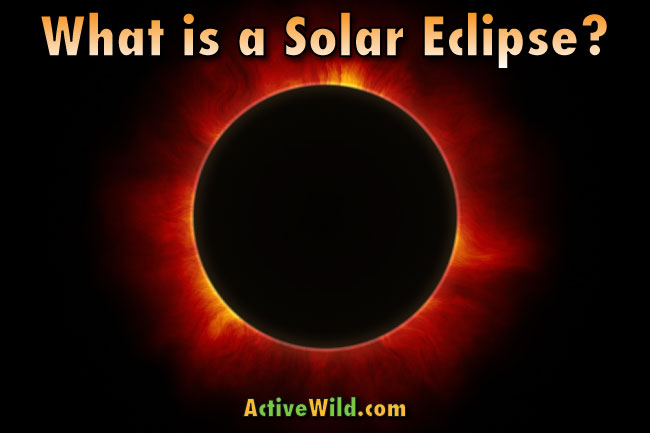 What Is A Solar Eclipse: Quick Page Links

You can read the whole page to become a solar eclipse expert, or use the quick links below to find the facts you need.

What Is A Solar Eclipse? Definition

A solar eclipse (in particular a total solar eclipse) is one of the most amazing natural spectacles. What could be more impressive than seeing the moon slowly cover the sun, causing the sky to darken into a strange, short-lived night?

In a partial solar eclipse, the sun is only partially covered by the moon.

An observer will see the dark disk of the moon slowly pass in front of the sun. The sun will remain partially visible as a crescent shape in the sky.

During a total solar eclipse the sun is completely covered by the moon.

Observers will first see a partial eclipse as the moon begins to pass in front of the sun. The moon will then proceed to completely cover the sun, at which point the total eclipse begins.

The period during which the sun is completely obscured by the moon is known as ‘totality’. Totality usually only lasts for a few minutes. The maximum possible length of totality is a fraction over 7.5 minutes.

During totality the moon prevents sunlight from reaching Earth. The skies darken, and day appears to turn into night.

After this brief period of darkness the sun is revealed again as the moon continues on its journey, causing another period of partial eclipse. The eclipse ends when the moon is completely out of the way of the sun.

Only observers within the moon’s shadow will experience the eclipse. For everyone else the sun will appear as normal.

The corona is the outermost layer of the sun’s atmosphere. It is usually hidden by the light of the sun, but during an eclipse it appears as a glowing halo around the sun.

At the very beginning or end of a total solar eclipse, when the sun is almost completely hidden by the moon, an observer might see beads of light on the side of the moon.

These are known as ‘Baily’s beads’, and are caused by sunlight shining between mountains or other features on the moon’s surface.

When just a single, large bead of light is visible, the effect is known as a ‘Diamond ring’.

How does the moon cover the whole of the sun in a total eclipse?

You may be wondering how the relatively tiny moon manages to completely cover the much larger sun. The answer lies, of course, in their relative distances from Earth.

Although the moon is 400 times smaller than the sun, it is 390 times closer to Earth.

In the same way that you can seemingly cover a distant mountain with your thumb, the much smaller moon appears to completely cover the sun. (In other words, the apparent size of the two bodies is the same.)

If you want your mind blown, watch this amazing video in which a group of friends build a scale model of the solar system …

In a solar eclipse, the moon makes two types of shadow: an umbra and a penumbra.

The darkest part of the shadow cast by an astronomical body (i.e. a moon, planet, comet, etc.) onto another is known as the umbra. In a solar eclipse, the umbra is the shadow that appears on Earth when the moon is completely covering the sun.

In a partial eclipse, the sun is only partially covered. Some sunlight will be prevented from reaching Earth, but not all. This creates an area an area of half-shadow on Earth known as a penumbra.

The amount of the sun being covered is known as the ‘magnitude’ of the eclipse (the more of the sun is being covered, the larger the eclipse’s magnitude). Magnitude decreases the further you are from the path of totality (see below).

During the course of an entire eclipse, only viewers situated within the narrow path of totality (see below) will experience a total solar eclipse. The total area covered by the penumbra during an eclipse can take in an entire continent.

What Is A Solar Eclipse: Path Of Totality

Only those observing from within the path of totality will witness a total solar eclipse.

An annular eclipse occurs when the moon’s apparent size isn’t big enough to completely cover the sun, and the sun can still be seen behind the moon. In an annular eclipse, the sun looks like a ring around the dark circle of the moon, hence the name (annular means ‘ring-shaped’).

Annular eclipses can last for over 12 minutes.

You may be wondering why the moon is sometimes big enough to cover the sun, but at other times it’s too small. Let’s find out …

The moon doesn’t orbit Earth in a perfect circle. In fact, the path that it takes looks like a circle that has been stretched. This shape is called an ellipse, and the moon’s orbit is said to be ‘elliptical’.

Therefore, the moon is not always the same distance from Earth. Sometimes the moon can be too far away from Earth to completely obscure the Sun. This causes an annular solar eclipse.

The Earth’s orbit around the sun is also elliptical rather than circular, and the distance between Earth and the sun is therefore not always the same. Sometimes the sun is too close to be completely obscured by the moon.

The moon is very gradually moving further away from Earth. In the distant future, all solar eclipses will be annular, because the moon will be too far away to obscure the entire sun.

A fourth type of solar eclipse, known as a hybrid eclipse, occurs when a total eclipse turns into an annular eclipse (or vice versa) in the same eclipse.

A hybrid eclipse is the least frequent type of eclipse to occur.

How long does a solar eclipse last?

Totality typically lasts for no more than a few minutes. If you’re watching a solar eclipse, the duration of totality is the time it takes for the moon’s umbra to pass over your position.

Mathematically, the maximum possible duration of totality is 7 min 32s. You’ll have to wait a long time for an eclipse to last anywhere near that long; from now to the year 8000, the longest-lasting total eclipse will be 7m 29s. It will occur in 2186.

The duration of an eclipse at any point on Earth is determined both by the size of the moon’s shadow at that point, and how fast the shadow is moving at that point.

(Remember, the orbits of both Earth round the sun, and the moon round Earth, are elliptical. Therefore, the distances between all three objects are continually changing.)

Why can’t everyone on Earth see a solar eclipse?

The sun is very much bigger than the moon. Although the moon is much closer, it’s only just big enough to cover the sun. The moon will only appear to be covering the sun from a relatively small viewing area on Earth. (As we saw above, this area is typically 100–160 km (62 to 99 mi) wide.)

If you move outside of the line of totality during a total eclipse then you’ll be able to see the sun poking out from behind the moon. (You’ll now be watching a partial eclipse.)

The further you move away from the path of totality, the less of the sun will be covered, until eventually you’ll have moved outside of the eclipse altogether. (That might require a walk of over 2,000 miles, so be sure to wear some good boots.)

What Is A Solar Eclipse: Syzygy

A solar eclipse occurs when the sun, the moon and the Earth are aligned in a straight line, in that order. This can only occur during a new moon; that is, when the moon lies between the Sun and Earth.

(Normally a new moon can’t be seen, as it’s between the viewer on Earth and the sun.)

When three celestial bodies are aligned in a straight line they are said to be in ‘syzygy’. It’s a great word that might one day win you a game of Scrabble.

How often do solar eclipses occur?

There are usually 2 solar eclipses every year, but there can be a maximum of five – although this is an extremely rare occurrence.

Although it takes the moon just 27.3 days to orbit the Earth, there isn’t a solar eclipse every new moon. This is because the moon orbits Earth at a slight angle, which means that its shadow would usually be too far either above or below Earth.

Why are solar eclipses so rare?

During a solar eclipse, the moon’s umbra (shadow) only covers a tiny proportion (less than half a percent) of the Earth’s surface. Because around 70% of Earth is covered by water, it’s rare to see a total eclipse on land.

This is why a total eclipse is such a big deal: it’s not often one can be seen from an inhabited part of the world!

What’s the difference between a solar eclipse and a lunar eclipse?

As we’ve found out above, a solar eclipse occurs when the moon comes between the sun and Earth, and the three bodies are aligned (in syzygy). The resultant eclipse is caused by the moon’s shadow being projected onto the surface of the Earth.

In a lunar eclipse Earth prevents the sun’s light from directly reaching the moon, and the moon is covered by the Earth’s shadow. The moon is only visible due to light that has been refracted (i.e. its direction has been changed) by the Earth’s atmosphere.

You can read about a lunar eclipse that occurred in England in 2015 here.

What Is A Solar Eclipse: Conclusion

On Monday, August 21, 2017, a total solar eclipse will be visible in many parts of the United States. You can see a complete guided to viewing this eclipse here: Total Solar Eclipse 2017 Viewing Guide