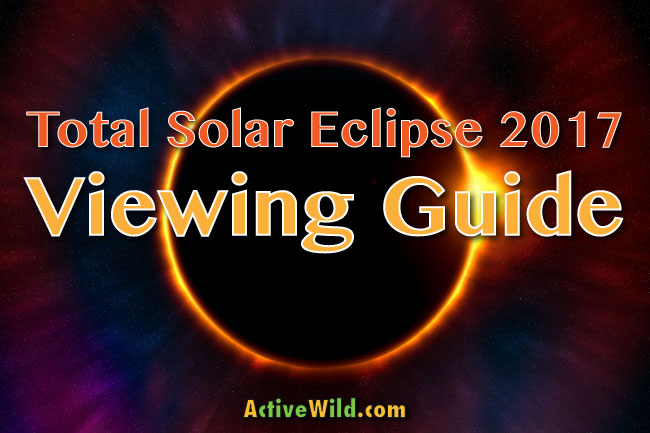 Total solar eclipse 2017 viewing guide: information on how and where to watch the 2017 eclipse.

On Monday, August 21, 2017, a huge shadow, cast by the moon, will sweep across the United States from west to east. Everyone in its path will be able to witness to one of nature’s most amazing spectacles: a total solar eclipse.

A total solar eclipse occurs when the sun is completely hidden behind the moon. As the moon passes in front of the Sun, sunlight is prevented from reaching the Earth, turning day into a mysterious, short-lived night.

A total solar eclipse is a rare enough occurrence in itself (the last one experienced by the United States was in 1979), but for it only to be visible in the United States – and for it to cross the entire country – makes this one a bit special. For this reason the 2017 solar eclipse has become known as the ‘Great American Eclipse’.

You’ll also need to know how to safely watch the eclipse without damaging your eyes.

Where To See The Solar Eclipse 2017

Whereas everyone in North America (and some of northwestern Europe) will be able to see a partial solar eclipse on Monday, August 21, 2017, the total solar eclipse will only be visible along a relatively narrow band that stretches from west to east across the United States.

If you want to see the total eclipse in all its glory, then you need to get yourself somewhere inside this band, which is known as the path of totality. This is the path that the moon’s shadow will take as it passes over America.

The map below (provided by NASA) shows the path of totality. You can use it to find a suitable location from which to view the solar eclipse. There’s also a link to an amazing interactive map further down the page.

If you’re inside the path of totality then you’ll be able to witness a total solar eclipse.

The path of totality is around 70 miles (110 km) wide. It passes through 14 states, from Oregon in the west to South Carolina in the east.

The closer you are to the center of the path of totality itself, the longer the total eclipse will last.

Tip: if you’re serious about watching the eclipse, keep an eye on the weather forecast and have alternative viewing locations planned!

12 million people live within the path of totality. Even if you’re not one of the lucky ones who live in the path, it’s no more than one or two days’ drive from anywhere in the United States. Why not plan a mini-vacation around it?

The video below shows the path that the moon’s shadow will take across America.

If you’re in North America on the day of the eclipse, but not within the path of totality, then you’ll only be able to see a partial solar eclipse. The further you are away from the path, the less impressive the eclipse will be.

During a partial solar eclipse, the moon passes in front of the moon but doesn’t cover it entirely, leaving a crescent-shaped slice of light. You should only attempt to view the phenomenon using suitable eyewear / apparatus.

Start making your plans: it will only take around 90 minutes for the moon’s shadow to pass across the entire country, from west to east. In addition, the maximum duration of the total eclipse at any point is only 2 minutes 40 seconds.

The chart below (provided by NASA) shows the time and duration of the total eclipse in some of the larger population centers within the eclipse’s path.

You can also use NASA’s interactive map (see further down the page) to find out when the eclipse will occur at any point along the path of totality. 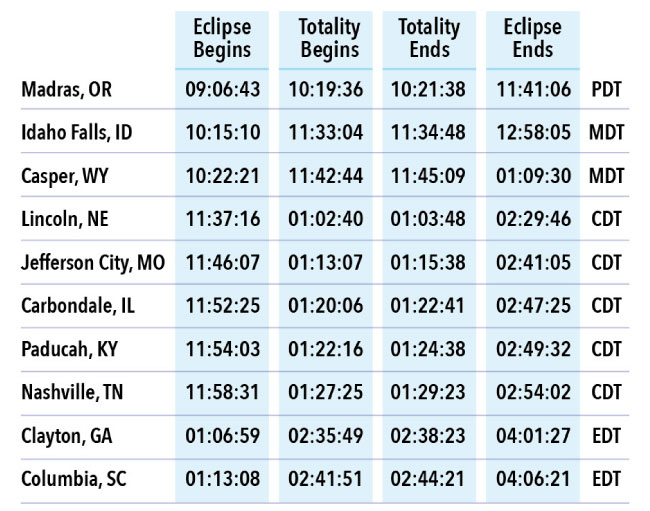 The duration of the eclipse will vary depending on where you watch it.

Remember, the closer you are to the center of the path of totality itself, the longer the eclipse will last.

NASA has created an awesome interactive map of the eclipse, which you can see here. Once you’ve worked out where you’re going to be watching the eclipse, come back and find out exactly what is happening when a solar eclipse occurs!

What Is A Solar Eclipse?

A solar eclipse occurs when the moon passes between the Sun and Earth, and in doing so either partially or totally covers the sun.

Either side of the relatively narrow path of totality is a much larger area in which the sun is only partially covered. The shadow caused by the partially-covered sun is known as the penumbra.

If you’re viewing a solar eclipse from outside of the path of totality but inside the penumbra, you’ll only see a partial solar eclipse.

The further away you are from the path of totality, the less of the sun is obscured by the moon.

How To Watch A Solar Eclipse

Looking at the sun with the naked eye – even during a partial eclipse – can cause irreparable damage to your vision. You’ll need specially-made eclipse glasses – or other equipment fitted with suitable solar filters – in order to watch the eclipse safely.

Don’t let that put you off viewing the eclipse; many eclipse viewing gadgets are cheap to buy and readily available.

Make sure that any equipment you use complies with the ISO 12312-2 international safety standard.

The only point at which it is safe to look at the eclipse without eye protection is during totality; i.e. when the sun is completely covered by the moon during a total solar eclipse. (Even then care must be taken to ensure that full totality has been reached and that the sun is completely obscured.)

It’s important to bear in mind that, depending on where you are viewing the eclipse, totality may only last for 2 minutes or less. Eye protection must be used to view the partial eclipse that occurs both before and after totality.

Totality will only be experienced if you are within the path of totality (see further up this page to find out what this is). If you are viewing the eclipse outside of this narrow band then you’ll need eye protection to safely view the partial solar eclipse.

Don’t be tempted to use sunglasses; they provide nowhere near enough protection for looking directly at the sun. Makeshift or homemade filters are also not to be used; they are extremely unlikely to provide the necessary protection.

Remember: it’s your responsibility to ensure that you and those in your care are watching the eclipse in safety. Additional safety instructions can be found at NASA.

A total solar eclipse is one of nature’s most awesome spectacles. The chance to view one doesn’t come around very often and we highly recommend that you make the effort to see it. After reading this page you’ve got no excuse not to!

Enjoy the Great American Eclipse of 2017!