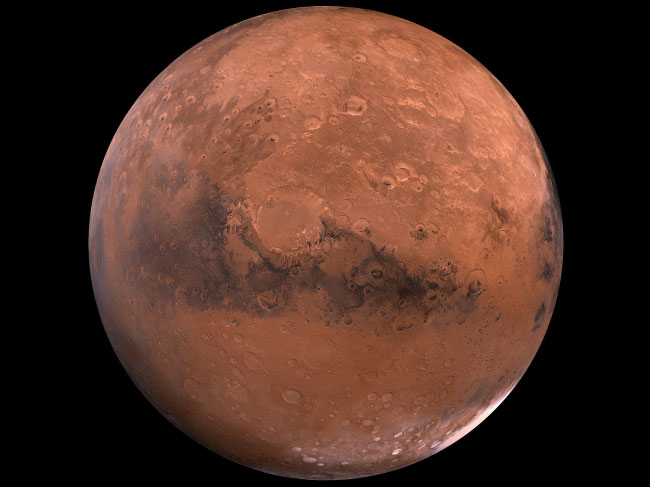 Nasa has recently found evidence of flowing water on Mars, which raises the likelihood that life may exist on the planet! We’ll investigate their findings further down the page.

This article contains Mars facts for kids (and adults!). Let’s find out more about the Red Planet …

Introduction: Mars In The Solar System

You can often see Mars in the night sky without a telescope or binoculars. It looks like a bright red star. Named after the Roman God of War, Mars is often called the ‘Red Planet’ due to its red colour.

The video below shows actual views of Mars taken by Nasa’s Curiosity Rover:

Mars is one of our ‘next-door neighbours’ in the solar system. Our other neighbour is Venus, the second planet from the sun, which is nearer to Earth than Mars.

The diagram below shows the order of the planets in the solar system and their relative sizes. Mars is planet 4, Earth is 3.

As you can see, Earth is bigger than Mars: around twice the size, in fact.

However, they’re both small compared to Uranus and Neptune, and tiny compared to Jupiter and Saturn!

Planets of the Solar System:

How To Remember The Order Of The Planets

Here are two useful mnemonics to remember the order of the planets (a mnemonic is a way of remembering something). The first one includes Pluto*, the second does not.

* Many scientists regard Pluto not as a planet, but as a ‘dwarf planet’. Since the discovery of Pluto, several more dwarf planets have been discovered, so the mnemonic should be even longer!

Would You Want To Live On Mars?

Mars is a cold, inhospitable place. Its surface is pitted with impact craters. If you could breathe there, you might have fun jumping around in the low gravity, but you’d be in danger of being blown away: huge dust storms with winds reaching speeds of over 100 km/h (62 mph) occasionally blow across the surface. The dust can take months to settle down again.

The low gravity might help as you made your way across the rocky, desert-like terrain but you wouldn’t survive the cold, at least not for most of the year.

Because Mars is further from the Sun than Earth, its atmosphere is colder. Although during the summer the temperature at the equator of Mars can rise to a habitable 30 °C (86 °F), most of the time it’s much lower. The average temperature on Mars is -63° C (-81°F).

The wide temperature range is caused in part by the thin atmosphere, which doesn’t retain much heat.

Mars distance from the Sun

When you’re talking about space, distances tend to be very, very big! The figures below are rough approximations, because the planets don’t orbit the sun in perfect circles.

The diameter of Mars is approximately half that of Earth’s. Mars is also a much less dense planet, and is only one-tenth of the Earth’s weight. This means that gravitational pull on the surface of Mars is significantly weaker than that on Earth.

Mars Years Are Longer; Mars Days Are Around The Same

Mars has seasons, just like Earth. However, seasons last about twice as long on Mars. Mars takes almost twice as long to go round the sun, so a Martian year is equal to almost two Earth years.

That means fewer birthdays in the same amount of time!

The atmosphere of Mars is mainly carbon dioxide, with small amounts of argon and nitrogen, and only traces of oxygen and water vapour.

You certainly wouldn’t be able to breathe on Mars!

Mars has a very thin atmosphere, which is also caused by the planet’s low density. Mars’ atmospheric pressure is less than one-hundredth of Earth’s.

Why Is Mars Red?

Mars is red because it is covered in a layer of iron-rich dust. The rusty red colour of the planet is caused by just that: iron oxide, also known as rust!

Dust in the atmosphere causes Mars to have red skies.

So despite the deadly atmosphere, the cold, and the dust storms, you still want to visit Mars? Here are some of the attractions:

Mars’s polar ice caps are made of frozen carbon dioxide, which turns to gas in the summer (when a substance turns directly from a solid to a gas it is said to ‘sublime’). When this happens, large geysers of carbon dioxide and dust erupt from the surface. Don’t forget your camera!

Be sure to visit Tharsis, the volcanic plateau in the planet’s western hemisphere. Here you will find three huge volcanoes, including Olympus Mons: the biggest volcano in the solar system. It’s almost as tall as three Mount Everests!

The reason such a huge mountain can exist is because of the low gravity on Mars. If the volcano was moved to Earth it would sink into the ground.

If you were hoping to see canals on Mars then you might end up disappointed. In the 19th century an Italian astronomer named Giovanni Schiaparelli found what he thought were long grooves on the surface of Mars. An American astronomer, Percival Lowell, was influenced by this discovery, and claimed that the grooves were canals, built by aliens to irrigate farmland. It was later found that the canals were optical illusions.

Mariner 4, launched in 1967, was the first spacecraft to successfully perform a flyby of Mars. Since then, several more spacecraft have reached Mars, and there are currently 7 operational spacecraft at the planet. Five of these are in orbit, and two are on the ground.

Click on the names of the craft to go to their official sites.

On the planet surface:

Is There Life On Mars?

Because Mars is close to Earth, and the most ‘Earth-like’ of the other planets in the solar system, man has always wondered if there could be life there.

The word ‘Martian’, which means ‘of, or relating to Mars’, has come to mean an alien invader, usually intent on the destruction of Earth!

The presence of water is used as an indicator of whether a planet could support life. There is evidence that there was once a large amount of water on Mars, which suggests that life may once have existed on the planet, even if it no longer does.

There have been a number of signs that water stills exists on Mars, and on 28th September 2015, Nasa announced that they had found evidence of liquid water on Mars. The presence of flowing water means that the planet is more likely to be able to support life.

Watch the video below to see highlights of the Nasa announcement:

If there is anything living on Mars, then it’s more likely to be microbes than little green men. However, Nasa’s discovery means that we are one step closer to finding out.