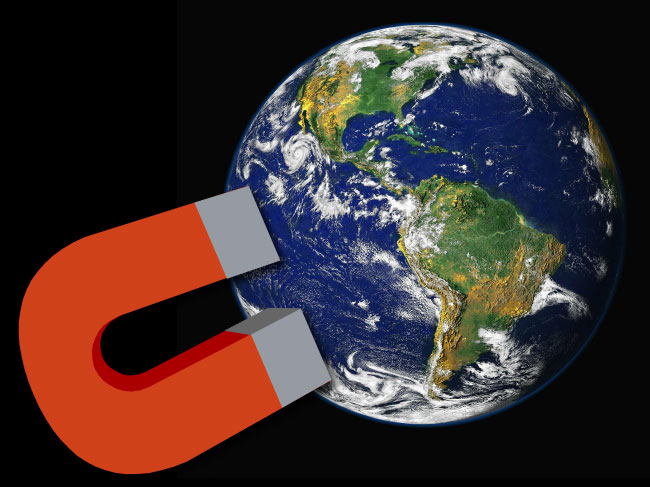 Magnetism is an invisible force that pulls certain substances towards a magnet. Not only is magnetism a fascinating natural phenomena, it also has many practical uses. Magnets are used in all kinds of inventions: from compasses to computers. This article explains magnetism for kids, and also lists the different types of magnet, and the various uses of magnets.

Did you know that the Earth is one big magnet? Read on to find out more …

Introduction To Magnetism For Kids

Magnetism is an invisible force that can attract (or repel) certain materials, such as iron and steel (we’ll learn more about magnetic materials further down the page). This force is called a ‘magnetic field’ and is created by magnets.

The useful introductory video below shows how a magnet attracts various objects.

What Is A Magnet?

Magnets are objects (made out of magnetic materials) that produce a magnetic field.

Magnets pull other objects made of magnetic materials towards them. They will either attract or repel other magnets.

Attracted? What Do You Mean?

If you put the north pole of one magnet near the south pole of another magnet you will be able to feel them pulling towards each other.

It’s like there’s an invisible bit of rope between them pulling them together.

It’s a very strange feeling. It’s as if there’s an invisible bit of rubber between the two magnets, preventing them from touching. If you can get hold of some magnets try it for yourself.

I Thought The North And South Poles Were Places, Not Parts Of A Magnet!

The two sides of a magnet are called north and south poles because if a magnet is able to spin freely, the north pole of the magnet will always end up pointing towards the Earth’s North Pole.

In fact, the magnet will point at the Earth’s Magnetic North Pole, which is near to – but not the same as – the Geographic North Pole.

That’s because the world is like one big magnet, with its own magnetic north and magnetic south poles. The Earth’s core is made of iron, which is what causes its magnetism and produces its magnetic field.

If you were at the Earth’s Magnetic North Pole, whichever way you turned, your compass would point south!

Ferromagnetic materials include iron, nickel, cobalt and (most of) their alloys (an alloy is a mixture of a metal and another element), such as steel.

Magnets that keep their magnetism are known as ‘permanent magnets’.

The magnet on a fridge magnet is a permanent magnet: it doesn’t lose its magnetic properties.

Two common types of permanent magnets are the bar magnet and the horseshoe magnet. Bar magnets are narrow rectangular in shape, and their north and south poles are at opposite ends of the bar.

Horseshoe magnets are like bar magnets that have been bent round into a thin ‘U’ shape. One of the tips is the north pole, the other the south pole.

All substances have a degree of magnetism, but those least affected by a magnetic field are known as ‘non-magnetic’ substances. These include plastics, copper, and gases.

Another type of magnet is an electromagnet.

Electromagnets work because an electric current produces a magnetic field.

Electromagnetism was discovered in 1820 by Hans Christian Ørsted, a Danish scientist. He noticed that a freely hanging compass needle moved when brought close to a wire carrying an electric current.

Unlike a permanent magnet, an electromagnet’s magnetism disappears when the current is turned off.

The first electromagnet was invented by British scientist William Sturgeon in 1824, who wrapped wire around a horseshoe-shaped iron bar.

Inside a piece of magnetic material, there are many tiny magnetic regions called domains. Each has a north and a south pole, just like any magnet. Before the material is made into a magnet, these domains are all pointing in different directions, cancelling each other out.

How To Make A Magnet

Any magnetic substance can be made into a magnet by having its domains aligned into north and south poles. To do this another magnet is stroked across the material. This eventually pulls the material’s molecules so that they are all facing in the same direction, giving the material a north and a south pole.

If the magnet was then beaten with a hammer it would lose its magnetism, because the domains would be shaken out of alignment.

A magnetic field is the magnetic effect of a magnet. It is invisible, but can be detected with a compass or another magnet.

If you could see the magnetic field of a magnet, it would look like a series of curved lines going between the north and south poles.

The video below shows this being done.

Magnets and electromagnets have many uses in the modern world. From the simplest fridge magnets, to advanced computer data storage systems, we rely on magnets and magnetism to perform a wide range of tasks.

One of the first uses of magnetism was to make compasses. Because the needle of a compass is a magnet, it will always spin round to align itself with the Earth’s magnetic field. Using a compass, an explorer will always know which way is north, and therefore the direction in which he is headed.

A computer’s hard drive is used to store data such as emails, pictures and movies. At the heart of a computer hard drive is a spinning disc with a magnetic surface. The data is stored on the disc in the form of magnetic patterns.

Speakers use magnetism to convert electrical sound information into sound waves. The electrical signal is passed through a coil that is attached to the speaker cone. The coil is hung between the poles of a permanent magnet. The coil becomes an electromagnet and is forced to move by the magnet, which in turn vibrates the speaker cone and produces sound.

We hope that you have enjoyed learning about magnetism. Why not try and find more uses of magnets by searching the internet – or just by looking around your house. There are magnets in televisions, telephones, doorbells, cars, and many, many other places too.