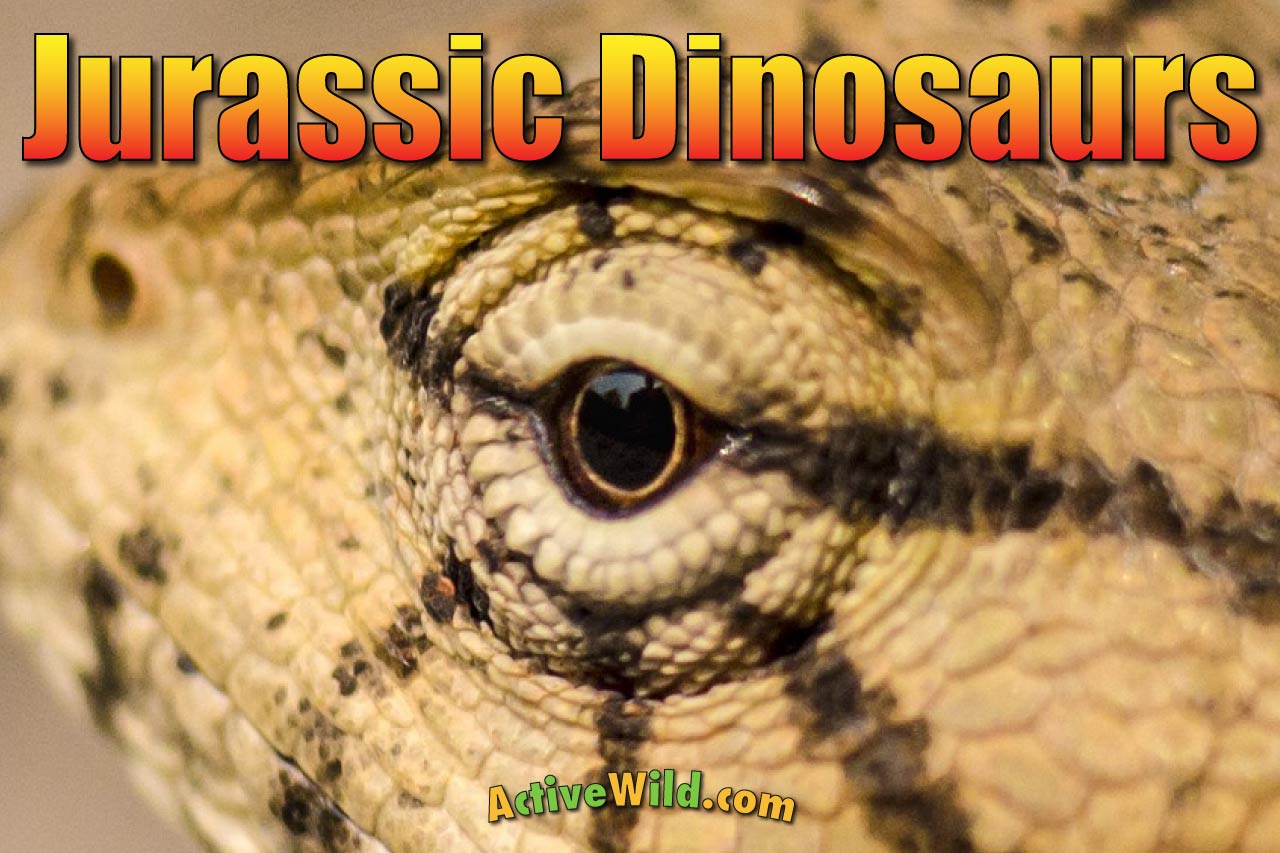 (Scroll down to see the dinos!)

The Jurassic Period is the second of the three periods of the Mesozoic Era.

At the end of the preceding Period – the Triassic Period – there had been a mass extinction of species. This was probably caused by widespread volcanic activity. During that tumultuous time, 50% of all species became extinct, including the dinosaurs’ main rivals, the crocodile-like pseudosuchians.

The dinosaurs seized their chance, quickly becoming the dominant land animals of the period. Let’s meet some Jurassic Dinosaurs…

Dinosaurs That Lived In The Jurassic Period 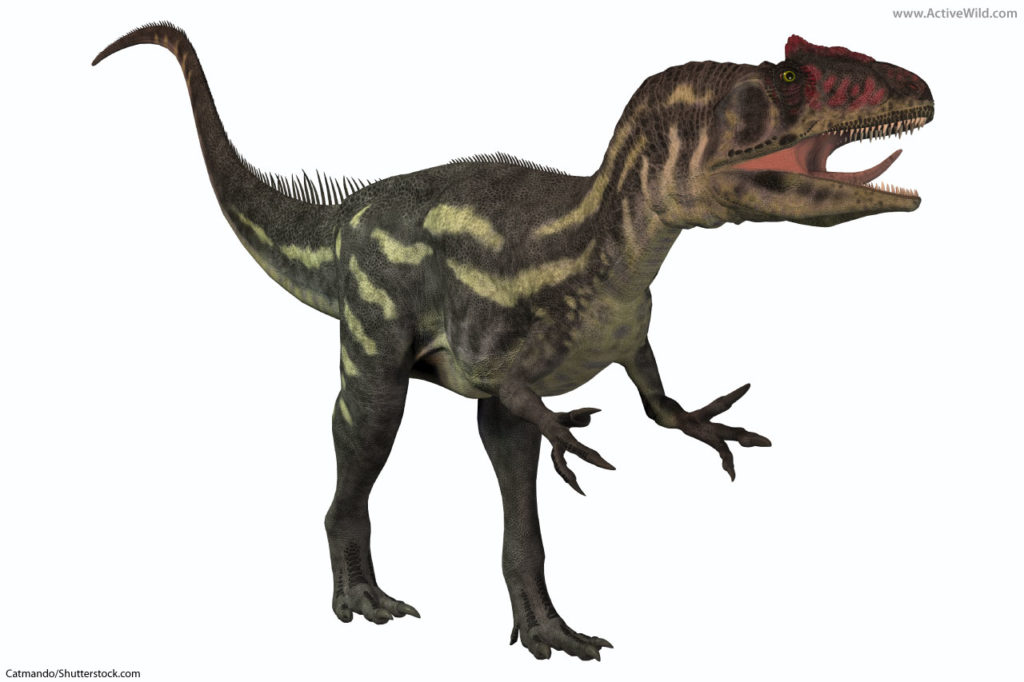 Allosaurus was one of many Jurassic dinosaurs discovered in the Morrison Formation (a layer of rocks formed in the Jurassic Period), located in the western United States. It was named by famous fossil collector Othniel Charles Marsh. Most allosaurus specimens have been found in the USA, but allosaurus fossils have also been discovered in Portugal.

Allosaurus was a large, bipedal theropod. It was an apex predator that would have preyed on sauropods and Stegosauria such as Stegosaurus. 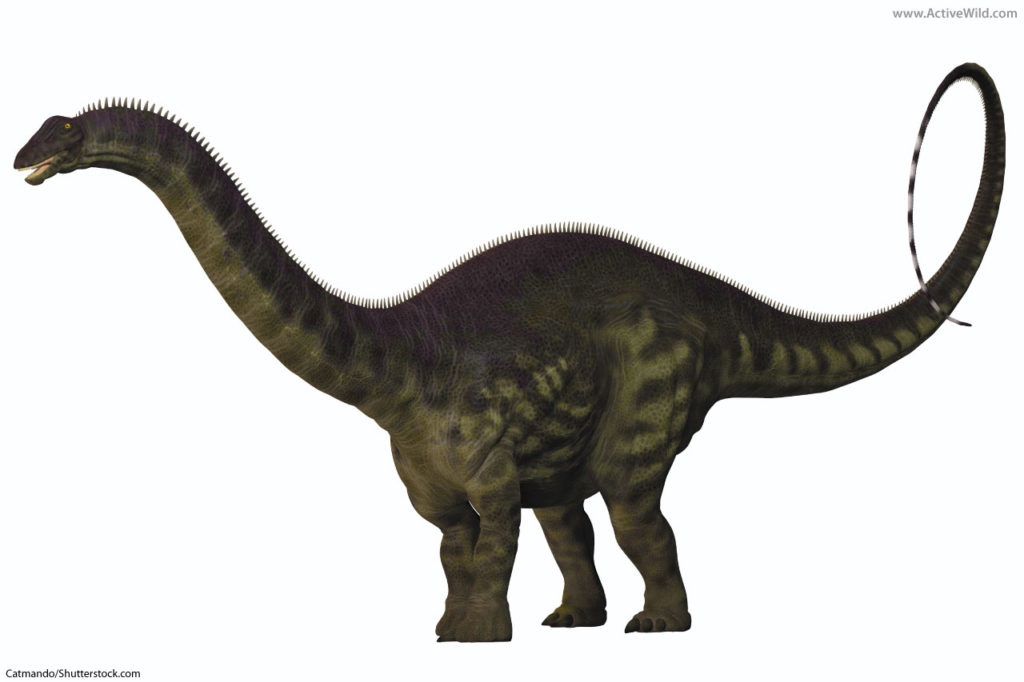 Apatosaurus is a large sauropod dinosaur that lived in North America in the Late Jurassic Period. Like Allosaurus, it was discovered in the Morrison Formation by Othniel Charles Marsh.

Marsh later discovered a similar dinosaur, which he named Brontosaurus (see further down the page). Early in the 20th century it was decided that the two dinosaurs were one and the same. Because Apatosaurus was found first, all Brontosaurus specimens were renamed as Apatosaurus.

However, research carried out in the 21st century now tells us that the dinosaurs are in fact different. Brontosaurus is therefore once again considered to be a separate type of dinosaur. 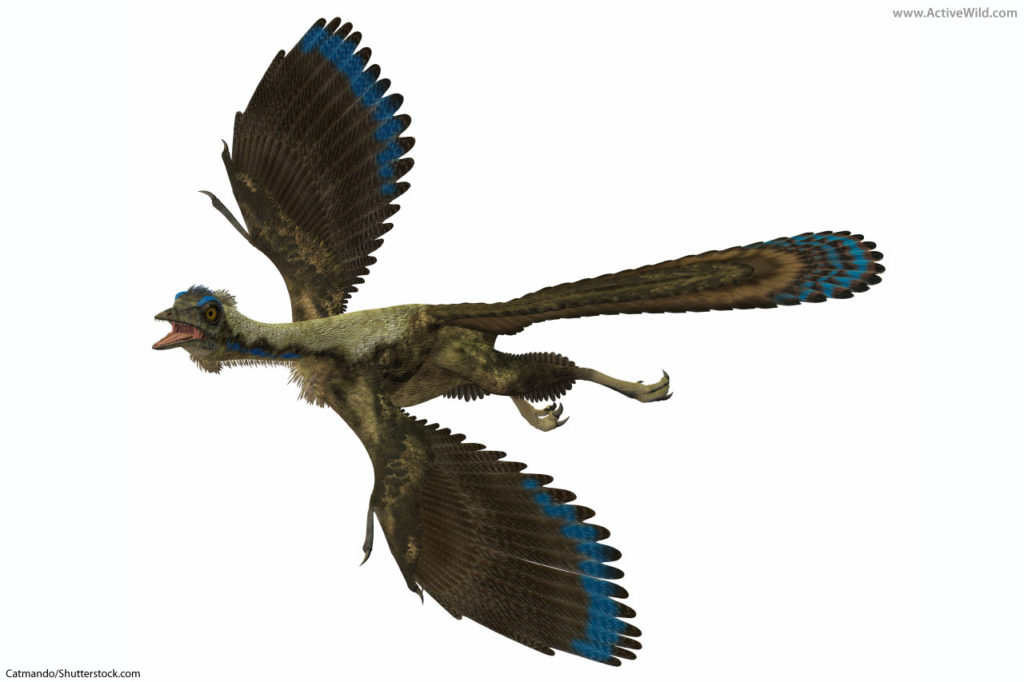 The near-perfect Archaeopteryx skeleton, found in 1861 in Germany, is one of the most famous of all dinosaur discoveries. Its existence provided scientists such as Charles Darwin and Thomas Henry Huxley with evidence not just for evolution, but also that birds evolved from dinosaurs. 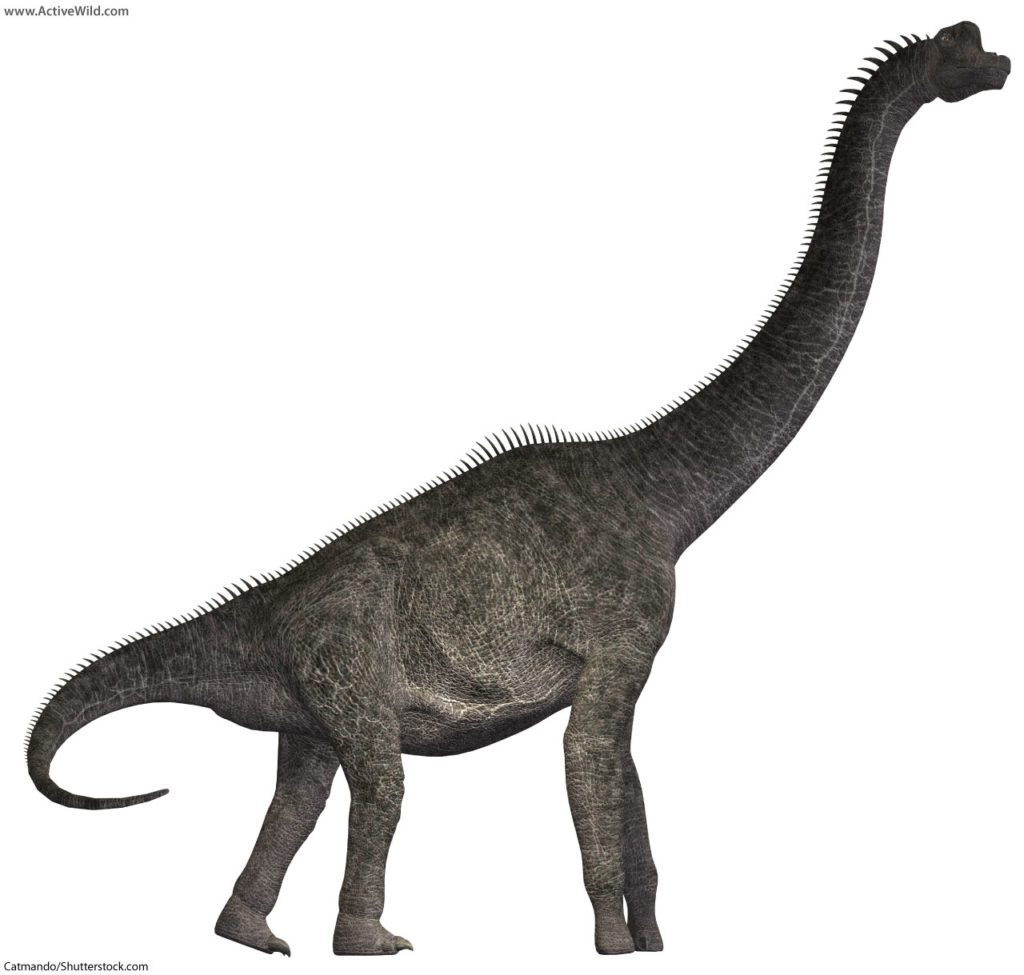 Brachiosaurus is a typical sauropod, with a long neck and tail, and an enormous body supported by four tree-trunk-like legs. The first Brachiosaurus specimen was discovered in 1900 in Colorado, USA, by American paleontologist Elmer S. Riggs.

At the time of its discovery it was believed to be one of the largest dinosaurs ever to have lived. Although larger dinosaurs have since been discovered, Brachiosaurus was still a true giant, reaching estimated lengths of 21m (69 ft.)

The name Brontosaurus means ‘thunder lizard’. It was named by US paleontologist Othniel Charles Marsh. This huge sauropod lived in North America in the Late Jurassic Period.

Scientists believe that brontosaurus (and other sauropods) may have been able to crack its huge tail like a whip. This may have served as a deterrent to predators.

Camarasaurus is the most commonly-found sauropod of the Late Jurassic in North America. Its name means ‘chambered lizard’, and refers to the hollowed-out bones that it (and other sauropods) possessed. These not only lightened the skeleton, but also contained air sacs that helped the enormous dinosaurs to breathe. 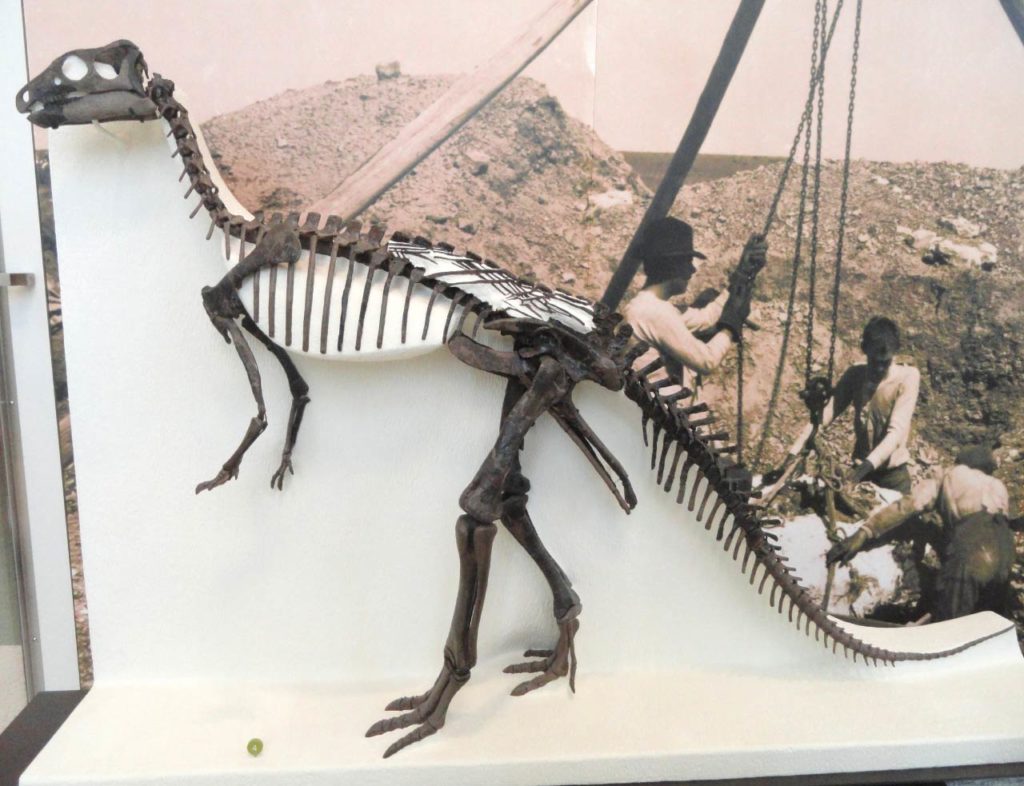 Ornithopods are a group of ornithischian dinosaurs whose members had sophisticated chewing mechanisms for eating plant matter.

Ceratosaurus is another of the many dinosaurs found in the Morrison Formation in the western United States. This predatory dinosaur had a horn on its nose and prominent ridges over its eyes.

Clusters of fossilized Ceratosaurus footprints suggest that it may have hunted in packs. It may have targeted prey such as stegosaurus and infant sauropods such as Apatosaurus and Brachiosaurus.

Compsognathus was a turkey-sized, meat-eating dinosaur. Remains of this fast-moving predator have been found preserved with their lizard prey still inside their bodies. For many years Compsognathus was the smallest-known dinosaur. (Smaller dinosaurs, such as microraptor, have since been found.)

Dilophosaurus was an early Jurassic theropod. This distinctive dinosaur had a pair of thin, bony crests on its head. (The dinosaur’s scientific name means ‘lizard with two crests’.) The crests, which narrow into sharp points at the rear, may have been used as a display by males.

Diplodocus was one of the more common large dinosaurs to be found in the Morrison Formation in western USA. The hind legs of Diplodocus were longer than the front legs and its body sloped downwards from the hips to the shoulders.

It is thought that Diplodocus was able to rear up on its hind legs, using its gigantic tail as a prop. This would have enabled the huge lizard to reach foliage that would otherwise have been out of reach.

Drinker was named after famed US paleontologist Edward Drinker Cope. It was discovered in the Morrison Formation in the USA, and described (i.e. officially named) in 1990. Drinker’s wide feet suggest that it may have lived in swampy habitats.

Huayangosaurus was an early stegosaurian that lived in what is now China during the Middle Jurassic. Like all stegosaurians, it is an ornithischian (bird-hipped), plant-eating dinosaur that walked on four legs.

Huayangosaurus is the smallest-known stegosaurian. It had two rows of spike-like plates running along its back, and a spiked tail.

Lesothosaurus was a small, slender dinosaur. Its light build and long legs suggest that it was a swift runner. One of the earliest ornithischians, Lesothosaurus would have eaten plants with a chopping motion, rather than with the chewing motion used by later ornithischians (who had developed cheeks that enabled them to do so). 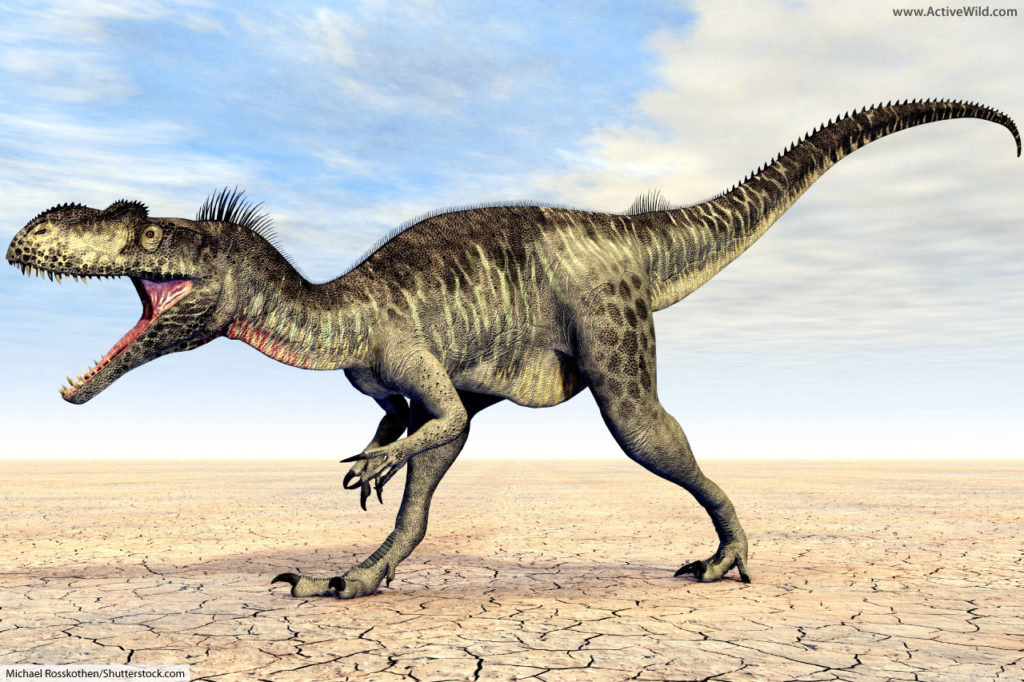 Megalosaurus was the first dinosaur to be named. It was one of the three species used by English paleontologist Richard Owen to present a ‘new’ type of animal to the world – the dinosaurs.

Megalosaurus walked on its hind legs, using its tail as a counterbalance. It was a predator, and its likely prey would have included sauropods and stegosaurians.

All that we know about Ozraptor comes from a single fossil. The fossil, part of a leg bone, was discovered by a group of schoolboys in 1966. At first it was thought to be from a prehistoric turtle. Only in the 1990’s was the specimen identified as being part of a dinosaur.

Ozraptor is one of the earliest-known Australian dinosaurs. 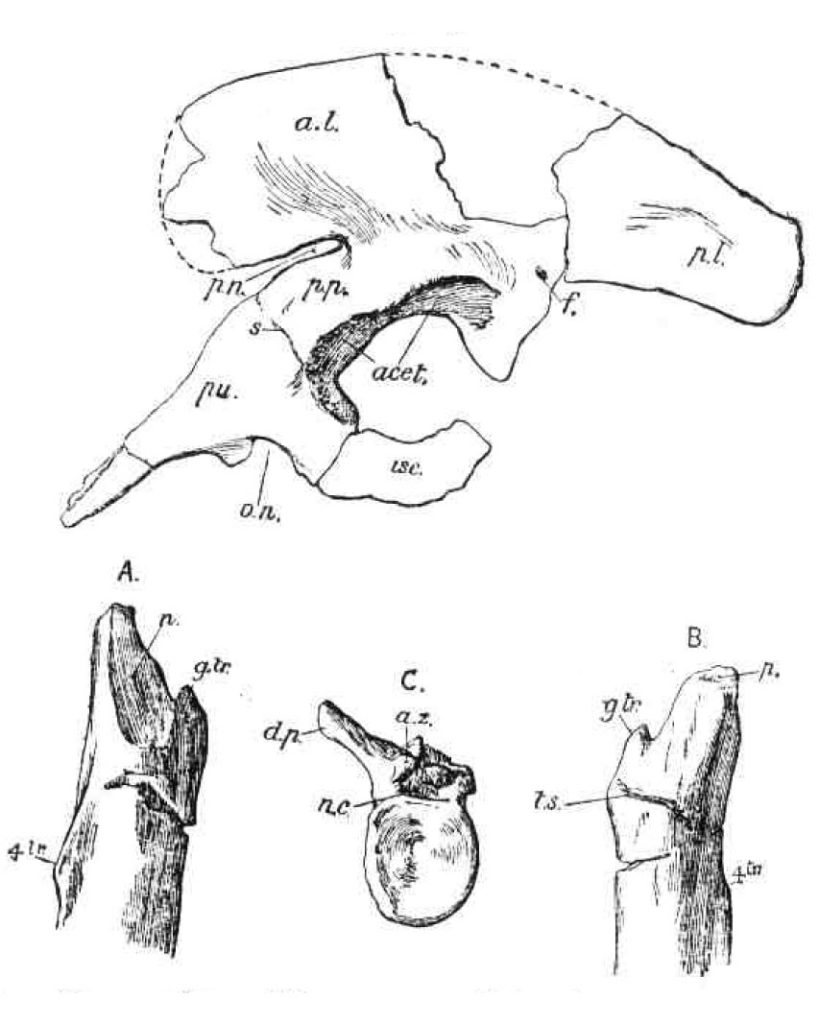 Sarcosaurus was a predatory dinosaur that lived in England during the Early Jurassic Period. Its name means ‘flesh lizard’. All that we know about this dinosaur comes from a pelvis, a vertebra and a partial femur. 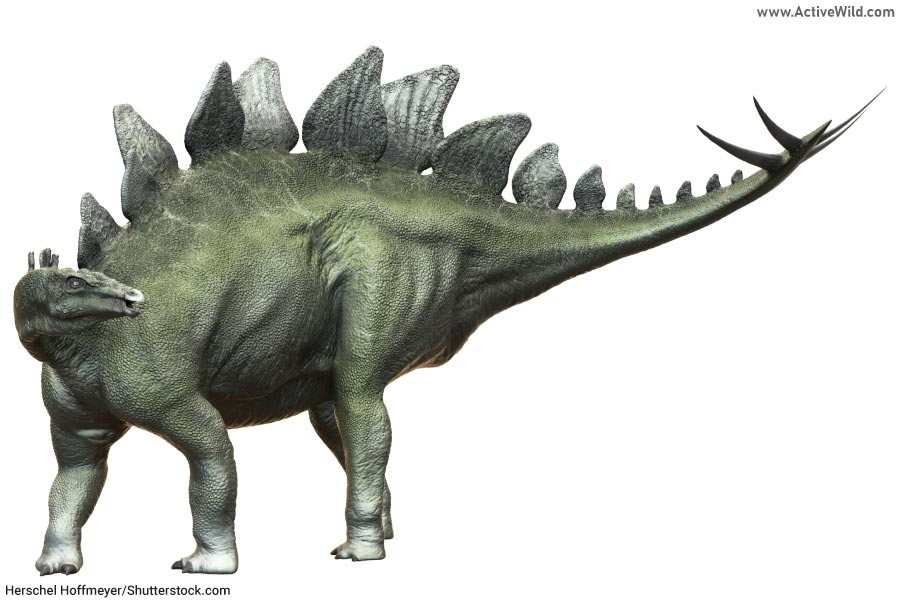 Stegosaurus is one of the best known Jurassic dinosaurs. It was a heavily-built plant-eater. Its forelegs were shorter than its hind legs, giving its body a downwards slant.

The most distinctive feature of the Stegosaurus is the two rows of large plates that run along its back. These may have used as a defense against predators, or as a means of controlling the animal’s body heat.

Tianchisaurus was an early Ankylosaurian dinosaur found in China. (The best-known Ankylosaurian is the Ankylosaurus, which lived in the Late Cretaceous Period.)

The first Tianchisaurus to be found was given the species name Jurassosaurus nedegoapeferima. The second part of the name is made of the first letters of the surnames of the stars of the Jurassic Park film (namely: Sam Neill, Laura Dern, Jeff Goldblum, Richard Attenborough, Bob Peck, Martin Ferrero, Ariana Richards, and Joseph Mazzello.)

The first part of the name has now been changed to Tianchisaurus, but the second part remains.

Vulcanodon was an early sauropod that inhabited southern Africa in the Early Jurassic Period. Its name means ‘Vulcan tooth’. This refers to the volcanic rock in which it was found, and the nine sharp teeth that were found with the specimen.

It was later found that the fossil was found in sandstone beneath the volcanic rock, and that the teeth in fact belonged to another dinosaur.

We hope that you have enjoyed finding out about some of the amazing dinosaurs that lived in the Jurassic Period.

You can discover more about dinosaurs and the Mesozoic Era on the following pages:

31 thoughts on “Jurassic Dinosaurs List: Discover The Dinosaurs That Lived In The Jurassic Period”