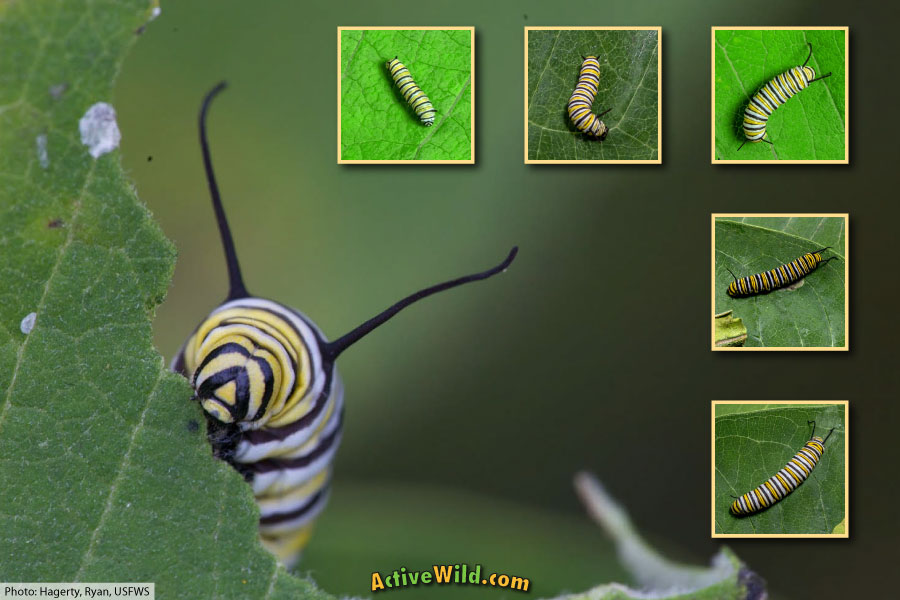 Find out about monarch caterpillar stages with pictures and facts.

What many people don’t know is that, as a caterpillar, the monarch also goes through several stages of development. On this page we’ll find out about the 5 monarch ‘instars’; the stages a monarch caterpillar goes through before pupation…

Most people know that the life cycle of the monarch butterfly has four distinct stages: egg, caterpillar, chrysalis and imago (the adult butterfly).

What many people don’t know is that the monarch caterpillar itself has five stages of development. At the end of each stage the caterpillar molts (moults in British English).

By shedding its skin the caterpillar is able to continue growing; each successive stage is larger and heavier than the last. The caterpillar also undergoes slight changes in appearance at each stage.

By the end of the fifth stage of the monarch caterpillar’s development, it will have reached the size and weight required for pupation (i.e. turning into a chrysalis).

‘Instar’ is the term used for a stage in an insect (or other arthropod’s) development. The newly-hatched monarch caterpillar is the first instar. After the first molt it is known as the second instar, and so on.

The time the monarch caterpillar spends in each instar is dependent on temperature.

Because there can be considerable differences in size between individuals in the same instar, other characteristics should be taken into account when attempting to identify the stage in which a caterpillar is in. Take a look at the following pictures so you know what to look out for…

The newly-hatched monarch caterpillar is pale green in color and has a shiny, slightly translucent body. It will later develop dark stripes over a pale green background.

During this stage the caterpillar is between 2 and 6 mm in length and lacks tentacles. Fine hairs (known as setae) can be seen on the caterpillar’s body.

On hatching, the caterpillar eats its egg then starts eating the leaf of the milkweed plant on which it was laid.

If disturbed, both first and second instar caterpillars will drop from the leaf and hang by a fine thread. The thread is produced by silk-producing organs called spinnerets which are located in the caterpillar’s head below the mouthparts.

The caterpillar remains in the first instar stage for one to three days.

After the second molt, the monarch caterpillar’s body has lost any remaining transparency, and its black, yellow and white bands are visible.

The second instar monarch larva has a greater number of bristle-like setae.

Second instar monarch larvae are between 6 and 9 mm in length.

The monarch caterpillar spends a similar amount of time in the second instar stage as it did in the first (1 to 3 days).

Third instar monarch larvae are between 10 and 14 mm in length. Both the front and back tentacles can now be clearly seen.

The front pair of legs are smaller than the other two pairs and have started to migrate slightly nearer to the caterpillar’s head.

As with previous instars, the monarch spends from one to three days in the third instar, depending on temperature.

By the fourth instar the monarch caterpillar is between 13 and 25 mm in length. The front tentacles are now 5mm in length, while those at the back are around 2 mm in length. White spots on the caterpillar’s prolegs (the 5 pairs of ‘false’ legs at the rear of the larva’s body) are more easily visible.

This stage lasts from 1 to 3 days.

In its fifth instar, the monarch caterpillar is between 25 and 55 mm in length. Its front tentacles are around 11 mm long, and those at the back are 4 mm long. The white dots on the prolegs are by now very distinct, and the front legs noticeably smaller than the others and closer to the head.

The monarch caterpillar spends between 3 and 5 days in this stage of its development.

At this stage the caterpillar is at its largest, and has an almost plump appearance. It may be found away from milkweed plants as it seeks a suitable place in which to pupate.

When a suitable spot is found, the caterpillar creates a silk pad on the underside of a leaf. It then hangs head down from the pad and undergoes its fifth and final molt, with the outer surface of the chrysalis appearing from under the skin as it is shed.

After spending 10 to 14 days as a chrysallis, the adult monarch butterfly finally emerges.