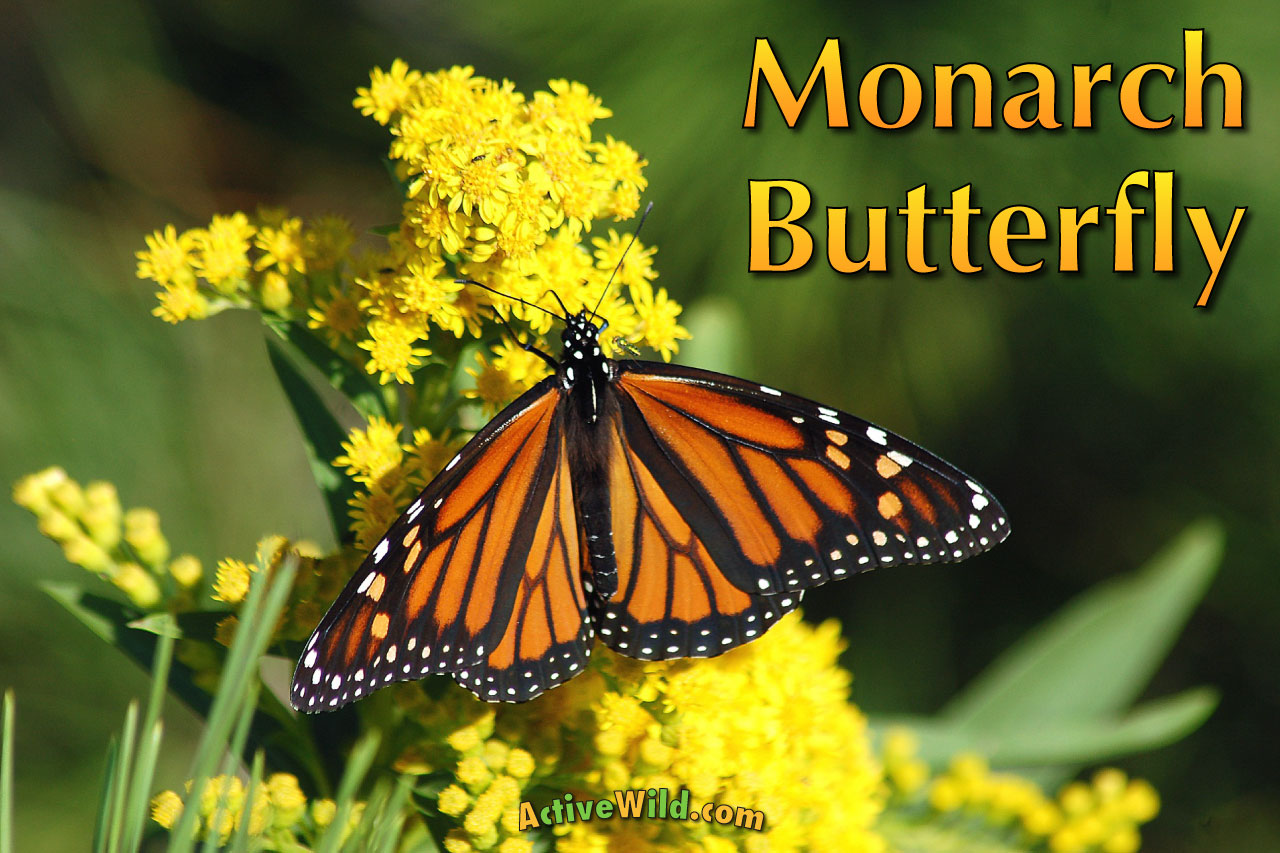 Monarch Butterfly Facts At A Glance

Click here or on the image below to download your free coloring & facts sheet. Scroll down to discover more about the monarch butterfly.

The monarch butterfly is a large butterfly famous for its incredible annual migration, which is considered by many to be one of the most spectacular natural phenomena in the world.

During the fall, millions of North American monarch butterflies migrate south to overwintering sites in California and Mexico, many covering distances of over 3,000 miles (4,831 km). (You’ll find out more about monarch butterfly migration further down the page.)

The monarch butterfly is a member of the Danainae butterfly subfamily. Butterflies in this subfamily are otherwise known as milkweed butterflies after the plants on which they feed as caterpillars.

The milkweed butterflies are a subfamily of the family Nymphalidae. Nymphalidae is the largest butterfly family, with over 6,000 species. Members of this family only use four of their six legs. Their forelegs, which are smaller, are kept curled up against the body. 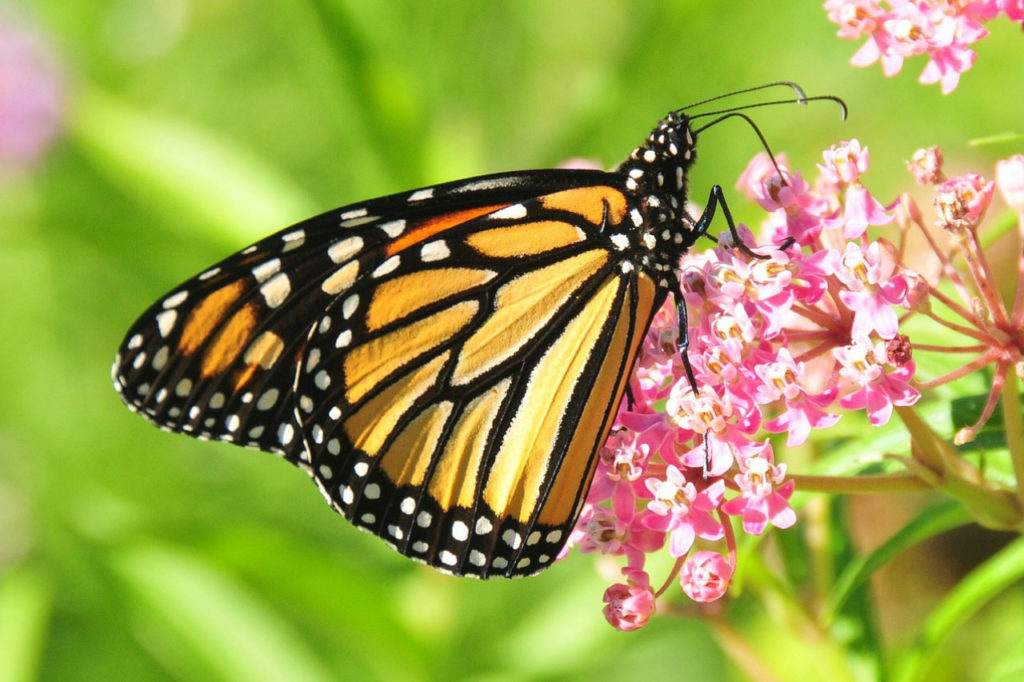 Both sides of the monarch butterfly’s wings are orange with black veins. The thick black border around the outer edges of the wings is speckled with white spots, and there are a few orange spots near the tips of the forewings.

The underside of the wings is similar to the top but with yellow-brown tips and larger white spots.

Male monarchs have a black spot at the center of the upper side of each of their hind wings. The veins are narrower than those of the female. Male monarchs also tend to be larger in size.

A rare grayish-white color variation, known as the ‘white monarch’ accounts for around 1% of the global population. In Oahu, Hawaii, however, around one in every ten monarchs are ‘white monarchs’.

Migratory monarchs tend to have larger and more angular wings than their non-migratory counterparts.

The monarch caterpillar is pale green and translucent when it first emerges. In later stages it develops an increasingly complex pattern of black, white and yellow bands. At each end of its body is a pair of antenna-like black tentacles.

The chrysalis of the monarch is blue-green with small yellow spots.

Most of the world’s monarch butterflies are found in the United States, Southern Canada, Central America and northern South America.

In the summer and warmer months of spring and fall, monarchs are found in breeding areas where milkweeds are abundant, such as agricultural fields, pastures and gardens.

Monarchs found in colder regions overwinter in areas with a dense cover of trees. This provides some protection from storms and also prevent the temperature from dropping too low.

In the spring (usually around mid-March to mid-May, depending on location), monarch butterflies make their way north from overwintering sites located in the southern United States and Central America.

In the late-summer / fall (mid-August to October), the butterflies begin the return journey south from their feeding / breeding grounds, which are located throughout the United States and southern Canada.

No single monarch butterfly will make the entire round trip. The springtime, northward part of the migration is split between as many as five generations of butterfly, each of which has a maximum lifespan of only around 4 weeks.

The journey finished by a monarch butterfly arriving in the northern United States may have been started in Mexico by its great-great-grandparents!

The real record-breakers are the monarch butterflies that migrate south. These butterflies may travel over 3,000 miles (4,831 km). The longest journeys made by individual monarch butterflies are thought to be around 4830 miles (7,778 km). The monarchs that make the southward migration are sometimes known as the ‘super generation’.

During the southbound migration the butterflies can travel around 50 miles (80 km) in a day, and reach altitudes of up to a mile.

Monarchs only migrate in the day, and are unable to fly if it is too windy or rainy.

The butterflies start arriving at their overwintering sites around late October, with the last monarchs arriving around December.

The overwintering monarchs cluster in trees and stop feeding until early spring, living off of fat reserves in their bodies. They begin breeding in spring.

Not all monarch butterflies migrate; those that don’t include subspecies found in the southeastern United States, the Caribbean and parts of Central / South America.

Monarch courtship begins with the male chasing the female in the air. Mating takes place on the ground. The male monarch transfers a spermatophore (a capsule containing sperm and nutrients) to the female. Both sexes usually mate more than once.

The female finds a milkweed plant and lays her cream or light green oval-shaped eggs on the underside of a young leaf. A single female can lay up to 1180 eggs.

The eggs hatch in around 4 days. The larval (caterpillar) phase has several distinct stages and lasts about 2 weeks. The caterpillars rapidly increase in size, and molt (shed their skin) 5 times.

At the end of the larval period, the caterpillar attaches itself upside down to a horizontal surface and forms a chrysalis. The adult butterfly emerges in 9 to 15 days.

What Do Monarch Butterflies Eat?

In its larval (caterpillar) stage, the monarch feeds on milkweeds (flowering plants in the genus Asclepias).

Adult monarchs feed on the nectar of a wide range of flowers. The butterflies also obtain water and some minerals from damp soil and gravel.

The adult monarch butterfly’s body contains toxins from the milkweed plants on which it fed as a caterpillar. Both caterpillars and adult butterflies advertise their toxicity to potential predators with their bright and contrasting colors. The use of warning coloration to deter predators is known as Aposematism.

Despite the toxins, the butterflies are preyed upon by a number of birds, including brown thrashers, American robins and several species of grackle, crow, cardinal and oriole.

Mice will also eat monarch butterflies. The black-eared mouse Peromyscus melanotis, which is able to withstand a high amount of the toxins found in a monarch’s body, is a significant predator of butterflies overwintering in Mexico.

Monarch eggs, larvae and pupae may be attacked by invertebrates such as spiders, wasps and ants.

Around 14% of monarch butterflies overwintering in Mexico are eaten by mice and birds.

Is The Monarch Butterfly Endangered?

The monarch butterfly is currently unassessed by the IUCN, but the global population of the species appears to be stable.

However, large declines have been observed in the population of migratory Northern American monarchs. These declines are mostly due to habitat loss.

Shrinking forest cover in Mexico (due to logging as well as agricultural and urban development) have reduced the size of suitable overwintering sites.

Milkweed plants in monarch breeding grounds in the United States have been affected by the increased use of herbicides.

How To Help Save The Monarch Butterfly

A number of schemes aimed at reversing the decline in the North American population of Monarch butterflies are in operation.

One such scheme is the Monarch Joint Venture, a national partnership of federal and state agencies, non-governmental organizations, businesses and academic programs working together to conserve the monarch butterfly migration.

2 thoughts on “Monarch Butterfly Facts, Pictures & Video: Find Out About The Lifestyle & World-Famous Migration Of This Incredible Insect!”