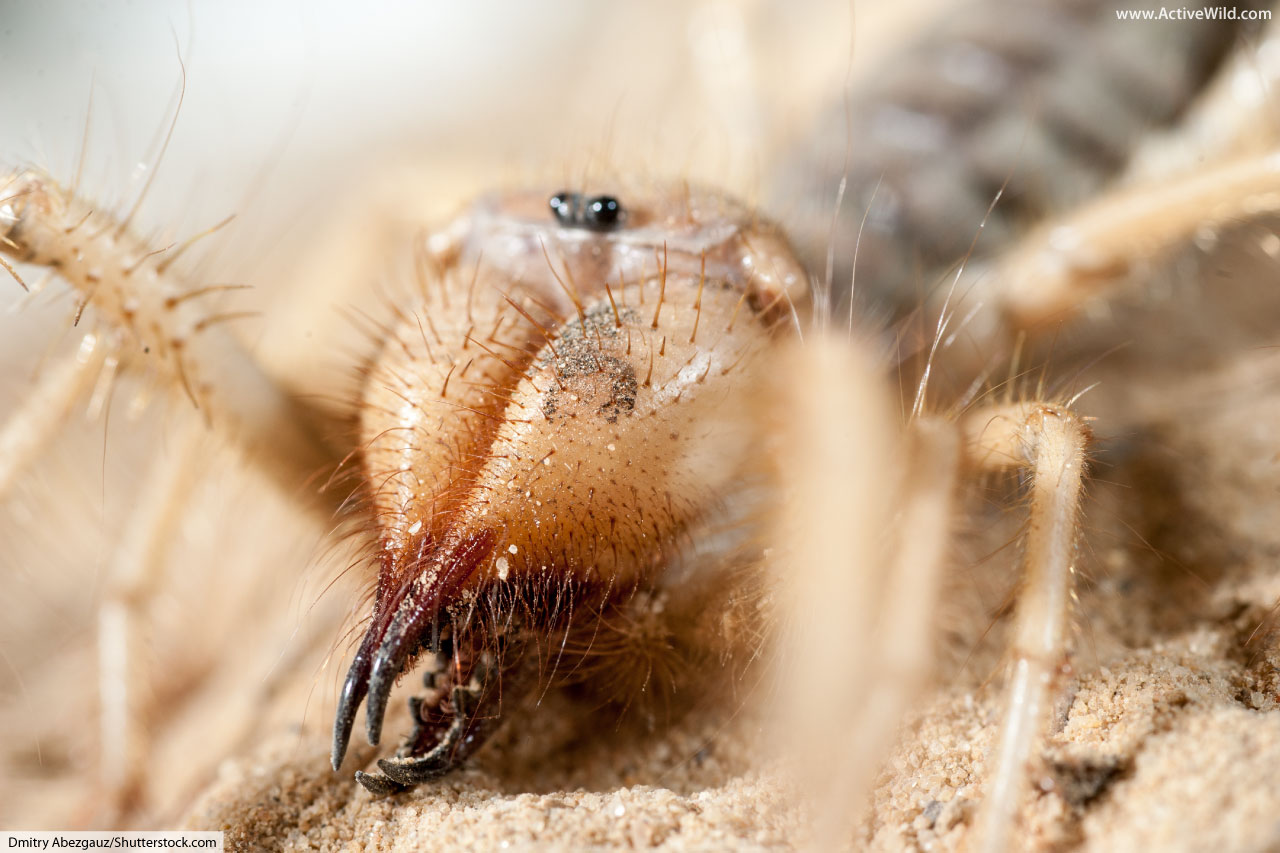 Despite the name, camel spiders are not spiders (and they’re obviously not camels!). In fact, camel spiders form an arachnid order all of their own, the Solifugae. Also known as wind scorpions and sun spiders, the Solifugae are found in desert habitats in many parts of the world.

Let’s find out more about these desert arachnids …

Camel Spider Facts At A Glance

Camel spiders are spider-like arachnids. These elusive, little-studied, invertebrates make up the arachnid order Solifugae. Other commonly-used names for animals in this group include wind scorpions and sun spiders.

Around 1,100 camel spider species are currently recognized. These belong to 153 genera, which are divided into 12 families.

*Confused by terms such as ‘genera’ and ‘families’? Check out our Animal Classification page and all will become clear!*

Camel spiders usually have hairy bodies and legs, and tend to be beige or brown in color. Their size varies dramatically from species to species; the smallest are just under 1 cm (0.4 in) in head-body length, while the largest reach lengths of up to 15 cm (6 in) (including legs).

(Compare this with an insect’s body, which has 3 tagmata: the head, thorax, and abdomen.)

The most conspicuous part of the camel spider’s prosoma is the pair of large chelicerae (modified, pincer-like jaws). In some species, these can make up a third of the animal’s entire body length.

There is a great deal of variation in the number of teeth and structure of the chelicerae of different camel spider species. Because of this, different species are often identified by their chelicerae.

Camel spiders have 4 pairs of segmented legs as well as a pair of tactile leg-like appendages called pedipalps. The ‘true’ legs are divided into 7 segments, the pedipalps into 5. On the tips of the pedipalps are adhesive organs which are used during hunting and mating.

Male camel spiders are usually smaller in size than their female counterparts, although their legs are usually longer. The male’s chelicerae are equipped with structures known as flagella which are not present in females.

Where Do Camel Spiders Live?

Camel spiders are found in tropical and subtropical desert regions in many parts of the world. They are present in Africa, the Middle East, the Indian subcontinent, North America and South America. Notably, they are absent from the arid regions of Australia.

The name Solifugae means “those that flee from the sun”. True to their name, most – but not all – camel spiders are nocturnal. During the day, camel spiders are usually found sheltering under rocks or in underground burrows.

Many camel spiders produce a defensive rattling or clicking noise by rubbing their chelicerae together.

Camel spiders are fast runners: individuals have been recorded moving at a speed of 16 km/h (10 mph).

Typically, the male approaches the female, touching her with his pedipalps. Occasionally, females have been observed to attack their partners during mating.

The initial contact is followed by the male producing a spermatophore (a packet of sperm). Depending on the species, the sperm is either inserted directly into the female’s reproductive opening or indirectly, with the male using his chelicerae to pick up and transfer the spermatophore.

After mating, the female digs a burrow into which she lays around 50 to 200 eggs. Some camel spider species are known to exhibit parental care, with the female aggressively guarding both her eggs and the newly-hatched young from potential predators.

Newly-hatched camel spiders are a translucent-white color and stick together in a cluster. The young develop through a series of stages known as ‘nymphal instars’. In some species, there are 9 to 10 instar stages before the animals reach maturity.

The young begin to hunt for food when they enter the second instar stage.

What Do Camel Spiders Eat?

Camel spiders are carnivorous. Alongside scorpions, they are considered to be top invertebrate predators in desert ecosystems.

Unlike true spiders, who generally employ a sit-and-wait strategy, camel spiders are aggressive hunters and actively move around in search of prey. Upon encountering a prey animal, camel spiders rear up on their back legs and grasp their meal with the help of the adhesive organs at the tips of their pedipalps.

After securing their prey, camel spiders begin to chop and saw it into pieces using their chelicerae. Then they cover the dissected prey with digestive fluids. These fluids contain enzymes that liquidize the remains of the prey. The camel spider then sucks the liquid remains into its mouth.

Camel spiders have a variety of predators, including bats, scorpions, and toads.

Are Camel Spiders Dangerous To Humans?

The camel spider’s powerful jaws are capable of inflicting a painful bite. Although there are many colorful stories told about camel spiders, they are not venomous and pose no real danger to humans.