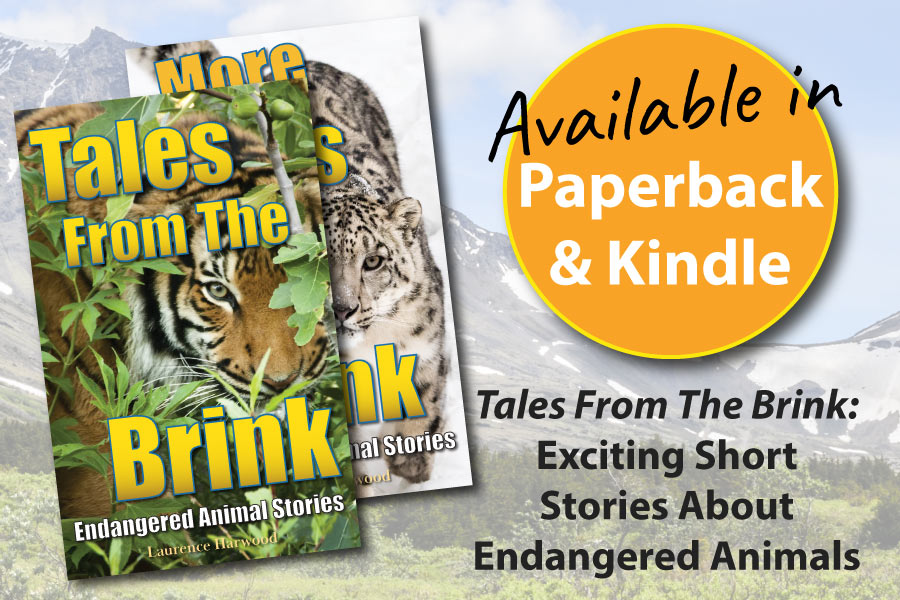 Endangered animal stories from Active Wild in paperback and on Kindle. Read exciting short stories about endangered animals and learn about their lives & struggles.

Tales From The Brink: Complete Edition

Find out more about this book here: Tales From The Brink: Complete

Tales From The Brink

1. The Heart Of The Forest – An Orangutan Story

In The Heart Of The Forest, Budi, a young Sumatran orangutan, has a strange feeling that something bad is going to happen to his rainforest home. He embarks on a quest to find a new place to live. During the course of his journey he meets many other rainforest animals… not all of whom are friendly. Will Budi succeed in his mission? What will he find waiting for him when he finally returns home?

Mother And Son tells the story of Darpan, a brave but reckless Bengal tiger. No longer a cub, Darpan is eager to prove himself to his fearsome parents.
One night, the tigers encounter strange, talking apes deep in the jungle. The apes don’t seem dangerous, and the tigers are hungry… should they obey their instincts and take what should be an easy meal?

In Escape From Lizard Gap, young mountain gorilla Lutalo has to deal with the new silverback. What happens when he ventures into the terrifying Lizard Gap?

4. Search For A Sister – A Sea Turtle Story

Written for young animal lovers, Tales From The Brink weaves information about the lives of the animals and the threats that they face into exciting, memorable storylines.

Search For A Sister tells the story of Carrie, a leatherback turtle who travels thousands of miles on an epic migration from the warm Florida coast to the frozen Arctic north.
She leaves with her sister, but returns alone. Will the two ever see one another again?

Learn more about the animals as you share their adventures. Order your copy today:

Available in paperback or for Kindle.

Follow the links below to view Tales From The Brink at your country’s Amazon.

More Tales From The Brink

Following on from the original book, More Tales From The Brink contains four new endangered animal stories. Learn more about the lives of these threatened animals as you share in their exciting adventures.

In The Mountain Ghost, Russian shepherd Vasily sees something in the mountains that he hasn’t seen since he was a boy. Was it real, or did he imagine it? And what happens when he gets caught out in the snowstorm?

2. Lost In The Arctic – A Blue Whale Story

Lost In The Arctic features Arthur, a blue whale who spends most of his life in a dream. As he migrates to the Arctic, Arthur suddenly wakes to find he’s lost all contact with the other whales… will he ever see his friends again?

3. The Rivals – A Giant Panda Story

The Rivals tells the story of two young giant pandas who are always fighting over the best bamboo. One day, strange apes appear in the forest and the pandas’ friend goes missing. What will the bitter enemies do?

In Kabir The Hero, a thoughtful young Indian elephant is on the brink of adulthood. Can he summon up the courage he needs to overcome a bully and help find a missing baby elephant?
What is waiting for him in the deadly moonlit forest?

From specialist wildlife publisher Active Wild, More Tales From The Brink contains beautifully told stories that will entertain and educate. A must for all young animal lovers.

Follow the links below to view More Tales From The Brink at your country’s Amazon.