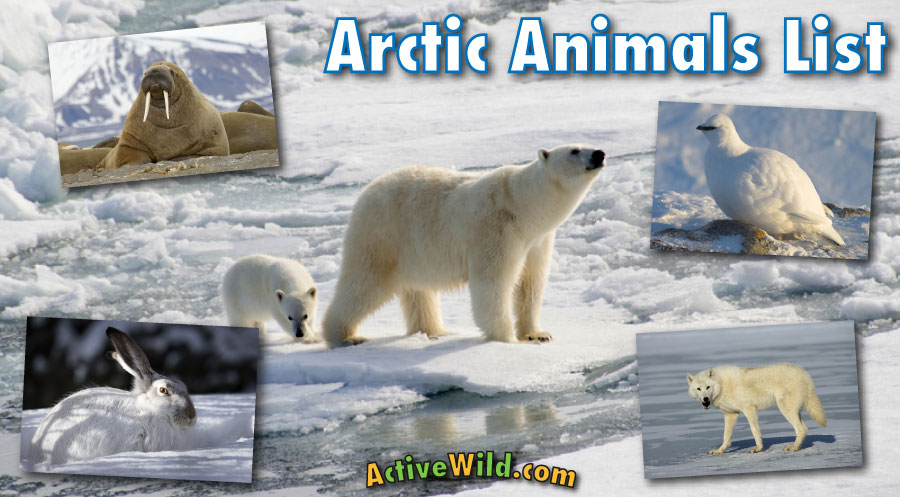 On this page, you’ll find pictures and facts on these and many other Arctic animals.

Despite being one of Earth’s most hostile environments, the Arctic is home to many different species. Many of the Arctic animals on this list have special adaptations that enable them to live either on the frozen Arctic tundra or in the icy waters surrounding the North Pole.

Examples of animal adaptations for living in the Arctic include:

You can click on the pictures to discover more facts and figures about many of the animals.

The Arctic Fox has several adaptations for living in the Arctic environment. The most obvious of these is its thick fur, which changes color from brown in the summer to white in the winter. The fox’s coat provides both insulation and camouflage.

This small Arctic rodent is found in Alaska, Canada and Russia. In order to survive the harsh northern winter, it hibernates in a burrow.

In fact, the Arctic ground squirrel has one of the longest hibernation periods of any animal, remaining inactive for two thirds to three quarters of the year!

Arctic Hares have smaller noses and ears than other hares; this prevents heat from being lost from these uninsulated areas. 20% of their body is fat – another adaptation for living in extreme Arctic conditions.

However, all that additional insulation doesn’t slow them down. These speedy lagomorphs* are able to reach speeds of up to 60 km/h (40 mph)!

* A lagomorph is a member of the order Lagomorpha, the animal group that contains hares, rabbits and pikas.

The Arctic Tern is one of nature’s true voyagers. Flying over 19,000 km in a year, these incredible birds see more daylight hours than any other creature, and experience two summers every year.

One of our favourite animals on the Arctic animals list, the Arctic Wolf is found in Canada’s frozen north. This Grey Wolf subspecies is smaller than the similar North-Western Wolf (another wolf subspecies) and has narrower features.

Believe it or not, the Arctic wolf is the same species as your pet dog! Domestic dogs and Arctic wolves are both subspecies of Grey wolf, Canis lupus.

Due to its Arctic habitat, the Arctic Wolf has been hunted by humans less than other wolves.

The Bald Eagle is both the national bird and the national animal of the USA. It is found not just in the Arctic, but also in a variety of other habitats throughout North America, from Canada to northern Mexico.

The bald eagle is a member of the genus Haliaeetus, a group of eagles also known as ‘sea eagles’. Fish forms the majority of the bald eagle’s diet.

The beluga whale is found around the coasts of Russia, North America and Greenland. It is a highly social species, usually living in small pods of around 10 animals.

The pure white color of the beluga whale provides camouflage when it is swimming under the Arctic ice.

Caribou are also known as reindeer, especially in Europe. These hardy animals have several adaptations for living in a cold-climate, including enlarged chambers in the nose (to warm up the cold Arctic air) and hooves that get both smaller and harder in the winter – providing improved grip in the ice and snow.

Herds of caribou in North America make the longest migration of any land mammal.

The Dall Sheep is found in Subarctic areas of Alaska and Canada. It lives in rocky, mountainous regions, and is an excellent climber.

The Stoat, or Ermine, is a member of the weasel family. (The name ‘ermine’ is sometimes only used to refer to the animal while in its white winter coat.)

Although small, stoats are skillful hunters, capable of preying on animals (such as rabbits) considerably larger than themselves. Stoats will often live in the burrows of their victims rather than digging their own.

Native to the North Atlantic Ocean around Canada and Greenland, Greenland sharks live further north than any other type of shark. Greenland sharks are rather slow swimmers and prefer to catch prey while it is sleeping. They also scavenge food left by other predators.

The harp seal is born with a yellow coat that turns white after three days. As the animal gets older it becomes silvery-grey.

Harp seals have a thick coat of blubber to keep them warm. Their flippers act as heat exchangers, cooling them down in the summer and warming them up in the winter.

Lemmings are small rodents with long, soft fur. They are herbivorous, and eat grasses, roots, and leaves. Lemmings remain active during the winters rather than hibernating. They stock up on grasses before the winter, and burrow under the snow to find food.

Moose are the largest members of the deer family. These large-antlered animals are most commonly found in Alaska, Canada, Russia, and Scandinavia. Moose are unique among deer in that they are solitary and don’t live in herds.

Although usually slow moving, moose can become agile and aggressive when frightened or angered.

During the mating season, the male Musk Ox produces a musky odour to attract females, which is how the animals get their name. Musk Oxen have thick fur coats to keep them warm. Both males and females have long, curved horns.

Narwhals are medium-sized whales with one highly distinguishing feature: a long tusk that projects from the front of their heads. The tusk is in fact an extended front tooth. Narwhals spend the whole year in the arctic waters surrounding Russia, Greenland, and Canada.

Also known as the killer whale, this toothed whale is a member of the dolphin family. Orcas have distinctive black backs and white chest and eye patches. Orcas prey on other marine creatures, often working in a group. Orcas are apex predators, having no natural predators themselves.

No arctic animals list would be complete without the polar bear. Polar bears are marine mammals. They are able to swim long distances in cold waters and are also fast movers on the land. Polar bears are the largest type of bear.

Ptarmigans have white plumage during the winter which provides camouflage against the snow. Ptarmigans feed on fruit and berries in the summer, and forage for food under the snow in winter.

Ptarmigans are also known as ‘rock ptarmigans’ and ‘snow chickens’.

Puffins have black and white feathers and brightly-colored bills. They spend most of their lives far out at sea, but for a few months each year gather on cliffs to form breeding colonies.

The ringed seal is the most common seal found in the Arctic. One of the smallest species of seal, it has a small, cat-like head and a plump body.

Sea otters are the heaviest mustelids (members of the weasel family, Mustelidae), but are one of the smallest marine mammals. Sea otters have thick fur coats for insulation, and they tend to spend more time in the water than on the land.

Snow geese raise their young in northern America and Canada at the start of summer, then migrate south in the winter.

Snow geese often stop to feed on crop fields during their migration. Their bills are adapted for digging roots out of the ground.

The snowshoe hare’s coat changes color from brown in the summer to white in the winter. This provides year-round camouflage.

The species gets its name from its large, furry-soled hind feed. They are adapted to prevent the hare from sinking into the snow.

The walrus is easy to recognise with its large tusks, long whiskers, and short flippers. These large, heavy creatures used to be hunted for their meat and fat. This practice has now been banned in order to protect the species.

The wolverine has a well-deserved reputation for being a ferocious predator that isn’t afraid to take on animals bigger than itself. Like the sea otter (see above), the wolverine is a member of the weasel (mustelidae) family.

We hope that you’ve enjoyed this list of Arctic animals.

Now that you’ve met the region’s wildlife, why not discover more about the Arctic itself? You’ll find some incredible facts here: Arctic Facts.

You can find out about the animals of the South Pole here: Antarctic Animals Pictures and Facts.

Or, take a look at our other animal lists pages:

Discover Amazing Animals From All Around The World