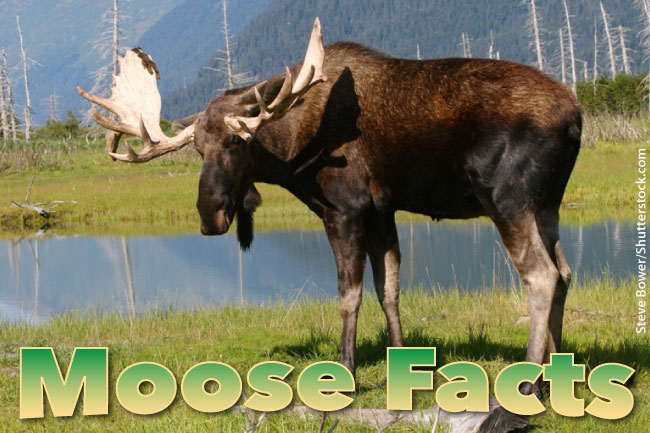 This article contains moose facts for kids and adults, and is part of our Arctic Animals series. You can find out about more amazing Arctic and subarctic animals here: Artic Animals List.

Read on for moose information, pictures and video …

The moose lives in temperate and subarctic regions of the northern hemisphere (the ‘top’ half of the world).

In some parts of Europe, the moose is known as an ‘elk’. However, in North America, the word ‘elk’ refers to another large species of deer – not a moose.

Moose are diurnal (active during the day). They are solitary animals, and are rarely seen in groups outside of the breeding season. During the breeding season, the moose’s cries can be heard throughout the forest, and both males and females vocalise loudly during this time.

The moose is a big, heavily-built deer. It is dark brown in colour, and from the spring to autumn the male moose has huge antlers. The Moose has a long face with prominent eyes and ears. It can use its big front lip to pull vegetation towards its mouth.

How Big Is A Moose?

Between the spring and the mating season (in September and October), the male moose grows impressive antlers. These can be over 2 m (6.5 ft.) wide. The moose’s antlers are one of the quickest growing body parts in the animal kingdom.

The moose’s antlers are ‘palmate’, which means ‘shaped like a hand’. They have wide flat regions with spiked edges.

During the breeding season, male moose use their antlers to fight each other for the right to mate with females.

After the breeding season, the moose’s antlers drop off. This helps the animal to conserve energy during the winter.

A moose’s antlers may improve its hearing by reflecting sound towards its ears.

You can see some amazing footage of bull moose in the breeding season in the video below:

The scientific name for a moose is Alces alces. It is a member of the deer (Cervidae) family.

There are eight different types of moose. There are only very slight differences between these subspecies and they are found in separate areas.

Where Do Moose Live?

Moose are solitary animals, living alone in forests of the Northern Hemisphere. They are found in Canada, Alaska, and in some northern and western states of the US.

In Europe moose are found in the north and east of the continent. Norway, Sweden, Finland, Latvia, Estonia, Poland, Czech Republic, Belarus, Ukraine and Russia are all known to hold moose populations.

The moose’s range has shrunk in both North America and Europe due to habitat loss and hunting.

Moose don’t like being too warm and will migrate north to cooler regions in the summer months, and south to areas in which there is more food in the winter.

Moose are surprisingly good swimmers and are often seen in the water. Their mouths are specially adapted to allow them to eat underwater, without having to raise their heads clear of the water.

What Does A Moose Eat?

Moose are herbivores (plant eaters), but apart than that aren’t all too picky as to what they eat!

Moose eat a wide variety of vegetation, including flowering plants, fruit, bark, tree shoots and shrubs. Up to half of their diet is made up of aquatic plants growing on the bottom of lakes and streams.

Because of their large size, they need to eat nearly 10,000 calories per day in order to maintain a healthy body weight. That’s almost five times more than the average human being needs!

As they travel to new areas, moose will sometimes wander onto roads. Moose also occasionally wander onto roads to lick the salt put down by humans as a de-icer. This is harmful for the moose, as de-icing salt contains additional chemicals. It also creates a hazard for drivers.

Road collisions with moose are devastating for both moose and drivers. It’s not unusual for small cars to be completely destroyed after colliding with the heavy animals.

In many areas where moose are common, large spaces are left alongside the roads so that drivers can see moose emerging from the trees.

In some Scandinavian countries, moose warning signs became (unofficial) souvenirs, and irresponsible tourists would remove them.

The world’s moose population is stable, and moose are rated as ‘Least Concern’ by the IUCN. In some areas, the moose’s range is increasing.

(You can find out more about endangered animals here: Endangered Animals Facts.)

However, there are regions (for example in North American temperate forests) in which the moose population is falling. It is not clear exactly why this is occurring, but it may be related to habitat loss or a change of habitat.

Being a big animal, the moose doesn’t have many predators. However, bears (brown, grizzly, and black) and Cougars (Mountain Lions) have been known to take moose calves and even adult animals.

Wolves are also a threat. In some areas, moose are the wolves’ main food source.

Wolverines will take calves or old or weak moose, and Orcas have been known to take moose swimming across inlets. In Asia, tigers are a threat.

An adult moose is not an easy meal. Moose are known to be aggressive, and can kick out with both their front and back legs. Moose can kick in any direction, including sideways. They are quite capable of killing an unwary wolf or black bear. It is very unwise to approach a moose that is visibly distressed.

Moose is a popular food in many parts of the world, and the moose is frequently a target for hunters. If hunting is controlled, and carried out responsibly, this doesn’t have a negative effect on local moose populations.

Due to its complex diet, the moose does not make a good domestic animal. Attempts have been made to farm moose, but only on a small scale.

We hope that you have enjoyed reading these moose facts. This majestic forest giant is a popular animal wherever it is found.