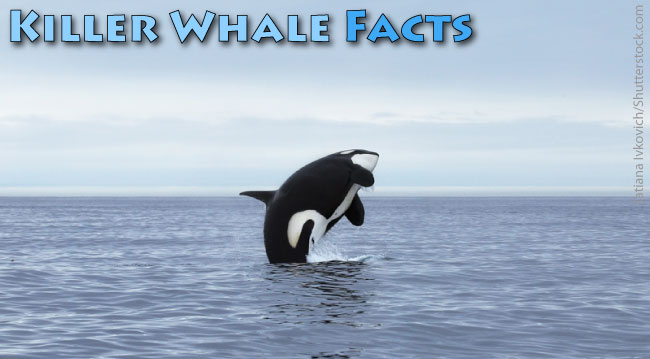 Killer whales – also called orcas – are fearsome ocean predators. They are mammals, but are they actually whales? Read these killer whale facts for kids to find out …

The killer whale is the largest member of the oceanic dolphin family, Delphinidae.

Dolphins (including the orca), sperm whales, beaked whales and porpoises are all members of a larger group of animals known as ‘toothed whales‘.

This group is itself part of the group of animals known as ‘whales’ – or Cetacea, to give it its scientific name.

The Cetaceans’ closet living relative is the hippopotamus!

The cooperative methods of hunting exhibited by killer whales have also earned them the nickname, ‘Wolves of the Sea’. Today, killer whales are most commonly called Orca.

Killer whales have a distinctive coloration, with black backs and fins, a lighter ‘saddle patch’ behind their dorsal fin, and white undersides. They also have white patches on their sides and behind their eyes.

The huge black dorsal fin is unmistakable. It can grow up to 1.8 m (almost 6 ft.) and its shape and condition can be used to identify individual killer whales in monitored populations.

There are bigger killer whales out there: specimens almost 32 feet (10 meters) long and weighing 7,500kg (16,500 pounds) have been recorded!

Where do Killer Whales Live?

Killer whales can be found in all of the world’s oceans, and inhabit both polar and tropical regions. They are the most widely distributed mammals after man. However, killer whales are most abundant in cold, temperate coastal areas.

The world population of Killer whales is estimated at around 50,000 animals.

Killer whales live and hunt in groups called ‘pods’ which may be resident or migratory.

Killer whales like to feast on fish (including sharks), cephalopods (squid and octopus) as well as other marine mammals, and sometimes even turtles and seabirds.

Killer whales are skilled hunters and use methods such as ‘wave-hunting’ to prey on seals. The Killer whales will ‘spy-hop’ to find seals resting on ice floes and then work together in groups to generate waves, disrupting the ice and causing the seal to slip into the water where the Killer whales can kill it.

Like other dolphin species, Killer whales can use echolocation to hunt, producing sound waves that bounce off target objects or prey animals, letting the Killer whales know information such as the size or the animal and the distance to it.

Studies have shown that resident populations tend to feast on fish whereas migratory ones prefer marine mammals.

The video below shows some amazing underwater views of killer whales. Skip to around 1:34 to get the best views!

Female Killer whales give birth to a single baby (calf) every 3 to 10 years after 17 months of pregnancy. The mothers will assist the baby in reaching the surface to breath within 10 seconds of birth.

Like all dolphin species, Killer whales are excellent communicators, and each pod has distinctive noises (‘accents’) that are recognized by members. In the wild, female Killer whales can live as long as 80 years, and males 50-60 years.

Killer whales are listed as ‘data deficient’ on the IUCN Red List. Killer whales are not extensively hunted by humans, but have long been captured to be kept in captivity. Due to their incredible intelligence, Killer whales can be trained to do amazing tricks. However, conditions in captivity are not well suited to such large, social animals and captive Killer whales tend to die a lot younger than those in the wild. Killer whales are also sensitive to over-fishing and offshore energy activities such as oil exploration and construction of wind farms.

Several charities are dedicated to whale and dolphin conservation, one of which is Whale and Dolphin Conservation.

Want to learn about more amazing animals? Check out our Arctic Animals list.