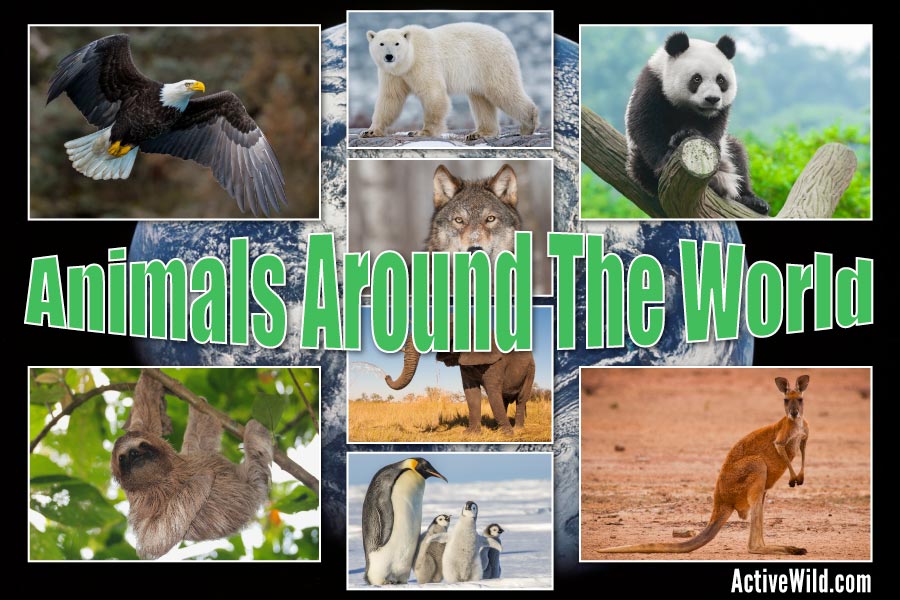 The world is home to a vast number of animals; there are over 1.5 million recognized living animal species, and likely millions more still to be discovered and named.

Animals first appeared in the sea over 600 million years ago, and subsequently evolved to live in the majority of Earth’s aquatic and terrestrial (land) habitats. Today, animals are found all around the world, from the rainforests of South America to the frozen shores of Antarctica, with every continent being home to a unique collection of species.

On this page is a continent-by-continent guide to animals around the world.

Scroll down to view examples of animals from each continent, or use the links below to visit pages containing information on animals from specific continents (and the Arctic).

Africa is the world’s second-largest continent. With habitats ranging from tropical rainforest to desert, Africa is home to many of the world’s most famous animals.

One of the best-known animal habitats in Africa is the savanna (or savannah in British English), a woodland whose widely-spaced trees allow a carpet of grass to cover the ground.

The savanna is home is home to iconic African animals such as the lion, cheetah, African plains zebra, African buffalo, antelopes such as the blue wildebeest, common eland, impala and hartebeest; and both the white and black rhinoceros.

Lying off the coast of East Africa is the island country of Madagascar. Separated from the mainland, it is home to many animals that are found nowhere else on Earth, including all 100 or so species of lemur.

Antarctica is a vast frozen continent at the far south of the world. The world’s fifth-largest continent, it is covered in a thick layer of ice, and surrounded by the icy waters of the Southern Ocean.

Antarctica has very little precipitation, either in the form of rain or snow, and is technically a desert. It is the world’s coldest, driest and windiest continent.

Being such an inhospitable place, Antarctica is low in biodiversity. Very little life exists in the continent’s frozen interior. Most Antarctic species are found on the coast, particularly on the Antarctic Peninsula; the northernmost part of Antarctica.

Animals found on Antarctica include penguins such as the emperor and chinstrap penguin; seals such as the crabeater and southern elephant seal; and seabirds such as the wandering albatross and kelp gull.

In the Southern Ocean around Antarctica are found cetaceans such as the Southern right whale, blue whale, sperm whale and killer whale.

The Arctic is not a continent; it is a region encompassing the Arctic Ocean and the northernmost parts of Europe, Asia, and North America.

Vast areas of the Arctic Ocean freeze during the winter; the resultant sea ice is an important habitat for numerous Arctic species, including one of the Arctic’s best-known animals: the polar bear.

Much of the land in the Arctic is tundra, a habitat with no trees and permanently frozen soil. Many Arctic animals have evolved numerous adaptations to allow them to live in this inhospitable environment, including thick coats and insulating blubber.

Asia is the world’s largest continent, covering around 30% of Earth’s total landmass. (In some parts of the world, Asia and Europe are considered to be subcontinents of an even larger continent, Eurasia, rather than separate continents.)

Located in Asia are the Himalayas Mountain Range; the Eurasian Steppe (a vast grassland that stretches from East Europe to East Asia); the deserts of the Middle East; and the tropical rainforests of Southeast Asia.

Asia is home to the largest number of humans of any continent; around 60% of all humans live in Asia. This has put pressure on many Asian animals, with many species becoming endangered due to habitat loss.

Australia may be the world’s smallest continent, but the country of Australia (which includes mainland Australia, the island of Tasmania, and other smaller islands) is the world’s sixth-largest by area.

Being surrounded by the Indian and Pacific Oceans, Australia is isolated from other continents. Its wildlife has therefore evolved independently, and many Australian animals are found nowhere else on Earth.

With habitats ranging from its desert interior to coastal rainforests, Australia is home to many of the world’s most recognizable animals, including the koala, emu, platypus, dingo, Tasmanian devil and dugong; kangaroos and wallabies; wombats, possums, bandicoots; and goannas such as the perentie.

Europe is a continent in the Northern Hemisphere that, along with Asia, makes up the landmass known as “Eurasia”. (In some countries, Europe is considered a subcontinent of the continent Eurasia, rather than a continent itself.)

Europe is the world’s second-smallest continent, being smaller than Antarctica and larger than Australia.

Europe is home to a wide range of habitats, including taiga / boreal forest, tundra, temperate forest, steppe, the Alps, Pyrenees, and other mountain ranges; the Atlantic and Arctic Oceans, the Mediterranean Sea, and numerous large rivers and lakes.

Animals Around The World: Conclusion

From polar regions to tropical rainforests, the variety of habitats on Earth is vast and the diversity of animal species correspondingly so. On this page is a brief overview of animals around the world; visit the pages below to see more animals from each continent and a variety of habitats.