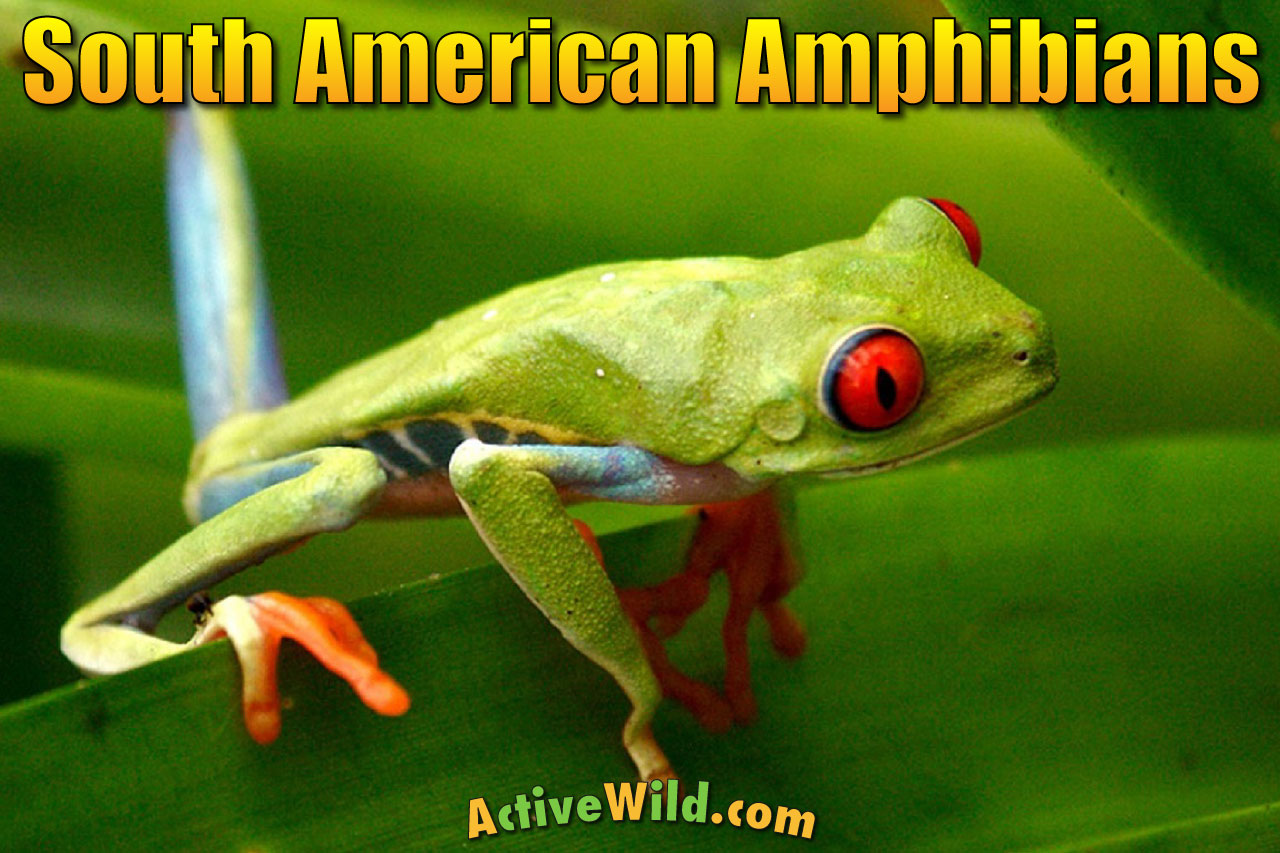 South America is home to a huge variety of amphibians, many of which are found in the continent’s tropical rainforests. On this page we’re gong to meet some of South America’s most amazing amphibian species.

South America is particularly well-known for the number and diversity of its frogs. Caecilians are also well-represented on the continent. Salamanders, however, generally prefer temperate regions in the Northern Hemisphere; relatively few are found south of the Equator. None are found south of the Amazon basin.

Among the amphibians on this list you’ll find: frogs whose tadpoles develop in their parents’ mouths; frogs whose internal organs can be seen through their transparent skin; and frogs whose bodies contain enough poison to kill up to twenty humans!

You can find in-depth information on many of the amphibians featured in this list by following the links provided.

The Argentine horned frog is a striking-looking amphibian, and not just because of its brightly-colored skin. It also has horn-like projections above the eyes and a huge mouth, which accounts for around half of the animal’s size.

This South American amphibian is a voracious predator, and will eat almost anything that it can fit into that enormous mouth; even mammals and other frogs. Its huge mouth and big appetite has led to the frog’s alternative name: the ornate pacman frog! 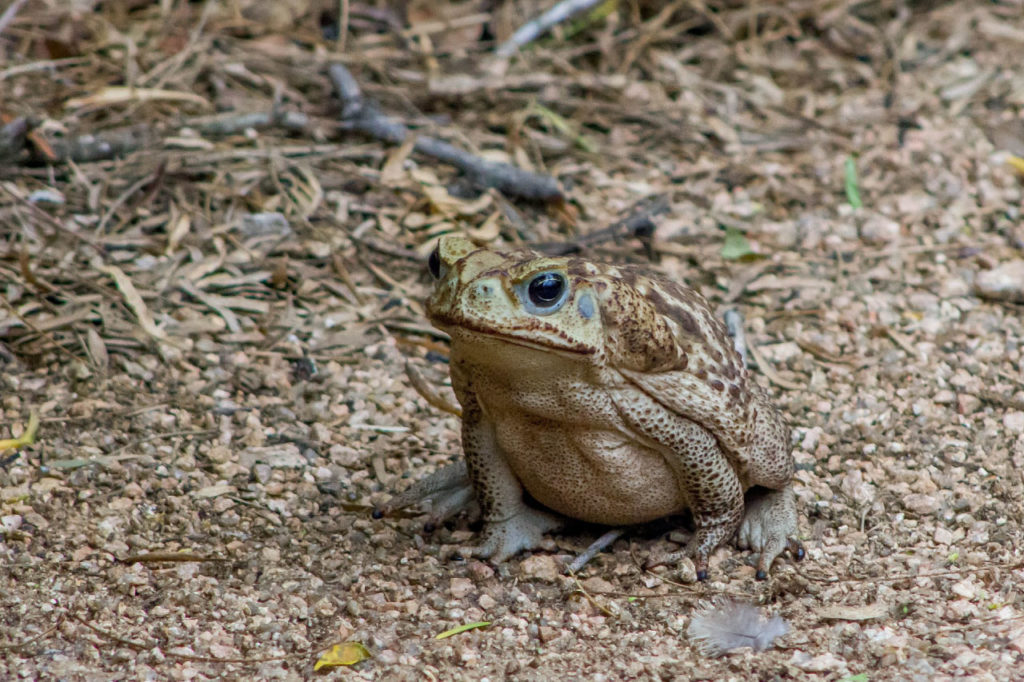 The cane toad is the world’s largest ‘true’ toad. (True toads are members of the family Bufonidae.) Its body (not including its limbs) reaches lengths of up to 24 cm (9.4 in).

The cane toad is native to Central and Northern South America. The species has also been introduced to many other parts of the world, usually as an attempt to control crop-damaging insects.

This has proved to be incredibly harmful to many ecosystems; poisons secreted by the cane toad’s skin can be fatal for native wildlife.

There is a third type of amphibian that isn’t as widely known as either the frogs or the salamanders: caecilians. Caecilians are worm-like animals that are mostly blind. They usually live underground, but some South American caecilians live in water.

The Cayenne caecilian is an aquatic caecilian found in the Amazon rainforest. This eel-like predator emerges from its burrow at night in order to prey on insect larvae, crustaceans and small fish.

Coquis are small frogs that are only found on Puerto Rico. The common coqui Eleutherodactylus coqui is a national symbol of the island.

Coquis are named after the sound of their calls. There are several species of Coqui – all are of the genus Eleutherodactylus.

Darwin’s frog is found in forest streams and marshes in Chile and Argentina.

This South America amphibian has a fascinating life cycle. Once the larvae inside the eggs begin to move, the male takes the eggs into his mouth. The eggs then hatch and the tadpoles undergo metamorphosis in the vocal sacs of the male frog. They then exit their father’s mouth as frogs!

Frogs in the family Centrolenidae are known as ‘glass frogs’. They are so-called due to their translucent skin, through which the frogs’ internal organs can be seen!

There are many different species of glass frog, and they are found in many parts of Central and South America. Glass frogs spend much of their lives in the trees.

The horned marsupial frog is one of a number of ‘marsupial frogs’ in the family Hemiphractidae. Marsupial frogs are so-named because the females have special pouches on their backs in which their young develop.

The horned marsupial frog changes color at night, when it becomes tan rather than brown.

The entire larval (tadpole) stage of the horned marsupial frog’s development takes place in the mother’s pouch. The young emerge from the pouches as small frogs.

The lowland tropical bullfrog is a small frog found in northern South America east of the Andes. The species reaches a maximum length of 30 mm (1.2 in). The skin is brown and marked with darker spots.

Unlike most amphibians, the lowland tropical bullfrog doesn’t require a body of water in which to lay its eggs. Instead, its eggs and tadpoles develop in foam nests in the ground.

Most of South America’s amphibians are of the frog / toad variety. Salamanders are much better represented in North America, with comparatively few being found south of the Equator.

However, there are some salamanders present in South America. One of these is the Nauta salamander. Like many South American salamanders, it is a member of the family Plethodontidae. Members of this family are known as the ‘lungless salamanders’.

As the name suggests, amphibians in this family lack lungs. Instead, they are able to ‘breathe’ via their skin and tissue in their mouths.

The Nauta salamander is found in the lowland rainforests of Central and South America. It reaches lengths of around 10 cm (4in.) and its color is variable.

The species inhabits the rainforests of Central and South America. Males possess elongated ‘humeral spines’ – extensions of the humerus bone in the arm. These are used fighting over territory.

The paradoxical frog is so-named due to the difference in size between its larval (tadpole) and adult stages. The tadpoles of this South American tree frog are huge – reaching lengths of over 22 cm (8.6 in.) The adults, however, reach a maximum length of just 75 mm (3 in.).

Poison dart frogs get their name from the poisons secreted by glands in their skin. Indigenous hunters would dip the tips of their darts in these poisons, making the weapons even more lethal.

Rabbs’ fringe-limbed treefrog is a rare species of tree frog that is now believed to be extinct. The species was found in Panama, where it inhabited the canopy layer of a small area of cloud forest.

The species was able to glide from tree to tree using the webbing between its digits to slow its descent.

The species also had a unique way of feeding its tadpoles: they would eat their father’s skin.

Sadly, Rabbs’ fringe-limbed treefrog is now believed to be extinct. 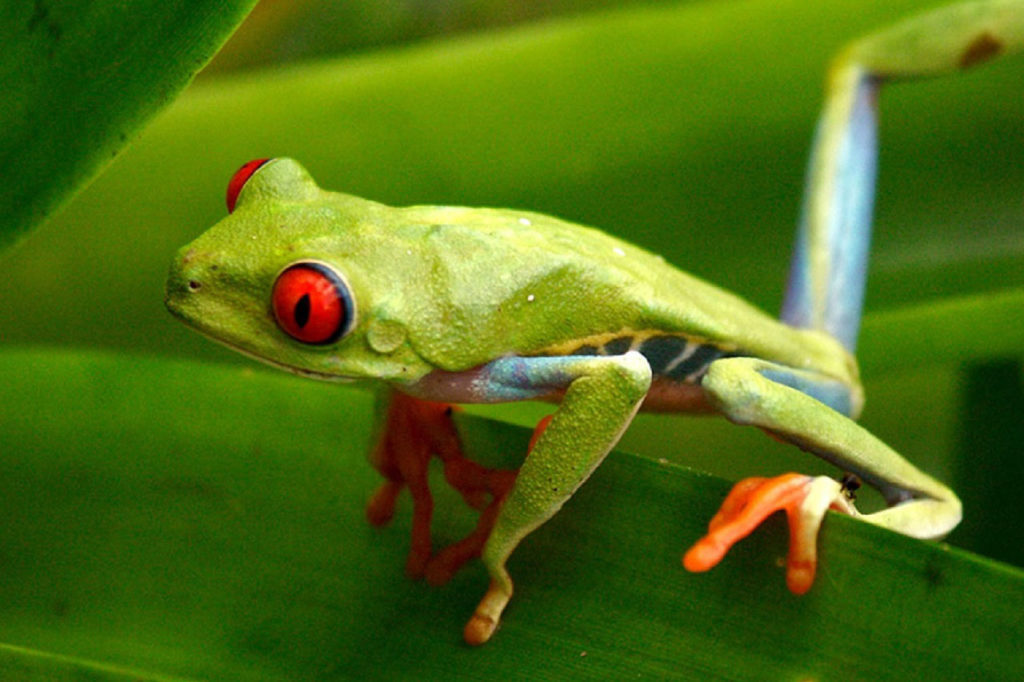 The red-eyed tree frog is one of the best-known amphibians of South America. This distinctive amphibian is found in rainforests from southern Mexico to Columbia.

The red-eyed tree frog lives in the rainforest canopy. It relies on its coloration to provide camouflage from predators, but does have one trick up its sleeve … if threatened, it will quickly flash open its large red eyes in an attempt to startle the would-be aggressor. 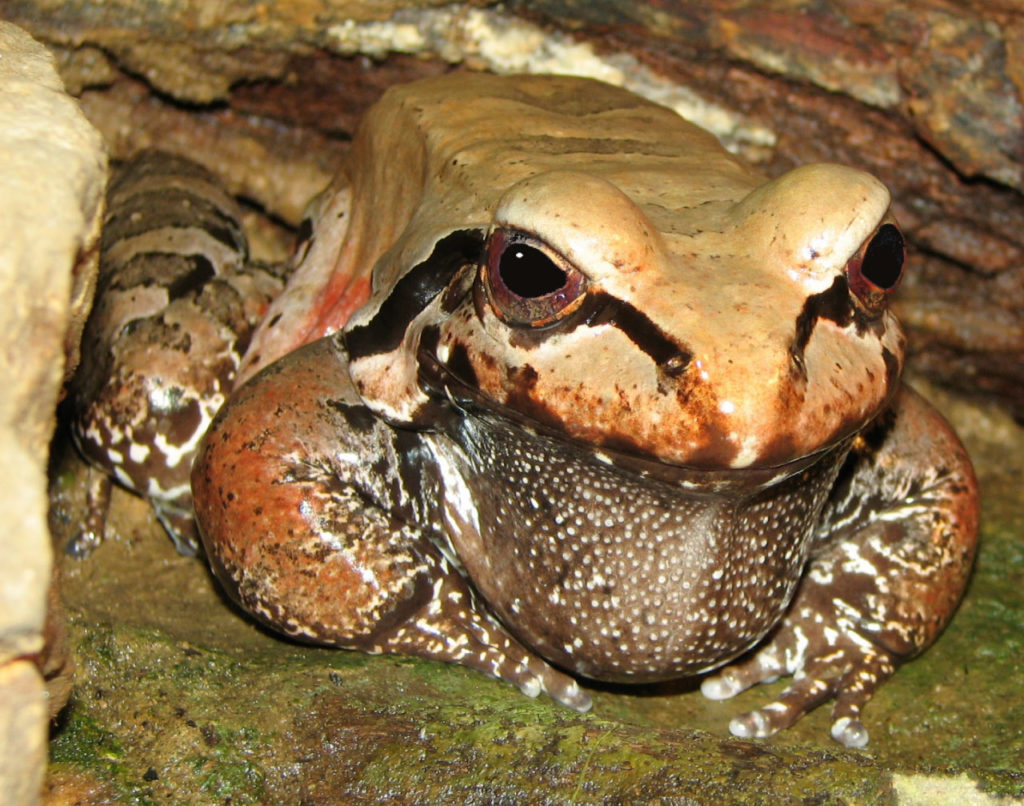 The smoky jungle frog (also known as the South American bullfrog) is a large frog found in Bolivia, Brazil, Colombia, Ecuador, French Guiana, and Peru. Females are larger than males, and can grow up to 18.5 cm (7.3 in.) in body length. The tadpoles are also large, reaching lengths of up to 83 mm (3.27 in.). Males have a spine on each of their thumbs and two further spines on their chests.

As a defense against predators, the smoky jungle frog is able to secrete a large amount of toxic slime.

Many species of spikethumb frogs are either endangered or critically endangered. This is mainly due to habitat loss caused by deforestation.

One of South America’s most distinctive amphibians is the Surinam horned frog (also known as the Amazonian horned frog). Its mouth is around 1.6 times wider than the length of its body. To add to its already bizarre appearance, the frog has a horn-like projection above each of its eyes.

The Surinam horned frog burrows among the leaf litter of rainforests. It is a voracious predator, and will take other frogs, small reptiles, mammals … and just about anything else that will fit into its huge mouth!

The waxy monkey tree frog is a member of the family Hylidae, otherwise known as the true tree frogs. As the name suggests, the members of this family spend most of their lives in the trees.

The waxy monkey tree frog is found in the Gran Chaco – a hot, dry region covering parts of Argentina, Bolivia, Paraguay and Brazil.

The species attaches its eggs to a leaf overhanging a body of water. The leaf is folded to create a nest. When the eggs hatch, the tadpoles drop into the water.