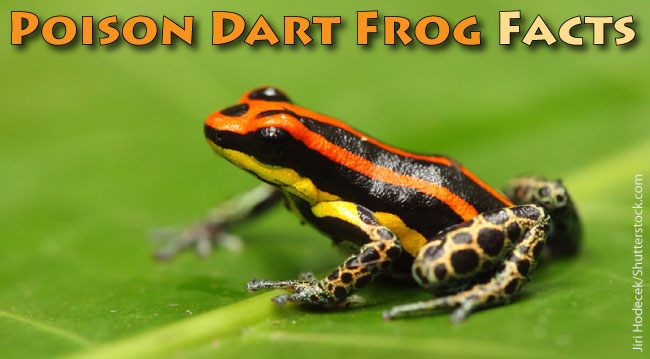 A creature’s size is not always an indicator of how dangerous it is. Poison dart frogs may be small, but they are among the most poisonous of all living creatures! This article contains many more poison dart frog facts, and is part of our Rainforest Animals series.

The poison dart frog is Native to Central and South American rainforests. There are nearly 200 species of poison dart frog, most of which are brightly colored. This coloration is not just for show: it warns potential predators that the frogs are poisonous.

Poison dart frogs range in size from .4-2.4 inches (1-6 cm) in length (the smallest are about the size of a thumbnail).

Just one lick of a poison dart frog could be fatal, and if the frog’s poison doesn’t kill the predator, it can cause nausea, swelling or paralysis. Any animal that survives the poison is unlikely to forget its effects – and will therefore avoid that species of frog in the future.

The deadliest poison comes from the feared golden poison dart frog. Found only in Colombia, South America, one frog carries enough poison to kill 10 grown men! It only takes two micrograms (.000002 of a gram) to kill one person.

The golden poison dart frog has the rather scary-sounding scientific name of Phyllobates terribilis.

How Poison Dart Frogs Got Their Name

Hunters capture poison dart frogs and use the frog’s poison on the tips of their blow darts.

After capturing the frogs, there are two ways in which the hunters extract the poison. Using the first method, the hunters hold the frog with a stick, which scares the animal into secreting the poison. The hunters then dip their darts into the secreted poison. The frogs are then released back into the forest.

Using the second method, they hold the frog over a fire, causing the frog to emit a yellow froth that the hunters rub their darts in. The hunters then drop the frog into the fire to die.

Poison dart frogs that are kept and fed in captivity are often not as poisonous as those that live in the wild. Scientists think that this is because the poison dart frogs don’t actually make their own poison, but that it comes from chemicals in the frog’s natural food.

When it’s time to mate, the male frog will call out to attract females. The female will approach and rub her nose on his. Then, they do a little dance with each other. After this, the male leads the female to a leafy place on the ground, where she will lay up to 40 eggs in a jello-like (gelatinous) substance and he will fertilize them.

The eggs need to stay moist, so the parents will take turns getting their own skin wet and sitting on the eggs, or they will urinate on the eggs. The eggs are non-poisonous, and in danger of being eaten by other frogs, birds, or other animals and insects. The male frog returns often to check on them.

After 2-4 weeks, the tadpoles hatch and swim up on the male frog’s back and head. He then carries them to their new home. This is often a plant with large, bowl-like leaves that can hold water.

In the video below, you can see a poison dart frog carrying its tadpoles.

Once the tadpoles are in the water, the female frog brings them unfertilized eggs to eat, and they also feed on the algae in the water. As tadpoles, the poison dart frogs’ colors are dull and at this stage they still aren’t poisonous. However, they grow up fast, and at 6-12 weeks they reach maturity, with their bright colors fully developed. Poison dart frogs can live up to six years in the wild.

We hope that you have enjoyed reading these poison dart frog facts. Learn about other rainforest animals here.