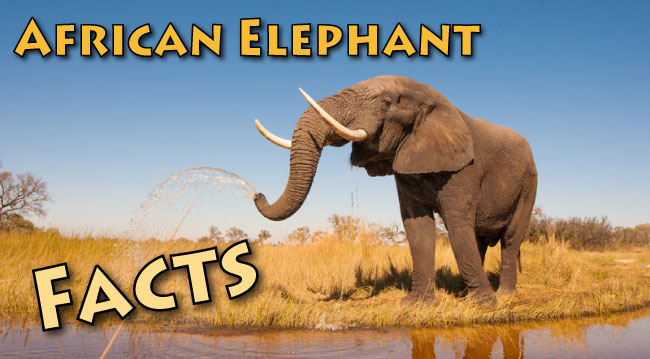 Want to learn more about the world’s largest land animals? This page contains African elephant facts and information. If you enjoy learning about this (usually) gentle giant, then visit our African Animals page and find out about more amazing animals.

African Elephants are the world’s largest land animal. These gentle giants can be distinguished from their Indian counterparts by their huge ears. African elephants can reach heights of 13 feet (4 meters)  at the shoulder. They can weigh as much as 14,000 pounds (6,350 kilograms).

Their huge ears help keep African elephants cool in the African sunshine by radiating heat. Perhaps the best known feature of elephants are their multi-functional long trunks, which can be used for smelling, breathing, trumpeting, drinking and grabbing things.

Both male and female African elephants have long upper incisor teeth which develop into ivory tusks which they can use to dig for food and water, and also strip bark from trees. Males will also use their tusks during fights with other males.

You can get an idea just how big and powerful African elephants are in the video below:

No big surprise, but African elephants can be found wandering their way through 37 African countries, particularly in sub-Saharan Africa and the rain forests of central and west Africa. A small population exist further north in the Sahel desert of Mali. Forest elephants are smaller than Savannah elephants and are uniquely adapted to the forest habitat found in the Congo Basin.

African elephants have a strong impact on the habitats they inhabit, and can help to make them suitable for other species. In the forests, it is estimated that 30% of tree species benefit from dispersal and germination via elephants.

What Do African Elephants Eat?

African elephants roam vast distances, foraging as they go. They eat fruit, grasses, bark and roots in huge quantities, consuming up to 300 pounds (136 kilograms) per day. They will also consume 30 to 50 gallons of water a day.

The African elephant population is estimated at around 470,000 individuals, however, numbers in the last century were estimated to be between 3 and 5 million. Elephant pregnancies are the longest of any mammals, a full 22 months. Females (cows) generally have a single calf every 2 to 4 years. At birth, baby elephants already measure 3 feet (1 meter) in height and weight a massive 200 pounds (91 kilograms).

Female and young elephants live and travel in groups called herds led by an older matriarch female, while males (bulls) are more likely to be found on their own, or in a loose ‘bachelor’ herd. In the wild,

African elephants are listed as vulnerable on the IUCN Red List. In the 1980s, intensive hunting resulted in the loss of up to 80% of some herds, and 100,000 elephants every year. The ivory trade is the biggest problem facing wild African elephants today. African elephant tusks are made of ivory and many have been killed illegally by poachers who want to sell the ivory.

Organisation such as the International Elephant Foundation have been set up to help save elephants.

Enjoyed these African elephant facts? Want to find out about some more awesome animals? Check out the Active Wild African Animals page.