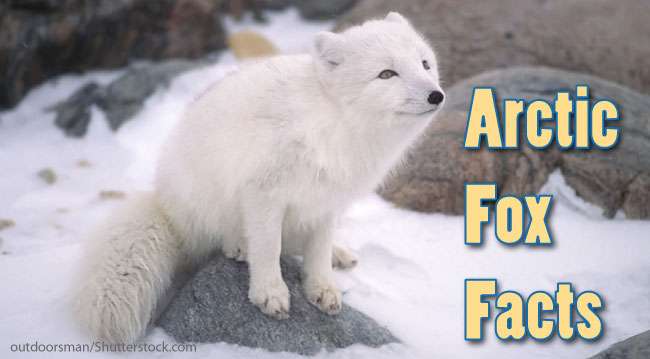 This page contains arctic fox facts and information. Find out more about this fascinating Arctic animal and the various adaptations that allow it to live in it a cold environment.

Standing at just over one foot tall, the Arctic fox may be a small mammal, but what it lacks in size it makes up for in survival skills! It is an extremely hardy animal, and has adapted well to the Arctic tundra it calls home.

Where Do Arctic Foxes Live?

Arctic foxes can be found in Alaska, Canada, Russia, Greenland and Iceland and other Arctic locations.

Unlike some other mammals that live in cold climates, the Arctic fox doesn’t hibernate in the winter. Arctic foxes are active throughout the year. Extreme weather conditions in an environment with limited food resources doesn’t stop these hardy little animals!

With temperatures in the Arctic tundra averaging -18°F in the winter and 37°F in the summer, it’s no surprise that the Arctic fox has a number of adaptations to enable it to live and function in very cold weather.

The arctic fox has a thick, multi-layered fur coat that provides excellent insulation against the cold. Arctic foxes even have fur on their paws so they can walk on snow and ice without getting cold! They use their thick tails not only to balance but also as a shelter against the freezing wind.

The Arctic fox’s fur changes colour with the seasons, providing it with year-round camouflage. In the summer its coat is a brown-grey colour. This hides the animal against the rocky ground. In the winter its coat changes to a white colour for when the ground is covered in snow.

Under its fur, the arctic fox has a lot of body fat, which helps to keep it insulated in the cold. In the autumn, arctic foxes increase their fat reserves to provide energy and insulation through the winter.

Arctic foxes have excellent hearing, which comes in handy when locating small animals under the snow.

Arctic foxes mate for life, and parents stay together during the breeding season. The mother gives birth to a litter of around 5 – 8 pups. Both parents are involved in looking after their young.

Artic foxes live in burrows. Adult Arctic foxes raise their pups in these underground dens, which are often a network of tunnels covering an area the size of a football field!

What Do Arctic Foxes Eat?

Lemmings are an important prey animal for Arctic foxes. Arctic fox numbers rise and fall in relation to the size of the local lemming population. Artic foxes eat a wide range of other small animals, including arctic hares, birds (and bird eggs), rodents, fish and seals.

The Arctic fox is an omnivore, which means it eats plants as well animals. The Arctic fox will eat berries, seaweed and other plants.

When food is scarce, Arctic foxes exhibit great resourcefulness by following polar bears and eating scraps of food left behind by the bigger animals!

Watch the video below to see arctic foxes doing just this (warning: may not be suitable for younger viewers!)

The Arctic fox’s main predator is the wolf, which will dig into Arctic fox dens looking for pups. Arctic foxes living in relatively warmer parts of the Arctic tundra run the risk of being preyed upon by the red fox – which is better suited for living in warmer climates than the Arctic fox.

When food is scarce, polar bears may also prey on Arctic foxes. Life can be tough when you’re not at the top of the food chain!