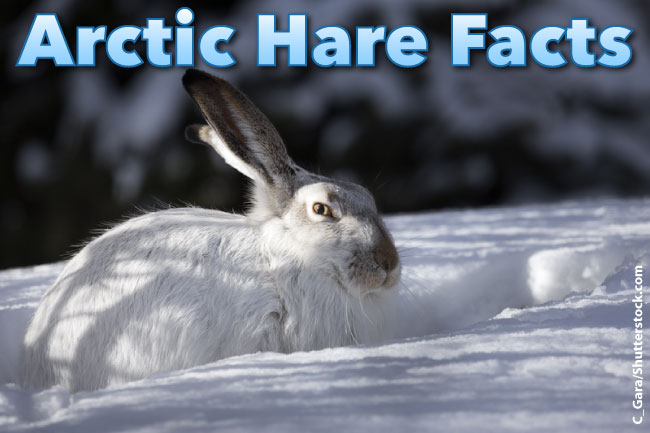 This page contains Arctic Hare facts for kids and adults, and is part of our Arctic Animals series.

The Arctic Hare is a hardy animal that lives in cold, inhospitable Artic lands. It relies on its thick coat both to keep warm and for camouflage. It is capable of running at high speeds to escape from predators.

Make sure you watch the amazing video of an Arctic Hare being chased by a pack of Arctic Wolves. You’ll get to see the Arctic Hare’s incredible speed – but is it fast enough?

The Arctic Hare’s scientific name is Lepus arcticus. It is a member of the Leporidae family, which includes all hares and rabbits.

There are over thirty species of hare, and they are found on several continents, including Europe, North America, and Africa.

The Arctic Hare is a cold weather specialist. It is the biggest species of hare, and has a thick white coat that conserves heat and provides camouflage.

The Arctic Hare has thick grey hair on its chest and undersides. The rest of its coat changes colour with the seasons. In winter its soft, long coat is pure white, and in summer it is grey, or grey-brown. Arctic Hares that live in northern regions stay white all year round.

Where Do Arctic Hares Live?

The Arctic Hare lives within the Arctic Circle, in the far northern parts of Canada (including Baffin Island, Ellesmere Island and other Arctic Islands) and Greenland. It is also found further south, on the Canadian island of Newfoundland, which is part of the province of Newfoundland and Labrador.

The Arctic Hare lives in areas where it is too cold for trees to grow. This open, bare terrain is called tundra. The Arctic tundra in which the Arctic Hare is found has soil than is permanently frozen. The vegetation consists of moss, small shrubs and lichen.

Arctic Hares dig holes in the ground or in the snow in which they can shelter and sleep.

Arctic Hares are herbivores. They eat the leaves of the various shrubs that manage to grow in this harsh environment. The Dwarf Willow – a tiny, woody plant that has adapted to Arctic environments – forms 95% of their diet. Arctic Hares also eat mosses, lichens and even carrion such as fish and caribou.

Artic Hares are usually solitary animals, but at times can be found huddled in large groups of several hundred.

Baby and young hares up to a year old are called leverets. Female Arctic Hares give birth to one litter in spring or early summer. There are between 2 and 8 leverets per litter.

Arctic hare leverets are born with hair and are able to see. They stay close to their mothers until able to fend for themselves, but even after a few days they can evade danger by hiding or by remaining motionless.

The young hares reach adulthood quickly, and are able to breed themselves in a year.

Arctic Hares are not endangered, and are rated ‘Of Least Concern’ on the IUCN Red List.

However, it’s not easy being an Arctic Hare! As well as having to cope with the harsh Arctic conditions, they also have a number of predators.

Mammals such as Arctic wolves, Arctic foxes and ermines, as well as birds such as Gyrfalcons, Peregrine falcons and Snowy owls will all prey on Arctic Hares.

The Arctic Hare’s main defence strategies are camouflage and speed. The hare’s white or grey coat hides it against the snow and rocks. If spotted, the Arctic Hare can run at speeds of up to 40 mph (64 km/h).

Hares vs Rabbits vs Rodents: The Scientific Stuff

Hares are in the same animal family as rabbits. This family is called Leporidae, and members of this family are called leporids.

Hares are generally bigger than rabbits and have longer ears. Unlike rabbits, hares don’t live in warrens. Because of this the baby hare has to be better able to fend for itself as soon as it is born. Whereas rabbit babies are born blind and hairless, baby can see and have hair.

Hares aren’t rodents, but they’re quite similar animals. Hares and rabbits, together with Pikas (small mammals that live in mountainous regions) are Lagomorphs: members of the order Lagomorpha. (An ‘order’ is a larger scientific grouping of animals which can often contain several animal families).

Lagomorphs shave several characteristics with members of the Rodentia order (rodents). The main one is that they all have incisors (cutting teeth at the front of the jaw) that never stop growing. This is important because these animals do such a lot of biting and gnawing that their teeth would soon wear down if they weren’t continually growing.

Hares, rabbits and pikas all have four incisors, whereas rodents only have two.

Hares Eat Their Own Poop!

Yes, you heard that right: hares (and rabbits and pikas) eat their own poop! But don’t worry, it’s not as gross as it sounds! These animals eat a lot of tough food. It’s difficult stuff to digest. The easily digested food passes through the hare quickly, and makes dry, pellet-like, droppings.

Food that is harder to digest remains in a special pouch in the hare’s stomach. Here, it is broken down by bacteria before passing out of the hare as a different type of dropping. These are softer and moist. Immediately after passing these, the hare eats them up. This time the food, which has already been broken down inside the hare, is easily digested. The hare now benefits from all of the goodness contained in the food.

Find the top Arctic Hare facts for kids below:

We Hope that you have enjoyed learning all about Artic Hares. Just imagine what life must be like on the frozen Arctic tundra. Arctic Hares are seriously tough animals!

You can find out more about all kinds of amazing Arctic animals here: Arctic Animals.