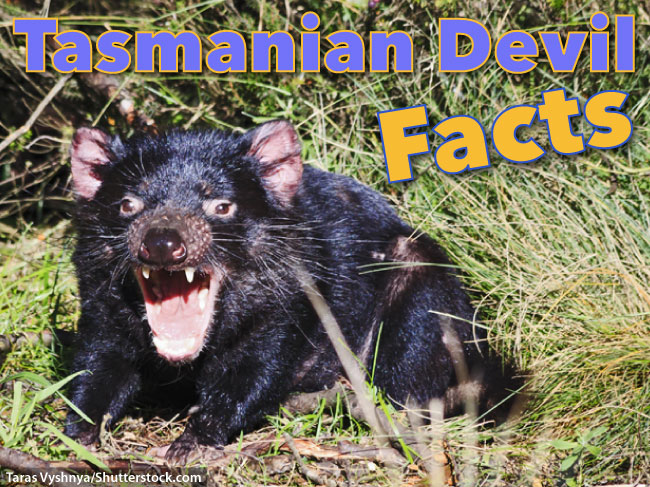 This page contains Tasmanian Devil facts for kids and adults and is part of our Australian Animals series. Read on to find out about this fierce little marsupial.

A quick list of Tasmanian Devil facts for kids can be found at the end of the article.

It’s the middle of the night. You’re camping in a Tasmanian forest. Suddenly, you hear blood-curdling screams coming from the darkness. What could possibly be making that terrible sound?

Don’t worry, it’s not a monster, and it’s not dangerous (to humans, at least). In fact the creature responsible for the screaming – the Tasmanian Devil – has got problems of its own at the moment. In 2008, the Tasmanian Devil became listed as an endangered animal on the IUCN Red List. We’ll find out more about this further down the page.

The Tasmanian Devil is a carnivorous marsupial. It is famous for its loud screams and fearsome nature. Thousands of years ago it was found on mainland Australia, but today it’s only found in the Australian island state of Tasmania.

This tough little creature is about the size of a small dog. Being a marsupial, the female Tasmanian Devil carries her young in a pouch.

Tasmanian Devils are also known as ‘Tassie Devils’ or just ‘Devils’. They get their name from their scary screams and aggressive behaviour.

You can see what a Tasmanian Devil looks like in the video below. You can also hear its screams!

The Tasmanian Devil is a strong, barrel-shaped creature. It looks like a miniature bear, or a short-nosed dog. It has a large head with powerful jaws and sharp teeth. Its fur is thick and black, and most (but not all) Tasmanian Devils have a white stripe running across their chests.

Tasmanian Devils are nocturnal. They sleep during the day and only come out at dusk. Although they are solitary creatures (they live alone, rather than in packs), Tasmanian Devils often come together when feeding. This is when they scream at each other and fight for their share of the food.

Despite their bulky looks, Tasmanian Devils are good runners. Scientists think that they did more hunting before cars were introduced. This is because nowadays animals that have been knocked down by cars provide a lot of the Tasmanian Devil’s food.

Tasmanian Devils have incredibly strong jaws. In proportion to their body weight, they have the strongest bite of any living animal. Thanks to their powerful jaws and large, sharp teeth, Tassie Devils eat nearly all of their prey, even the bones.

Where Do Tasmanian Devils Live?

Several thousand years ago, Tasmanian Devils were found on mainland Australia, too. It is not known exactly why they became extinct on the mainland. Some theories suggest that it was caused by the spread of people, others say it was the arrival of the dingo.

The Tasmanian Devil is currently threatened by a disease known as Devil Facial Tumour Disease (DFTD). Due to the spread of the disease, the Tasmanian devil’s conservation status is ‘Endangered’.

The disease was only discovered in 1996, but has had a drastic effect on the Tasmanian Devil population.

Scientists estimate that the number of Tasmanian Devils in the wild may have declined by 20 – 50 percent due to the disease.

Some local populations have decreased by as much as 90%. The disease is now present in over 60% of the Tasmanian Devil’s range.

The Tasmanian Devil is in danger of becoming extinct in the wild due to DFTD.

DFTD causes ugly sores to grow on the Tasmanian Devil’s face. These sores grow so large that the animal cannot eat. The growths also spread to other parts of the animal’s body.

The disease is spread by biting, and may also be spread in food that an infected Tasmanian Devil has touched. Because biting and fighting over food is a common aspect of Tasmanian Devil behaviour, the disease spreads quickly.

How To Save The Tasmanian Devil

There are several schemes to save the Tasmanian Devil in operation. These include:

You can find out more about the disease, and the steps being taken to prevent its spread, at the Save The Tasmanian Devil Program’s official website.