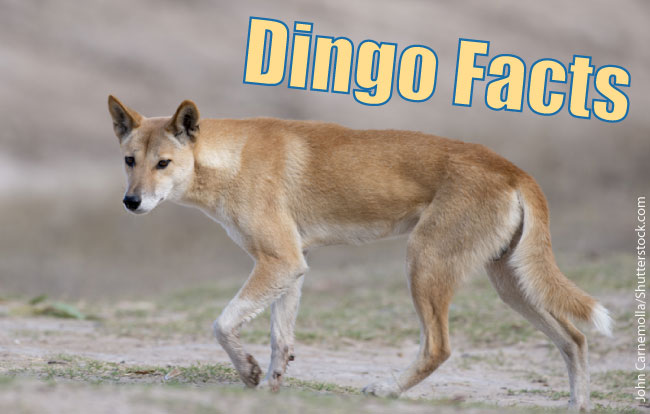 Did you know that the dingo is a subspecies of the grey wolf? This page contains dingo facts and information, and is part of our Australian Animals series. Read on to learn more about this awesome Aussie apex predator…

The dingo (also called a warrigal) is a wild dog that lives in Australia. Although dingoes look similar to regular, medium-sized, bushy-tailed dogs, they are different in three interesting ways: 1) They have stronger jaws and sharper teeth, 2) They don’t bark; instead, they howl to communicate, and 3) They are able to rotate their wrists and turn their heads 180 degrees. Let’s take a closer look at this tough canine …

It is thought that dingoes were brought to Australia by Asian travellers around 4,000 years ago. Although there are still dingoes in Asia, they are primarily associated with Australia.

Dingoes can be found in every state in mainland Australia (they are not present in Tasmania). Dingo habitat includes grasslands, rainforest, desert, mountains, and woodlands, but they are most commonly found in the Outback: a dry inland area where very few people live.

The dingo usually has golden or reddish fur, but sometimes you will find one that is brown or black. Other differences, such as length of fur and ears are present between dingoes. Their ears always stick up.

Dingoes live together in packs of up to twelve dogs, with a male and female who lead the others.

To communicate, dingoes will howl to each other and leave scent markers, which protect their territory and aid in the mating process.

Baby dingoes are called pups. The female gives birth to 5-10 pups once a year in a den made in a cave or under a hollow log. The pups stay with their mother until they are six to eight months old. The pack all work together to protect the pups. However, the dominant female will often kill the pups of other female dingoes in the pack, so only hers will survive.

The dingo is a member of the dog family, Canidae.

The domestic dog is another grey wolf subspecies.

Animal subspecies can interbreed (i.e. a wolf and a dingo could have pups), but generally don’t, because they are separated geographically.

Closely related to dingoes are New Guinea singing dogs. These animals share many physical characteristics with dingoes, notably the sounds that they make, their colour, size and flexible limbs. Most scientists group both types of dog under the scientific name Canis lupus dingo.

The video below shows some domesticated dingoes displaying their natural digging behaviour.

What Do Dingoes Eat?

Unlike the Asian dingoes, which are mostly vegetarian, Australian dingoes are terrific hunters, preying on animals such as rabbits, lizard, geese, wallabies, and even kangaroos! For smaller animals, dingoes hunt alone, usually at night, but for larger prey, they will hunt in packs.

Dingoes became so well-known for hunting and eating sheep and other farm animals that in the 1880’s it was decided to build a huge fence to keep dingoes out of the south-east of Australia.

Australia is a very big country, and to completely fence off a sizeable part of it was a huge undertaking. The dingo fence was completed in the 1920’s, and, at 3488 miles long, is the longest fence in the world.

Dingoes are apex predators; this means they do not have any natural predators. They may occasionally be eaten by crocodiles, killed by other dingoes or dogs, or be shot at by farmers and ranchers, but otherwise they are pretty hardy!

The only real threat to the dingo is the domestic dog. Because dingoes are able to breed with other dogs they are in danger of becoming extinct as a pure species.

Several schemes have been set up to protect dingoes. This dingo sanctuary is one of them.

People who care about the future of the dingo are looking for safe places in the wild, away from sheep and domestic dogs, to protect the dingo species. Although they are fierce, they are a necessary part of the ecosystem, curbing populations of wild rabbits, pigs, and cats, feral dogs, and kangaroos.

We hope that you have enjoyed reading these dingo facts.

You can discover more awesome Australian animals on this page: Australian Animals List with Pictures & Facts