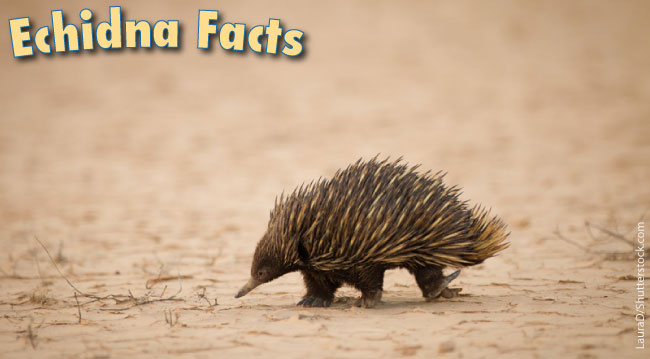 The echidna is a spiny, ant-eating animal that lives in Australia and New Guinea. What makes echidnas really special is that they are egg-laying mammals! This page contains information on the echidna and a list of echidna facts for kids.

This article is part of the Active Wild Australian Animals series.

The echidna (ih-kid-nuh) is a native of Australia and New Guinea. With its spiny back and long, pointy snout, one might mistake it for a porcupine or a hedgehog, but in fact it is related to neither.

The echidna belongs to the Tachiglossidae family, which is Greek for “fast tongue.” This is fitting because the echidna uses that long beak and sticky tongue to slurp up its favorite food: ants! In fact, the echidna’s nickname is ‘spiny anteater’.

Echidnas Lay Eggs! How Can They Be Mammals?

Echidnas are curious creatures. In many ways they don’t look much like mammals: they have spines, and they lay eggs.

Despite this, echidnas do possess the characteristics necessary to be classified as mammals. They have fur (their spines are actually stiff hairs), they are warm-blooded, and they produce milk for their young.

But what about the eggs?

This is what makes echidnas special. They are monotremes: egg-laying mammals.

The only other egg-laying mammal is the platypus. The four echidna species and the platypus are the only monotremes still in existence.

You can watch the video below to get a better idea of what an echidna looks like, how it moves, and how big it is:

Echidnas mate during the winter months of July through August. When the female echidna produces an egg, she curls up, causing the leathery egg to drop into the soft folds of her stomach, which make a pouch. After ten days, the egg hatches, and a baby echidna, called a puggle, is born! It has no spines or fur.

The puggle lives in its mother’s pouch, much like a kangaroo with her joey, until is two months old. During this time, the puggle sucks the milk from its mother’s pores that drips onto the hairs in her pouch. The mother then hides the puggle safely in a burrow, visiting once a week to feed her baby. At seven months old, the young echidna has developed enough to live on its own.

The short-beaked echidna lives in both Australia and New Guinea and is the most populous echidna species. You can find it in the lowlands, the desert, and the highland forests.

Although the echidna is a warm-blooded mammal, it cannot tolerate either very cold or very hot temperatures. If you are able to spot one at all, it will likely be early in the morning or at night during the summer, or at noon in the winter.

There are three species of long-beaked echidna; all live in New Guinea. Little is known about them because they live high up in the mountain forests where observing them is difficult.

Echidnas are solitary creatures, and they make their home in various places within their territory. One day, they might live in a burrow (nest in the ground), the next in a hollow log, and at other times in a cave or some underbrush.

Echidnas are good swimmers, but they don’t like the rain and will hide from it for days if necessary. Luckily, echidnas don’t need to eat very often; one huge meal will tide them over for several days. A termite infested log is the perfect feast!

If it senses danger, the shy echidna has a few ways to protect itself. First, its brown or black color provides camouflage to keep it out of danger in the first place. Second, when it is on hard ground, it may curl up into a ball, exposing only its spines and keeping its spineless stomach and snout protected. But, if it is on soft ground, it does something really cool. With its short muscular front and hind legs and sharp claws, the echidna digs away at the ground and sinks right down into it, leaving only its spines out for protection against a predator. Finally, the echidna is also able to wedge itself in rock crevices with its strong body, making it impossible for predators to pull it out.

The only animals fierce enough to tackle an echidna are the dingo (a wild dog), the goanna (a large lizard), wild cats and foxes. Snakes will also sneak in and eat puggles.

The echidna is a fascinating creature: a unique blend of mammal, reptile, and marsupial. If you are lucky enough to find one, remember to respect its privacy and keep your hands away from those sharp spines!

We hope that you have enjoyed reading these echidna facts. It’s always sad to learn that a cool animal like the echidna is endangered, so spread the word and tell everyone you know about echidnas!

You can discover more awesome Australian animals on this page: Australian Animals List with Pictures & Facts