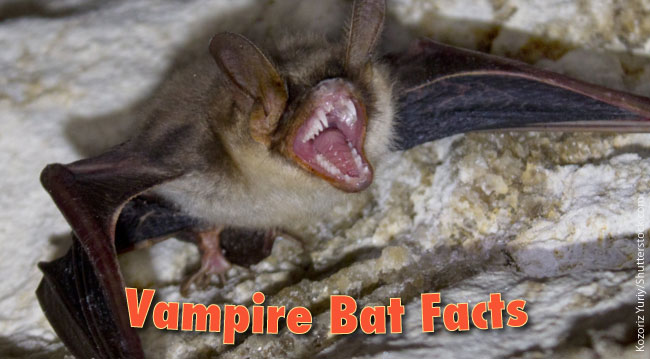 The eating habits of the blood-sucking vampire bat have caused it to become famous in folklore and legends. Here, as part of our Rainforest Animals section, we’ll be separating vampire bat facts from the myths.

Read on for an in-depth look at these fascinating mammals. (Don’t watch the video if you’re squeamish!)

Where Do Vampire Bats Live?

The three true vampire bats live in the New World, ranging from Mexico southwards to Brazil, Chile and Argentina.

Vampire bats live in a wide range of habitats from arid to humid, and tropical to subtropical areas.

Vampire bats live in colonies, forming roosts in dark places which are warm and humid such as caves, hollow trees and old buildings.

Vampire bats usually hunt alone at night. During the day they return to their colonies, which are formed of around 100 individuals.

How To Recognise A Vampire Bat

The common vampire bat has short fur which is silvery grey on the underneath but much darker on the back. They average about 3.5 in (9 cm) long, have a wingspan of 7 in (18 cm) and usually weigh about 2 oz (57 grams), but they can double their weight after a single feeding!

Females are usually larger than males. To enable them to feed from animals, vampire bats have short, flat muzzles rather than the long muzzles of fruit eating bats. The nose has naked pads with U-shaped grooves at the tip.

Most bats are unable to move about on the ground, but vampire bats are an exception – they can walk and run using a bounding gait in which the forelimbs (wings) are used instead of the hind limbs to propel them forward.

Common vampire bats have good eyesight and well-developed senses of smell and hearing. They also use echolocation to tell how near or far objects are from them.

Echolocation is a process in which the bat emits sounds from its mouth and listens to the sound rebounding off of its surroundings. From this, the bat can tell how near or far it is to objects in its vicinity.

The video below shows just how well-adapted vampire bats are, and also contains some interesting vampire bat facts. Warning: not for the squeamish!

What Do Vampire Bats Eat?

Vampire bats eat blood – a behaviour known as ‘haematophagy’ or sometimes ‘sanguivory’. Common vampire bats are nocturnal and hunt for their prey using olfaction and echolocation; they feed mainly from livestock. When they have found their prey, they either land on it directly, or on the ground nearby and then leap onto the animal.

Vampire bats use heat sensors in their nose to detect a site where the blood is close to the surface, then pierce the animal’s skin with their teeth and peel away a small flap. Their saliva contains a substance which stops the blood clotting, allowing them to lap at the blood. The bats feed for about 30 minutes and drink so much blood they can barely fly. They mark the animal with urine and will often return to the same animal on several consecutive nights.

The most common victims of vampire bats are sleeping cattle, horses, pigs and birds, but they have been known to feed on humans.

One of the least-known aspects of vampire bat behaviour is that they share food with one another. When a bat is unsuccessful in feeding during the night, it begs for food from a roost-mate, which then regurgitates blood to feed its neighbour. This behaviour likely evolved because vampire bats cannot survive more than 3 nights without feeding.

Vampire bats are not seasonal breeders and can mate all year round. They are pregnant for 3 – 4 months, which is a long gestation period compared to other small bats. The female gives birth to a single baby.

Young vampire bats feed on milk from the mother, not on blood. They cling tightly to their mothers, even in flight, until they are weaned at about 3 – 4 months.

Female vampire bats display a rare behaviour called “alloparenting” in which females will feed young bats whose mothers have died, as well as those whose mothers are still alive.

Vampire bats can live for up to 12 years in the wild, although captive individuals have been known to live for 19 years.

We hope that you enjoyed these vampire bat facts. You can discover more amazing rainforest animals on this page: Rainforest Animals List with Pictures & Facts

Many of the world’s bats are in danger. The Bat Conservation Trust helps bat conservation work in the UK. Is there a similar society in your country?