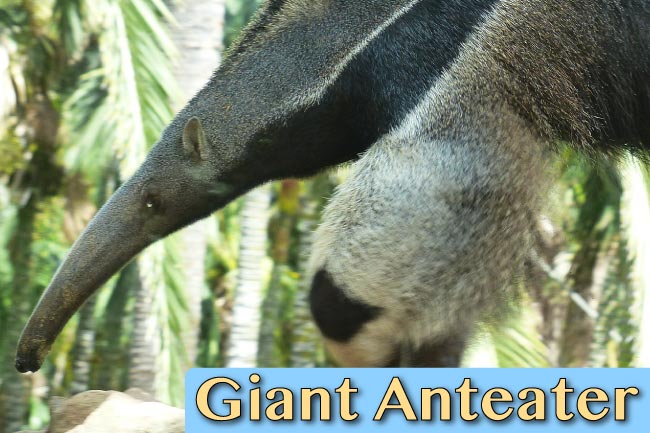 Giant anteater facts, pictures and information. Meet an amazing South American mammal that likes nothing more than eating thousands … and thousands … of ants!

Be sure to watch the video of giant anteaters at San Diego Zoo!

Giant Anteater Facts At A Glance

The giant anteater is a large mammal of Central and South America. It is a specialized insectivore (insect eater). It is easily identified by its long, thin snout, grey/black coat, and bushy tail.

The giant anteater’s coat is long and coarse. Mostly grey in color, it is marked on either side with a triangular black patch that rises from the animal’s throat to its shoulders. This dark patch is lined with white strips.

The giant anteater’s forelimbs are grey-white and marked with black ‘collars’ around the ankles. The anteater’s sides and hind limbs are dark grey, and its tail is brown and bushy.

Four of the toes on each of the front feet are equipped with long, powerful claws. These are used to break into ant mounds. They also make excellent defensive weapons – a cornered giant anteater can be dangerous!

The giant anteater’s long, thin snout is around 30 cm (12 in) in length. The species has no teeth, and its sticky tongue can be up to 60 cm (24 in) in length. Its eyes and ears are relatively small.

Male giant anteaters are larger than females, but despite the difference in size, the sexes are difficult to tell apart in the field.

Get to know these awesome animals by watching this video of giant anteaters at San Diego Zoo:

There are four living species of anteater:

As its name suggests, the giant anteater is the largest of the four anteaters.

All four anteaters belong to the order Pilosa (the same order as sloths). The anteaters are the only members of the suborder Vermilingua, which means ‘worm tongue’. The scientific name comes from the species’ long, worm-like tongues, which are used to collect ants.

Want to know more about animal ‘orders’ and ‘families’? Check out our Animal Classification page.

The giant anteater’s scientific name, Myrmecophaga tridactyla, means ‘anteater with 3 fingers’ … which is strange, considering it actually has 5 ‘fingers’ on each foot!

Where Does The Giant Anteater Live?

The giant anteater is native to Central and South America. Its distribution range covers a large area from Honduras to northern Argentina.

The giant anteater is fairly adaptable and able to inhabit a variety of habitats, provided that there is enough food. Habitats in which the giant anteater can be found include: tropical rainforest, deciduous woodland, open grassland and even timber plantations.

Giant anteaters typically search for food in open areas, and rest in areas with tree cover.

Male anteaters may engage in aggressive encounters, which involve bellowing, chasing and fighting. Females appear to be more tolerant of each other.

Depending on the region, giant anteaters may be active either at night or at day. The giant anteater spends much of its time resting (up to 16 hours per day), curled up either in dense vegetation or in a shallow cavity in the ground. When resting, it covers its body with its tail, which provides both warmth and camouflage.

Of the four anteater species, the giant anteater spends the most time on the ground. It walks on all fours, and uses the knuckles of its front paws. This protects the fearsome front claws, which are folded behind the paw when not in use.

It’s thought that the giant anteater moves slowly in order to conserve energy. The species is also able to swim and climb.

Although the giant anteater may mate at any time of the year, couplings typically occur in March and May. The pair only stays together for a couple of days. The female gives birth to a single pup after a gestation period of around 190 days.

The pups communicate with their mother using sharp whistling noises. They often travel on their mother’s back. The coat patterns of the pup and mother align, which helps to camouflage the young and makes the mother appear larger.

The young start eating solid food after 3 months and are fully weaned after around 10 months. By 2 years of age they are fully grown and ready to leave their mother.

What Do Giant Anteaters Eat?

The giant anteater is an insectivore. Its diet mainly comprises ants and termites. Occasionally it will also feed on the larvae of beetles or honey bees and sometimes even licks fallen fruit.

The giant anteater has poor eyesight and relies on its keen sense of smell to track its prey. After finding a nest, it uses its long, powerful claws to rip the mound open. The anteater then brings its long tongue into use, mopping up insects in their dozens.

The species has no teeth and its small mouth is only large enough for its tongue to move in and out of. The tongue is covered in tiny spines and coated in sticky saliva. The anteater can flick it in and out at a speed of almost 3 times per second.

The giant anteater swallows at a higher rate than most other mammals, and has a modified stomach with hardened folds that crush the insects. The digestion process is further aided by formic acid from the insects and small quantities of sand which are swallowed with the food.

To compensate for the low nutrient content of its prey, the anteater consumes them in large quantities, raiding up to 200 nests and eating up to 30,000 insects in a day.

The giant anteater is vulnerable to predation by the jaguar (Panthera onca) and the puma (Felis concolor). If cornered by a predator, the giant anteater will use its sharp claws to defend itself. Cornered giant anteaters have been known to seriously injure humans.

Is The Giant Anteater Endangered?

The giant anteater is rated ‘Vulnerable‘ by the IUCN. Although widespread, the species has become scarce and even locally extinct in some areas. The decline is particularly noticeable in Central America, where the giant anteater is now considered to be the region’s most threatened mammal.

The giant anteater population underwent an estimated decline of 30% between 2000 and 2010. The species’ specialized diet, large size, and low productive rate are all though to play a part in this.

The giant anteater is threatened by: