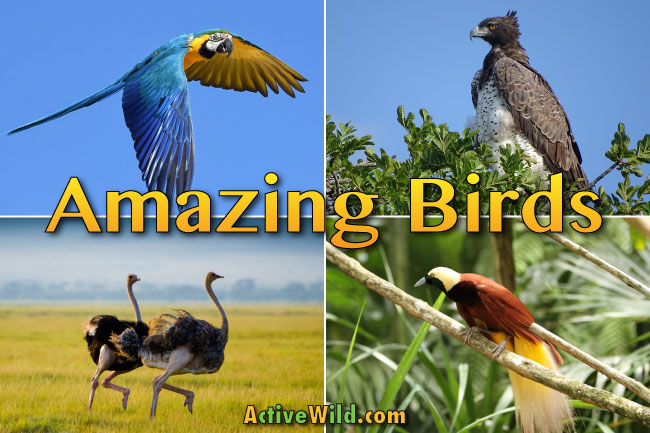 In this amazing birds list, you’ll meet some of the most incredible members of the bird world.

From birds that travel tens of thousands of miles in a single year, to birds that build huge nests; this list contains many of the most noteworthy members of the order Aves.

We start this list of amazing birds with the albatrosses. Albatrosses are several species of large seabirds found mainly in the Southern Hemisphere. Their long, thin wings allow them to cover immense distances over the ocean while expending very little energy.

The wingspan of the wandering albatross can reach an incredible 3.7 m (12 ft. 2 in): the longest wingspan of any bird. Individuals have been known to fly around the entire Southern portion of the world three times in a year.

The Arctic tern is another well-traveled seabird. This amazing bird migrates further than any other animal. Its incredible yearly journey takes it all the way from its Arctic breeding grounds to Antarctica … and back again. Some Arctic terns travel 90,000 km (56,000 mi) in a year!

Arctic terns see two summers every year: one in the Arctic and another in the Antarctic. They also experience more daylight than any other animal.

Bowerbirds are among the bird world’s greatest builders. However, they don’t use their expertise to build nests; instead, male bowerbirds build incredible structures – known as bowers – in order to impress females.

Bowers are built from grass and sticks, and are often decorated with brightly-colored objects such as shells, feathers and berries. Even man-made objects can find their way into a bower.

Cassowaries – Among The World’s Largest Birds

Common Poorwill – The Only Bird That Hibernates 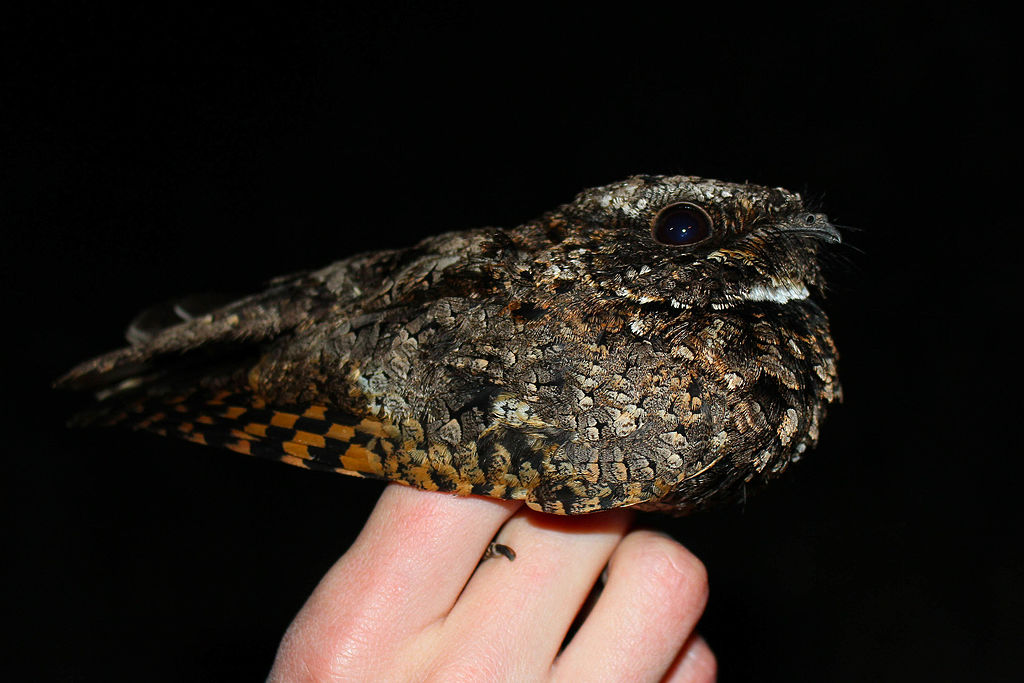 The common poorwill is a nocturnal bird found in North America. What makes it amazing is that it is the only bird to enter an extended state of torpor similar to hibernation.

During the winter months, the common poorwill will hide itself away in a pile of rocks and become inactive for weeks or months. While in this state of torpor, the bird’s metabolism and body temperature are both reduced.

Condors are large, majestic birds found in the New World. Using their huge wings, they soar over their mountainous habitats in search of carrion.

Despite being members of the family Cathartidae (the New World vulture family) condors don’t seem to have acquired the somewhat negative reputation of their cousins.

There are two species of condor: the Andean condor and the California condor. The Andean condor is one of the world’s largest flying birds, with a wingspan that reaches 3.5 m (11 ft 6 in).

Cranes are large, long-legged birds. They are found on every continent except South America and Antarctica.

The fifteen species of crane hold a number of record breakers. The sandhill crane is the world’s longest surviving bird species, having been around for at least nine million years. A Siberian crane reached the age of 83 – the oldest-known age of any bird.

The sarus crane is the tallest flying bird, while the Eurasian crane is one of the highest-flying birds, having been recorded at altitudes of up to 33,000 ft. (10,000 m).

Crows are among the world’s most intelligent animals. Feats demonstrated by various species of crow include: tool use, tool construction, food caching, using bread crumbs as fishing bait, and being able to distinguish individual humans. 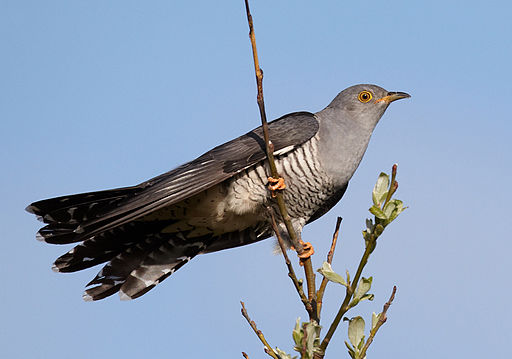 Most species in the cuckoo family Cuculidae raise their own young. However, the family’s reputation is tarnished by the 50 or 60 species that rely on a breeding strategy known as brood parasitism.

Brood parasitism involves the female cuckoo secretly laying her egg in the nest of another species. The cuckoo chick hatches sooner and grows faster than the chicks of the unwitting host bird. The young cuckoo will often push the other eggs or chicks out of the nest, thereby ensuring that it receives the lion’s share of any food its foster parents may bring.

Eagles – Majestic Hunters of the Skies

Eagles are some of the largest, most powerful birds of prey; only vultures are larger. Eagles are the ‘big cats’ of the air – supreme hunters who are not only strong and fast, but who are also equipped with acute senses and deadly weapons in the shape of a strong hooked bill and powerful talons.

Three species vie for the title of ‘world’s largest eagle’: Steller’s sea eagle is the heaviest; the Philippine eagle is the longest and has the largest wingspan; the harpy eagle is a similar weight and length but being a forest bird has a smaller wingspan.

Emperor Penguin – Among The World’s Most Dedicated Fathers

All penguins deserve to be included in a list of amazing birds: although flightless and ungainly on land, in the water they are incredibly fast and graceful.

The emperor penguin is an amazing animal in a number of ways. It the largest penguin, and the only one that breeds in the Antarctic winter. The emperor penguin’s single egg is incubated by the male, who keeps it warm on his feet while being battered by fierce Antarctic storms.

Hoatzin – Clawed Relic of The Past

The hoatzin is the last in a line of birds that branched off on its own 64 million years ago. A hoatzin chick has two primitive claws on each of its wings. These claws enable the young bird to climb up trees, and are lost when the bird is able to fly.

Although pigeons are often seen as pests, they are capable of some amazing feats. Homing pigeons can find their way home after being released over 1,000 miles away. They are able to accomplish this feat even having no prior knowledge of the area.

Scientists still don’t fully understand how homing pigeons navigate, but it is known that the birds can use magnetism, the position of the sun, and the sense of smell to reach their destination.

The house sparrow is a familiar bird in many parts of the world, and one of the most common of all wild birds.

An adaptable species, the house sparrow is able to live alongside humans, and has been introduced to many parts of the world by humans. It is the most widely distributed of all wild birds.

Hummingbirds are a family of birds quite unlike any other. Physically they are very small – the world’s smallest bird is the tiny bee hummingbird.

Hummingbirds have uniquely-structured wings that allow them to hover, as well as move forwards, backwards and sideways. No other bird is this maneuverable.

This form of flight requires a high level of energy, which hummingbirds obtain from nectar – a sugary substance produced by plants. Hummingbirds burn through a lot of energy, and have the highest metabolisms of all animals. Hummingbirds also have the world’s largest flight muscles – in proportion to body size – of any bird.

The ostrich is an amazing bird in many ways. This huge flightless bird is the world’s largest bird, the world’s fastest bird on land, and it lays the biggest eggs of any bird.

Parrots are tropical and subtropical birds known for their brightly-colored plumage and ability to mimic sounds, including human words.

It’s not just the parrots’ colorful feathers that make them amazing; parrots are also some of the world’s most intelligent birds. Studies have shown that not only do they mimic the sound of human words, but that they also understand the meaning of the words. Some parrots are able to use tools and to solve puzzles.

Male peacocks are famous for their brightly-colored, iridescent tail feathers. When raised, they create one of nature’s most impressive visual displays. Of course, like everything in nature there’s a reason behind this spectacle; the male peacock hopes that his amazing feathers will help him to attract females by demonstrating how healthy he is.

The peregrine falcon isn’t just the fastest bird in the world, it’s also the fastest species in the entire animal kingdom. When diving, it can reach speeds of over 200 mph (320 km/h).

Once a bird of coastal cliffs and rocky mountainsides, the peregrine has recently begun to inhabit towns and cities. Here, feral pigeons provide it with a plentiful food supply.

Superb Lyrebird – One Of the World’s Best Natural Mimics

If you’re walking in an Australian forest and you hear a car alarm, don’t worry; you haven’t stumbled across a crime scene. The source of the sound may well be a superb lyrebird – one of nature’s very best impressionists. This amazing bird can accurately mimic a huge range of sounds, both natural and man-made. 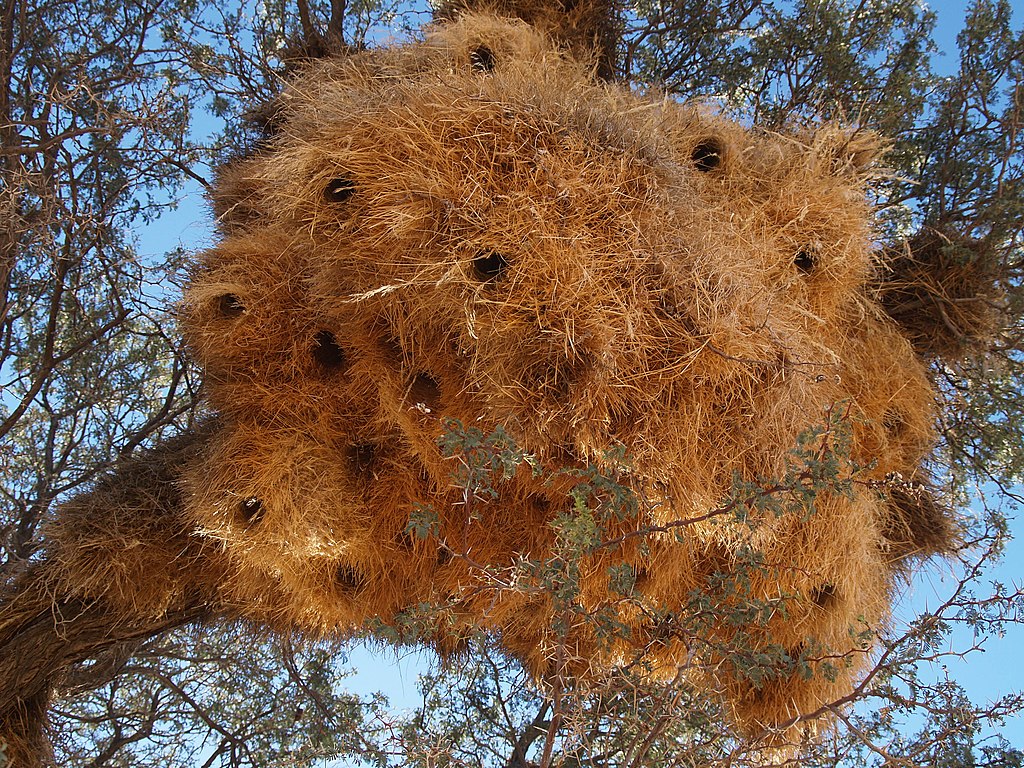 The sociable weaver is a small, brown, sparrow-like bird that lives in Africa. Although the bird itself isn’t much to look at, it is responsible for building the biggest nest of any bird.

As its name suggests, the sociable weaver works cooperatively. The whole colony pitches in to build or maintain the nest, which is home to as many as 400 birds!

Nearly all birds are capable of flying – a feat that, if you think about it, is amazing in itself! However, because we see birds every day it’s easy to overlook both this and our feathered friend’s other incredible talents.

The birds on this page demonstrate the sheer variety of species in the order Aves. Whether it’s long-distance flying, talking, or solving puzzles, birds are amazing!

Are there any amazing birds we’ve missed? What are your favorites? Let us know in the comments!

1 thought on “Amazing Birds List With Pictures & Facts: An Avian Hall Of Fame”