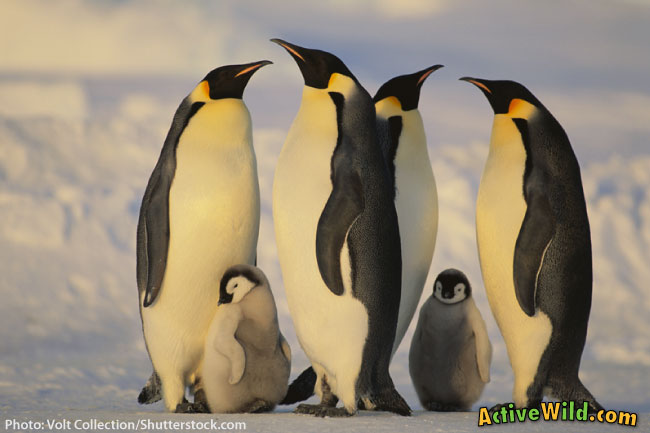 This page contains Emperor Penguin facts for kids and adults. Learn all about the world’s biggest penguin, with information, pictures and video …

When winter arrives in Antarctica, most of the continent’s summer residents have already long gone. Not so the Emperor Penguin. This incredible bird – the world’s largest species of penguin – actually chooses this time of year to breed!

After laying her single egg, the female penguin makes her way back to the sea. The male bird then incubates the egg for two months, standing like a statue while being buffeted by icy polar winds, all the while keeping its precious cargo warm under its body.

Antarctica is officially the coldest and windiest continent on Earth. Any animal able to endure these freezing conditions is bound to have a few evolutionary tricks up its sleeve, and the Emperor Penguin is no exception.

While it might not be able to fly, the Emperor Penguin makes up for this shortcoming by having many other incredible adaptations for living in the intense cold. We’ll learn about these further down the page …

Like all penguins, the Emperor Penguin stands upright, with its feet positioned at the base of its body. Its back, sides, flippers and head are black, and its chest and legs are white. There are patches of orange on either side of the head.

The black and white coloration is an example of countershading, a form of camouflage. Having a dark back and pale undersides is a visual trick that makes an animal less conspicuous to predators (or prey, if the animal is itself a predator).

Although an adult Emperor Penguin has little to fear on land, in the sea it is in danger from Leopard Seals and Orcas (Killer Whales).

The Emperor Penguin is the biggest species of penguin, in terms of both height and weight.

The Emperor Penguin’s body is torpedo-shaped. This minimises drag and allows the penguin to swim effortlessly though the water.

The Emperor Penguin, like all penguins, is flightless. It makes up for this by being an expert diver. Instead of flying upwards, the Emperor Penguin ‘flies’ downwards, diving into the icy Antarctic waters to incredible depths.

The Emperor Penguin is the world’s deepest diving bird. On longer dives, it can reach depths of 535m (1,755ft). The deepest ever recorded Emperor Penguin dive was 565m (1,854ft).

The Emperor Penguin often alternates shallow dives of between 50 and 150m (165 and 495ft) with deeper ones.

Most dives last for between 3 and 6 minutes, but the Emperor Penguin can make longer dives: the longest on record is 22 minutes.

Its expert diving ability allows the Emperor Penguin to find food that other penguins can’t reach.

What Does an Emperor Penguin Eat?

We’ve learned about the Emperor Penguin’s countershading, and how its torpedo-shaped body helps it to swim through the water. Let’s learn about some more Emperor Penguin adaptations that allow it to live in Antarctica …

The Emperor Penguin’s flippers are 25% smaller (in proportion to body size) than those of any other penguin. Its head and bill are also small in proportion to its body. This helps to prevent body heat from being lost from these extremities.

When making its record-breaking dives, the Emperor Penguin’s heart only beats between 15 and 20 times per minute, and non-essential bodily functions are shut down. This allows the penguin’s body to work while using very little oxygen, and means it can stay underwater for longer!

The Emperor Penguin’s multi-layered coat helps to keep it warm, and provides up to 90% of the bird’s insulation. Its oily outer feathers are waterproof, and its fluffy inner feathers prevent heat loss.

The Emperor Penguin has a 3cm (1.2in) layer of blubber under its skin to provide further insulation.

The Emperor Penguin’s scientific (binomial) name is Aptenodytes forsteri. The generic name (the first part of the two-part scientific name) comes from the Latin for ‘without wings diver’.

The second part of the scientific name is in honor of German naturalist Johann Reinhold Forster. Foster was the naturalist on Captain James Cook’s second Pacific voyage, which left England in 1772. During this voyage Foster studied and named several penguin species.

Where Do Emperor Penguins Live?

Emperor Penguins are found all round Antarctica. Breeding colonies are located by the coast or a short distance inland.

The Emperor Penguin is well known for being the only animal that breeds in the Antarctic winter. This is the coldest breeding environment of any bird species.

At the beginning of winter (around March to April in Antarctica) Emperor Penguins make their way to their breeding grounds, which are usually located on the sea ice. This can involve a walk of over 100km (62 miles).

Emperor Penguin breeding colonies can contain thousands – and even tens of thousands – of birds.

The birds partner up, and the female penguin lays a single egg, which is duly transferred to the male. The female then makes her way back to the sea. The male balances the egg on top of his feet, and settles down on top of it, keeping it warm in a special brood pouch under his body.

The male Emperor Penguin incubates the egg for 2 months, standing virtually motionless with the valuable egg under his body. During this time he is unable to eat, and will lose half of his body weight. Emperor Penguins are not territorial, and huddle together to keep warm.

Around the time that the chicks start to hatch, the females return. The male and female will then take turns to bring food to the chick. This they do by regurgitating food they have caught in the sea.

In December, when the Antarctic summer arrives, the parents leave their chicks to fend for themselves.

Food is at its most plentiful during the summer. This allows the Emperor Penguin to begin building up its body weight again, ready for the next breeding season.

How Long Does An Emperor Penguin Live?

Is The Emperor Penguin Endangered?

In 2012, the Emperor Penguin’s conservation status was changed from ‘Least Concern’ to ‘Near Threatened’. This is due to a decline in food availability due to industrial fishing and habitat destruction.

We hope that you’ve enjoyed learning all about this incredible survivalist.