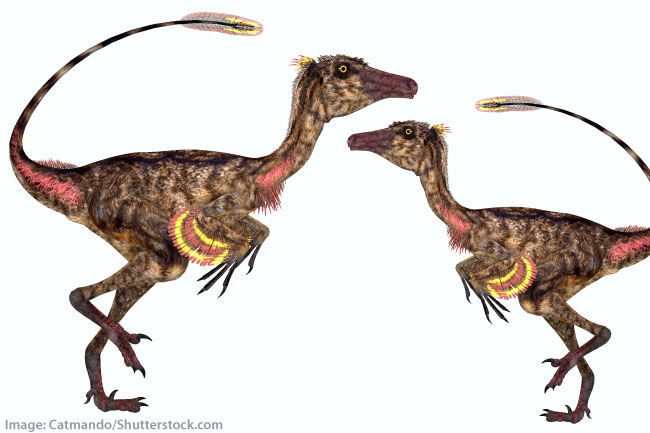 Troodon may have been small, but it was a fast-moving and intelligent dinosaur. This page contains Troodon facts for kids and adults: let’s learn more about this late Cretaceous theropod!

Troodon was a saurischian dinosaur (you can read about the different types of dinosaur here: Types of Dinosaur). It lived in North America around 77 million years ago, during the late Cretaceous period.

The name ‘Troodon’ comes from the Greek for ‘wounding tooth’. The only species identified in the Troodon genus is Troodon formosus.

Troodon was a small dinosaur, and would have stood around waist high to a man. It was bipedal (i.e. it stood on two legs), and had long, thin, powerful hind legs. Although relatively lightweight, Troodon was a fast runner.

On the second toe of each foot was an elongated, curved claw. Troodon would have been able to lift this up when running, and bring it down for fighting.

Troodon had long, thin arms, and each of its hands had three slender, clawed fingers. Using these, Troodon would have been able to hold onto and manipulate food and other objects.

Two distinctive Troodon characteristics are its big eyes and its big brain.

Troodon’s eyes were around 5 cm (2 in.) across. They pointed forwards, suggesting that Troodon was a hunter, and had a degree of binocular vision (i.e. it could tell how far away things were). The large size of its eyes also suggest that it may have hunted at night or in low light conditions.

Good vision suggests high intelligence, and Troodon had the largest brain – in comparison to body size – of any dinosaur.

However, scientists don’t think Troodon would have been particularly smart compared to most modern day mammals.

Armed with long, sickle-shaped claws, gripping hands, and excellent vision, Troodon would have been a fast, effective predator. Its diet would have consisted not only of other reptiles, but also of mammals, whose numbers were increasing at this time.

However, studies of Troodon teeth show some similarities with those of herbivorous animals, such as iguanas. This suggests that Troodon may also have eaten soft plant matter, such as seeds and fruit.

It is likely that Troodon was an omnivore (an animal that eats both meat and plants).

Although undoubtedly a smart (for a dinosaur), efficient hunter, Troodon may not have been an apex predator: a bite wound has been found on one fossilized Troodon specimen. Perhaps it was attacked by a larger dinosaur?

When & Where Was Troodon Found?

Troodon has been discovered across North America, from as far north as Alaska down to New Mexico and Texas in the south.

The first Troodon specimen to be discovered was a single tooth! This was found in Montana, and from just this specimen, paleontologist Joseph Leidy described the new species in 1856.

Since then, Troodon fossils have been found in other locations, including the Dinosaur Park Formation in Alberta, Canada, the Hell Creek Formation in Montana, USA, and the Lance Formation in Wyoming, USA.

It’s not just the remains of Troodons themselves that have been found; paleontologists have also discovered several Troodon nests! Around 1 m (3.3 ft.) in diameter, the nests held between 16 and 24 eggs.

We hope that you’ve enjoyed finding out about this fast-moving, intelligent predator.

If you want to learn more about dinosaurs, check these pages out: