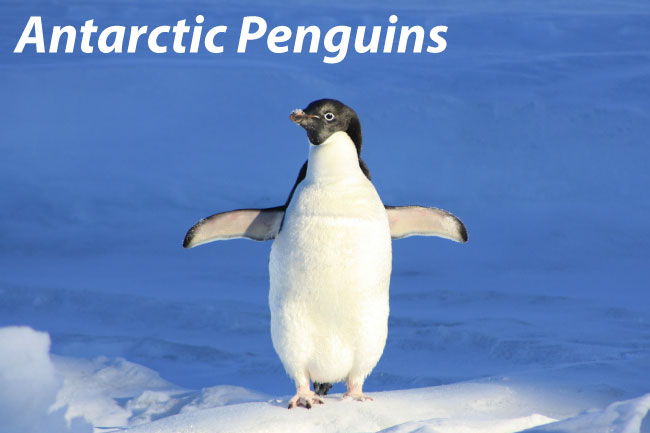 On this page, we continue our Antarctica series by taking a look at Antarctic penguins. We’ll cover the types of penguins in Antarctica itself, and we’ll also find out about penguins in the surrounding Antarctic region.

They’re among the world’s best loved animals, and because penguins stand upright and look vaguely human they’re often portrayed as being rather comical.

In fact, penguins are highly specialised hunters, able to survive in some of the world’s harshest environments.

Very few animals other than penguins are able to make a home either in the Antarctic region or on the frozen continent of Antarctica itself.

On this page we’ll find out about the five species of penguin that breed on the continent of Antarctica. Then we’ll look at some more penguins found in or near the Antarctic region.

Five species of penguin breed in Antarctica. They are the Adelie, Chinstrap, Emperor, Gentoo, and Macaroni penguin.

On this page we’ll look at each of these penguins in more detail. We’ll then find out about other Antarctic and subantarctic penguins.

The ‘Conservation Status’ gradings are from the IUCN Red List. You can learn more about what these mean here: Endangered Animals Facts.

The Emperor Penguin is the world’s biggest penguin. It grows to around 122 cm (48 in) tall. It is only found in Antarctica (i.e. it is endemic to the continent).

The Emperor Penguin is the only species of penguin that breeds during the Antarctic winter. This allows its chicks to grow in the (slightly) warmer summer months.

In the winter Emperor Penguins huddle together for warmth in huge colonies.

You can see a colony of Emperor Penguins in the incredible video below:

You can find out more about these amazing birds here: Emperor Penguin Facts

The Chinstrap Penguin is easily identified by the ‘strap’ of black under its bill. Although one of the five penguin species that breeds on Antarctica, the Chinstrap Penguin also breeds in Argentina, Chile, the Falkland Islands, and several other regions.

The Adélie Penguin is found further south than any other species of penguin. It is named after ‘Adélie Land’, a part of Antarctica which was itself named after a French explorer’s wife.

In the breeding season, Adélie Penguins form colonies that number over half a million birds. They are medium-sized penguins, recognisable by a white ring around their eyes.

You can tell a Gentoo Penguin by its white ‘eyebrows’. Like most penguins it has a white chest and a black back. This breaks up its outline while swimming and protects it from predators. Gentoo penguins have longer tails than other penguins.

The Gentoo Penguin breeds in several southerly locations, including Antarctic islands and the Antarctic Peninsula of Antarctica. It is the 3rd largest penguin.

You can see amazing footage of Gentoo Penguins (and the beautiful Antarctic landscape) in the video below: 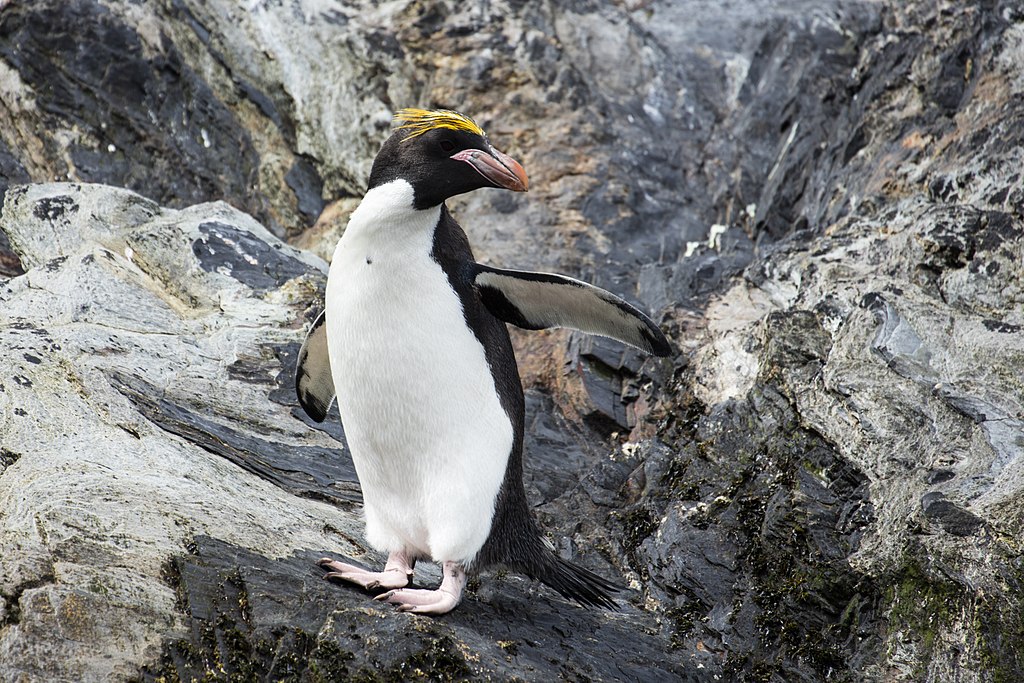 The Macaroni Penguin can be found on the Antarctic Peninsula and several other Antarctic and Subantarctic locations. It is easily recognised by its bright yellow crest.

Although the Macaroni Penguin is the most common of all penguins, with a global population of around 18 million, its numbers are declining. It is now rated as ‘Vulnerable’ on the IUCN Red List.

The King Penguin is the second largest species of penguin. It can grow up to a metre (3.28 ft.) tall. It is recognisable by its orange ‘headphones’ and bill, and the faint orange markings at the top of its chest.

The Southern Rockhopper Penguin is one of the smallest penguins, standing at around 50 cm (20 in) tall. It has bright red eyes, a red beak, and spiky black and yellow feathers of its head.

We hope that you’ve enjoyed learning about Antarctic Penguins.

Now you’ve found out about the penguins in Antarctica, you can discover even more of the region’s incredible wildlife here: Antarctic Animals List.

If you want to find out about the world’s polar regions, take a look at these pages: