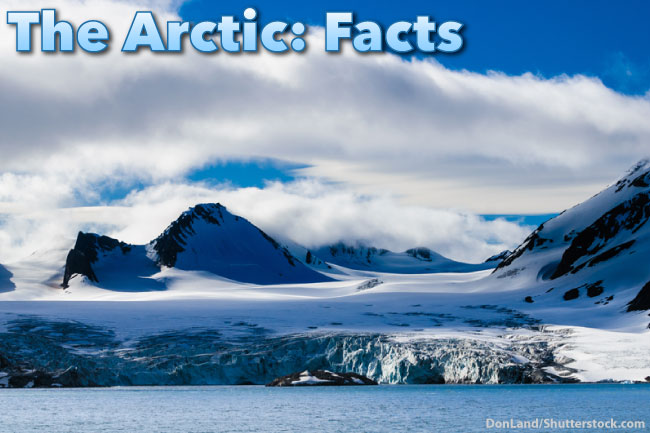 The Arctic facts for kids: read on to find incredible facts and figures about this amazing polar region.

In this article, you’ll find out where the Arctic is, learn about its climate and wildlife, and discover what life is like at the northernmost part of the world …

The Arctic Facts For Kids: What Is The Arctic?

The Arctic is the region around the North Pole. It is a sea of ice, surrounded by cold, treeless lands.

Despite these inhospitable conditions, the Arctic is home to many animals and plants. Many species living here have evolved special adaptations to live in the harsh environment.

The Arctic is the ‘Land of the Midnight Sun’. In the summer, months go by without the sun setting. In the winter, ‘Polar Nights’ – during which the sun never rises – also last for several months.

The North Pole itself is the northernmost point of Earth. Unlike the South Pole, which is on land, the North Pole is situated in the frozen sea ice of the Arctic Ocean.

(In a hurry? You’ll find a quick list of interesting Arctic facts at the bottom of the page.)

Where Is The Arctic?

There are actually several definitions of where –and what – the Arctic is.

Another definition of the Arctic is the ‘region in which the average temperature of the warmest month is under 10°C (50°F)’. Other definitions have been created by governments and organizations to include various geographical features and boundaries.

How Big Is The Arctic?

Using the ‘north of the Arctic Circle’ definition, the Arctic has an area of around 20 million km² (7.7 million square miles).

What is the Arctic Circle?

The Arctic Circle is an imaginary line that circles the northernmost parts of the earth. This circle runs parallel to the Equator.

In fact, due to variances in the earth’s axial tilt*, the Arctic Circle is currently migrating slowly northwards about 15 m (49 ft.) every year.

The Arctic Circle: Land Of The Midnight Sun

During the summer in the Arctic there are times when it doesn’t get dark – even at midnight!

During the winter, there are times when the sun doesn’t rise over the horizon – even at noon!

The further north you go, the longer the periods are during which the sun either doesn’t rise, or doesn’t set.

The video below shows how the sun doesn’t set in an Arctic summer.

The long summer days and long winter nights in the Arctic are due to the tilt of the earth. The earth spins at an angle (i.e. it’s tilted) as it revolves around the sun.

During the summer, parts of the Arctic Circle are never ‘hidden’ from the sun for the whole 24 hours it takes for the Earth to spin on its axis. In other words, it never gets dark!

Likewise, during the winter, parts of the Arctic Circle remain ‘hidden’ from the sun for 24 hours. In other words, it’s always night!

… This is at the southern limits of the Arctic Circle. The further north you go, the longer the periods during which the sun either doesn’t rise, or doesn’t set, become.

Latitude measures how far north (or south) something is. It’s the angle between the equator and a point on the earth, measured from the centre of the earth.

* In fact, as of February 2016, the exact latitude of the Arctic Circle is 66°33′46.1. As we’ve seen, this number changes very slowly over time, due to slight changes in the tilt of the earth.

The Arctic Ocean covers almost 5.5 million square miles (just over 14 million km²). It is almost five times the size of the Mediterranean, and almost as large as Antarctica.

The video below shows the amazing scenes as winter changes to summer.

Many scientists predict that the Arctic Ocean will be largely free of summer sea ice by the middle of the 21st century. Some predictions say that this could happen as soon as 2030, or even sooner.

However, recent studies have shown that the ice cap shrinkage has slowed in recent years, and that the amount of sea ice may actually be increasing.

The Arctic ice cap is important for several reasons. The ice prevents the Arctic Ocean from losing heat. Snow-covered sea ice also reflects solar radiation back into the atmosphere. If the ice melts, then sea levels around the world will rise. This will have a number of knock-on effects, not least the chance of flooding in low-lying areas.

The melting ice cap is already forcing the polar bear to change its behaviour. The polar bear does most of its hunting from the sea ice. There is now less sea ice, and what is left tends to melt sooner. The bears have to do more hunting inland, and are less able to build up valuable fat reserves for the winter.

People Living In The Arctic

Due to the harsh conditions of the Arctic, the area is sparsely populated. However, there are cities and towns within the Arctic Circle, including the Russian cities of Murmansk, Norilsk and Vorkuta and the Norwegian city of Tromsø.

Man has lived in the Arctic for thousands of years. Indigenous peoples of the region include the Inuit of Alaska, Canada and Greenland, and the Yupik of Alaska and Siberia.

Large areas of land inside the Arctic Circle are tundra. Tundra is a harsh, treeless environment in which the soil is permanently frozen.

Soil that remains at temperatures below the freezing point of water for longer than two years (such as that found in the Arctic) is known as ‘permafrost’. Permafrost prevents large plants (such as trees) from growing, and also hinders drainage. Shallow lakes and bogs that form in the warmer months are a feature of tundra.

There isn’t a lot of precipitation (snow, rain, hail, etc.) in the Arctic: the cold air doesn’t hold a lot of moisture. What little there is falls as snow. Less snow falls in the Arctic than rain in the Sahara Desert.

Temperatures in the Arctic only rise above freezing for between two and four months of the year. The warmest month in the Arctic is July. Even then, the average daily temperature doesn’t exceed 50° F (10° C). The average temperature in the winter can be as low as −40 °C (−40 °F).

Despite the harsh environment, many species of animal live in the Arctic, either all year round, or during the summer months.

Mammals living in the Arctic tend to have thick coats, which often have an inner and an outer layer. They have a thick layer of fat, which acts both as insulation and as a food store.

One of the Arctic’s most famous residents is the polar bear. It is the largest member of the bear family. It spends most of its life on the sea ice in search of seals, its favourite food. Grizzly bears are also found further inland.

Insects that live in the Arctic include species of bumblebees, beetles, flies, mosquitos, butterflies and moths.

Dwarf shrubs, sedges, grasses, mosses, and lichens make up most of the region’s plant life. The small, hardy plants grow in clumps and can form a thick layer on the tundra.

Arctic plants grow in these low ‘cushions’ to protect themselves from the wind, conserve moisture, prevent themselves being crushed by the snow, and to stay close to the ground where it is comparatively  warmer. Arctic flowers are specially adapted to make the most of the short summer season.

Arctic plants are an important source of food for the region’s wildlife. Reindeer moss (which is in fact a lichen) is, as its name suggests, an important food for reindeer.

Arctic Willow grows further north than any other woody shrub. It doesn’t grow much higher than 15 cm on the cold tundra, and forms an important part of the diets of many Arctic animals.

Below are some of the most interesting facts about the Arctic:

The Arctic Facts For Kids: Conclusion

We hope that you have enjoyed this page of Arctic facts. There is plenty more information about the Arctic on the site. Why not start by looking learning more about Arctic Animals?