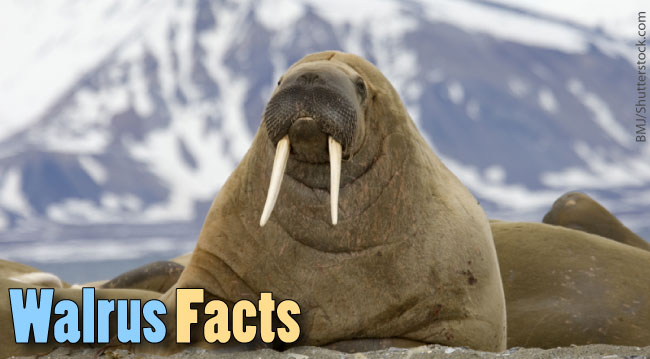 Walruses are large, blubbery, long-toothed arctic mammals. In this article we’ll learn more about these marine giants. Read on for more walrus facts for kids…

This page is part of our Arctic Animals series.

Walruses are marine mammals that can be easily identified by their long tusks, wiry moustaches, big flat flippers and blubber filled bodies. They are among the largest pinnipeds (fin-footed, semiaquatic marine mammals) and adults can measure up to 11.5 feet (3.5 meters) in length and can weigh a massive 1.5 tons. Their blubbery bodies provide protection from the chilly Arctic waters.

Where do Walruses Live?

Walruses are commonly found on the ice in the Arctic Circle. There are 2 sub-species of walruses, Atlantic and Pacific. Atlantic walruses can be found from northeast Canada to Greenland, while Pacific walruses are seen off Russia and Alaska. Pacific walruses are migratory, inhabiting the Bering Sea in winter, before migrating to the Chukchi Sea to summer.

Walrus Facts: What Do Walruses Eat?

Walruses are carnivorous, but are not active hunters. They feast mostly on shellfish, normally found at the dark seafloor. The whiskers of their moustaches (called mustacial vibrissae) are incredibly sensitive and aid in food detection. Walruses can eat a massive 4,000 clams in one feeding session! They feed by sucking food into the mouth rather than chewing it, spitting the shells back into the water. The carcasses of seals are also a food source for walruses when shellfish is in short supply.

The video below shows walruses in their natural environment.

The population size of walruses is currently unknown. Walruses are highly social, but also very aggressive towards each other during the mating season. Groups of walruses are called herds, and they gather in herds of hundreds on the ice. Females (cows) and males (bulls) form separate herds, but during the mating season, thousands of walruses will gather together on the ice. Dominant males are selected on the basis of age, body size and of course, tusk length. Females give birth to a single baby calf in the spring following 15 to 16 months of pregnancy (or very rarely to twins). Calves are able to swim as soon as they are born, and live with their mothers until 3 years of age. Males will then leave the female herd to live with the male herd.

The most iconic feature of walruses are their huge tusks which are used for many functions. One function is to help in hauling their huge, heavy bodies out of the icy waters onto the ice. They can also use their tusks to break through the ice and make breathing holes. Males also used tusks in aggressive displays to defend territories or their harem of females. Tusks can be found on males and females and are in fact canine teeth which continue to grow throughout life and in males can reach 3 feet (1 metre) in length.

Overhunting was previously a huge problem for walruses, and the entire population was almost wiped out in the 1950s. Today, only people native to the Arctic are legally allowed to hunt walruses. Hunters are attracted to the tusks, oil, skin and meat of the walrus. At present, the IUCN cannot categorize walruses as the population size is currently unknown. Walruses have only 2 natural predators in the wild; orcas and polar bears, which target calves.