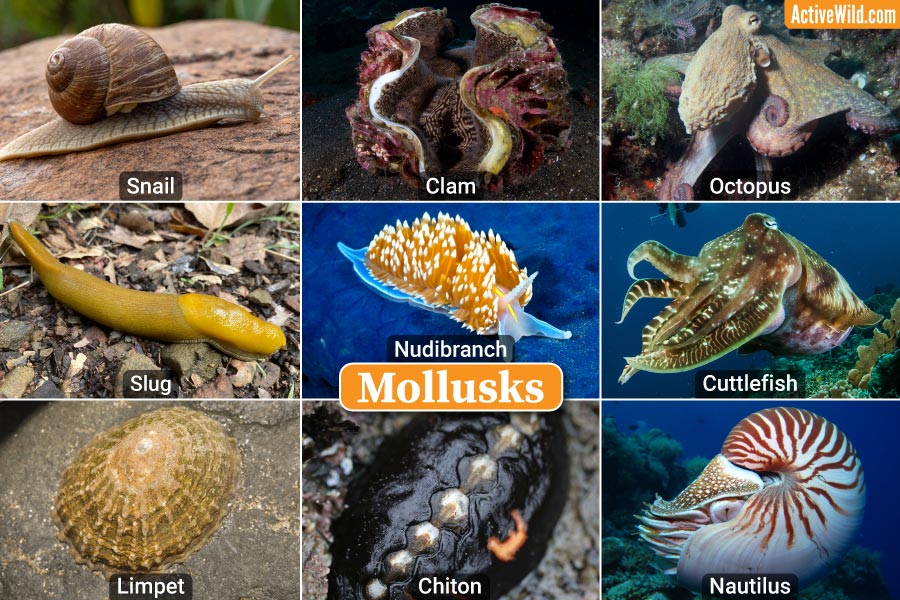 Examples of mollusks include bivalves such as clams, oysters and scallops; gastropods such as slugs, snails, limpets, nudibranchs and sea hares; and cephalopods such as squid, cuttlefish, nautiluses and octopuses.

(Note: outside of North America, “mollusk” is spelt “mollusc”.)

Continue reading to view the different types of mollusks and to find out more about mollusks in general, or use the index below to go directly to the information you need.

What Is A Mollusk?

What Is A Mollusk?

Mollusks are a large and diverse group of animals that make up the phylum Mollusca. Mollusks range from small, worm-like animals that inhabit the mud of the sea bed, to cephalopods such as cuttlefish and octopuses, which are among the most intelligent of all animals.

(A phylum is a group of related animals that itself can be split into smaller groups such as classes, orders and families. See this page: Animal Classification for more details.)

How Many Mollusk Species Are There?

There are 85,300 known living species of mollusks. (source – The Catalogue of Life)

Where Do Mollusks Live?

Most mollusks live in the sea, but some live in freshwater, and others, including many species of slugs and snails, live on land.

When Did Mollusks First Appear?

Mollusks first appeared over 520 million years ago, during the Cambrian Period. Over time, mollusks have evolved to fill many ecological niches, even leaving their ancestral ocean home and living in freshwater and terrestrial habitats.

Although a bivalve such as a mussel looks very different to a cephalopod such as an octopus, both they, and all other living mollusks, are descended from the same, ancient ancestors.

Mollusks are invertebrate animals with a nervous system and a body part called a mantle.

The shells of shelled mollusks are formed by secretions from the mantle. Cephalopods can propel themselves through the water by rapid contractions of the mantle – a form of “jet propulsion”!

Most mollusks have a specialized mouth part called a radula. The radula is coated with teeth and used to scrape food from surfaces.

Bivalves lack a radula and instead capture food by filtering it from the water with specially-modified gills.

At the base of the bodies of many types of mollusks is a muscular foot. In cephalopods, the food is modified to form tentacles or arms.

A bivalve is a mollusk with a flat body protected by two shells known as valves. (The word “bivalve” means (“two valves”.) The valves are hinged along the back edge, and are closed by adductor muscles. Bivalves are capable of holding their shells shut with surprising strength.

Bivalves lack heads and brains; their movements being controlled by a relatively simple (compared to those of other mollusks) nervous system.

Most bivalves are burrowers, but some can swim by rapidly opening and closing their valves, and others are sedentary, attaching themselves to underwater surfaces, and only capable of moving in their larval form.

Bivalves are filter feeders, obtaining food from the water with specially-modified gills. Bivalves lack a radula (the toothed, tongue-like organ found in other mollusks).

The name “mussel” has been given to several types of marine and freshwater bivalves, but is generally used to refer to bivalves of family Mytilidae, which are found in marine habitats.

Mussels are typically black or dark blue in color. They attach themselves to underwater surfaces, often forming “beds” consisting of large quantities of mussels.

Several mussel species are edible, and edible are harvested for food in many parts of the world.

There are several different types of oysters, including the “true” oysters belonging to the family Ostreidae.

Some oysters are edible, and species such as the Pacific oyster are farmed for this purpose.

Although many types of mollusks can produce pearls, those most closely-associated with pearl production are pearl oysters. These oysters, which make up the genus Pinctata, are harvested specifically for the purpose.

Unlike most bivalves, many scallops are able to move, doing so by rapidly opening and closing their shells. Scallops are only found in marine habitats, and are present in all of the world’s oceans.

Clams are edible bivalves that live partially buried in mud or sand at the bottom of both marine and freshwater habitats.

The giant clam is the largest living bivalve, with a shell width of well over 1m / 3.28 ft. It currently has the conservation status “Vulnerable”, and is threatened by over-harvesting for food. The giant clam belongs to the genus Tridacna (the other members of this group are also known as “giant clams”).

Gastropods are a group of mollusks commonly known as slugs or snails. This large group consists of over 70,000 known species and makes up around 80% of all mollusks. Gastropods are found in marine, freshwater and terrestrial (land) habitats.

All slugs (and snails) are mollusks. Banana slugs are particularly striking due to their large size and bright yellow color. Banana slugs are a group of gastropods (the genus Ariolimax) found in North America.

The giant African land snail (Lissachatina fulica) is the world’s largest living land snail, reaching lengths of around 20 cm / 7.87 in. Originally native to East Africa, the species is today found in many other parts of the world as a result of human introduction. The snail is kept as a pet, and also used as food.

Abalone are marine gastropods belonging to the family Haliotidae. The shells of abalone typically have a row of three or four respiratory holes.

Abalone are found in coastal waters of every ocean, and are most abundant in colder waters. Abalones are collected for food and also for jewelry, the insides of their shells being highly iridescent.

Whelks are sea snails with spiraled shells. They are harvested for food in many parts of the world.

Although several gastropods are known as whelks, “true whelks”, such as the common whelk (Buccinum undatum) belong to the family Buccinidae.

The name limpet is given to several different types of unrelated gastropods with conical, uncoiled shells.

Limpets are known for their ability to attach themselves extremely strongly to rocks and other surfaces. Unlike mussels, limpets are not permanently attached to the rock surface, and are able to move around.

Nudibranchs are a group of sea slugs known for their bright colors. They are found in oceans worldwide.

As larvae, nudibranchs have a shell, but this is shed when the animals metamorphosize into their adult form.

Sea hares are marine mollusks whose rounded shape and ear-like sensory projections give them a hare-like appearance.

The class Cephalopoda – the cephalopods – contains both the largest living mollusk (the colossal squid), and the most intelligent mollusks – cuttlefish, octopuses and squid are considered to be the world’s most intelligent invertebrates.

The class Cephalopoda is divided into two main groups: Coleoidea and Nautiloidea.

The subclass Coleoidea is home to squid, cuttlefish and octopuses. These mollusks are characterized by the lack of a shell, high intelligence, excellent vision, the ability to squirt ink and change color, and the use of jet propulsion for movement.

The subclass Nautiloidea is home to nautiluses. Today, this group contains just a handful of species, all of which have distinctive, coiled shells and tentacle-like projections known as cirri.

Cuttlefish are cephalopods with long bodies, eight legs and two tentacles. They propel themselves through the water with fins, and also by ejecting water forcibly from the mantle cavity. Their eyes have distinctive, W-shaped pupils.

A cuttlefish’s body contains a hard, porous structure called a cuttlebone. This is used to control the animal’s buoyancy.

The 300-or-so species of octopus make up the order Octopoda. Octopuses are marine mollusks with soft bodies and eight legs.

Squid are predatory animals, hunting their prey by sight and using jet propulsion to travel at high speed through the water. Their prey consists of fish, crustaceans and other cephalopods, including other squid (sometimes of the same species).

Nautiloids are cephalopods with distinctive coiled shells, and are the only living cephalopods with external shells. They move by jet propulsion and prey on crustaceans. Their eyes are less well-developed than those of other cephalopods, and they find food by sensing chemicals in the water.

The chambered nautilus is the best-known nautiloid. It is found in the South Pacific.

Chitons are marine mollusks in the class Polyplacophora. Unlike bivalves and gastropods, chitons are only found in saltwater. Chitons are found in oceans worldwide.

The shell of a chiton is divided into eight separate parts, known as valves. This allows the chiton a degree of flexibility when it is moving over rocks and other uneven surfaces. A chiton’s shell is surrounded or completely enclosed by a muscular structure known as a girdle.

Most chitons are herbivores, feeding on algae, but some species are omnivorous or even carnivorous, capturing crustaceans and other animals under the girdle.

The black Katy chiton (Katharina tunicata) is found in the Pacific Ocean. It grows to around 12 cm / 4.72 in. in length.

Tusk shells (also known as tooth shells) are mollusks in the class Scaphopoda. Tusk shells live buried in the mud of the sea bed, and are found in oceans worldwide.

Mollusks of class Aplacophora are small, worm-like animals found on the sea bed in oceans worldwide. Aplacophorans lack shells and exhibit a range of lifestyles: some burrow in the sediment, while others live on the surface of the sea bed; some prey on small ocean animals, while others feed on detritus.

You can find out more about the different types of animals on this page: Types of Animals

Discover amazing species from all around the world: A to Z Animals