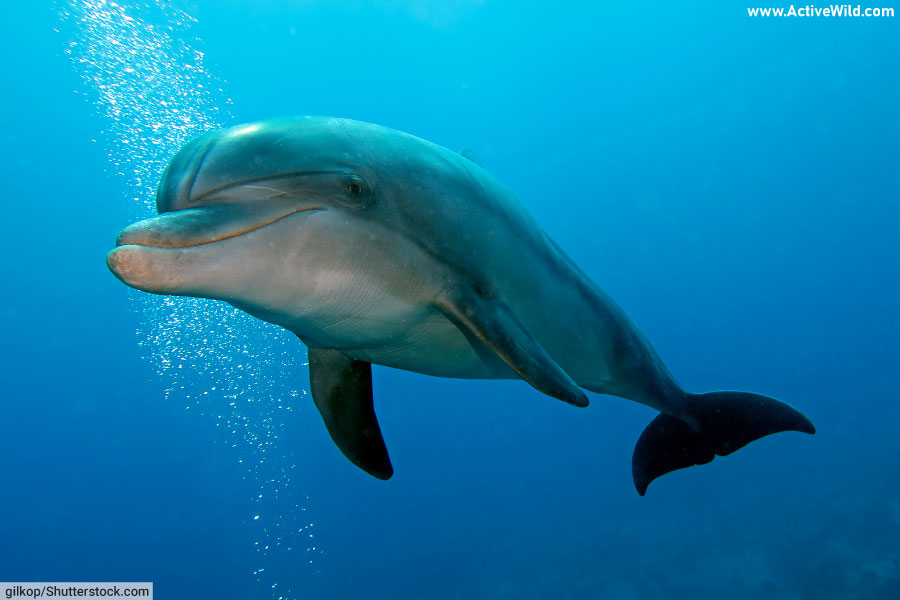 Recent research has found that dolphins have to “raise their voices” in response to heightened background noise. The findings add to existing evidence that anthropogenic noise – that is, sounds stemming from human activity – can be detrimental to ocean animals.

You’ve no doubt occasionally had to raise your voice when talking to a friend in a busy place; speaking loudly – and in some circumstances, even shouting – is a natural reaction to obtrusive background noise if you want to get an important message across… or even just to share the latest gossip.

There’s no doubt that modern life can be noisy – roadworks, trains, factories and a multitude of other sounds combine to make up the soundtrack to most of our lives.

This is something most of us put up with; the benefits we gain from the sources of the noise generally outweigh the discomfort it causes.

The same cannot be said for wild animals, who have no choice but to put up with human-made noise, and receive little in return for doing so.

Whereas we carefully monitor and control chemical emissions into the atmosphere or the oceans, we’re not so diligent in regard to the sounds we inflict on the environment.

The word “pollution” is generally applied to chemicals and such, but there is growing awareness that noise pollution can have a similarly harmful effect on the environment.

Marine zoologists in particular are concerned that anthropogenic noise has an adverse effect on numerous ocean animals. The main victims – that we know about – of underwater noise pollution are cetaceans – marine mammals such as dolphins, whales, and porpoises.

Several studies have found that cetacean strandings are being caused by noise pollution. A 2020 study (source) found that beaked whales were becoming stranded as a result of naval sonar.

A study published in 2022 (source) found that noise caused by marine traffic and seismic airguns (used to survey the sea bed) was affecting the behavior or narwhals (although no evidence was found of the whales being physically harmed as a result).

The researchers set out to find whether the ability of dolphins to perform a cooperative task was affected by the presence of man-made background noise.

The experiment was carried out over September and November 2022 at the Dolphin Research Center in Grassy Key, Florida, and involved two captive common bottlenose dolphins.

The test was performed in a lagoon equipped with two underwater buttons. In order to successfully complete the task, the dolphins had to press the buttons – which were located at opposite sides of the lagoon – simultaneously. Successful completion of the task relied on communication between the dolphins, and was rewarded with food.

The study suggests that anthropogenic noise can be detrimental to cetaceans’ ability to perform collective tasks.

The Importance of Sound to Cetaceans

Many cetaceans – including dolphins – are capable of echolocation, using sound to “see” by emitting clicks and using the resultant echoes to form a picture of their surroundings.

Baleen whales such as the humpback and blue whale don’t use echolocation, but are capable of both producing and detecting sounds far lower in frequency that those perceptible by the ears of humans.

Blue whales, for example, can hear sound with a frequency as low as a staggering 7 Hz. Even elephants can’t hear anything below 17 Hz.

Humans may have a relatively wide hearing range compared to other animals, but you won’t hear anything a whale says about you if it keeps its voice below 31 Hz.

The lower the frequency of a sound, the further it can travel underwater. With their low frequency calls, whales can communicate over distances of hundreds, if not thousands, of miles.

In the dark, murky depths of the ocean, Cetaceans are reliant on sound, rather than vision, to locate food and to stay in touch with each other.

It’s long been thought that noise produced by shipping is affecting the ability of cetaceans to communicate with one another, potentially hindering the marine mammals’ ability to navigate and socialize, and studies such as the recent bottlenose dolphin research suggest that background noise does affect cetacean behavior.

You can find out more about dolphins on this page: Bottlenose Dolphin Facts

You can find out more about whales (and other marine mammals) on this page: Are Whales Mammals?