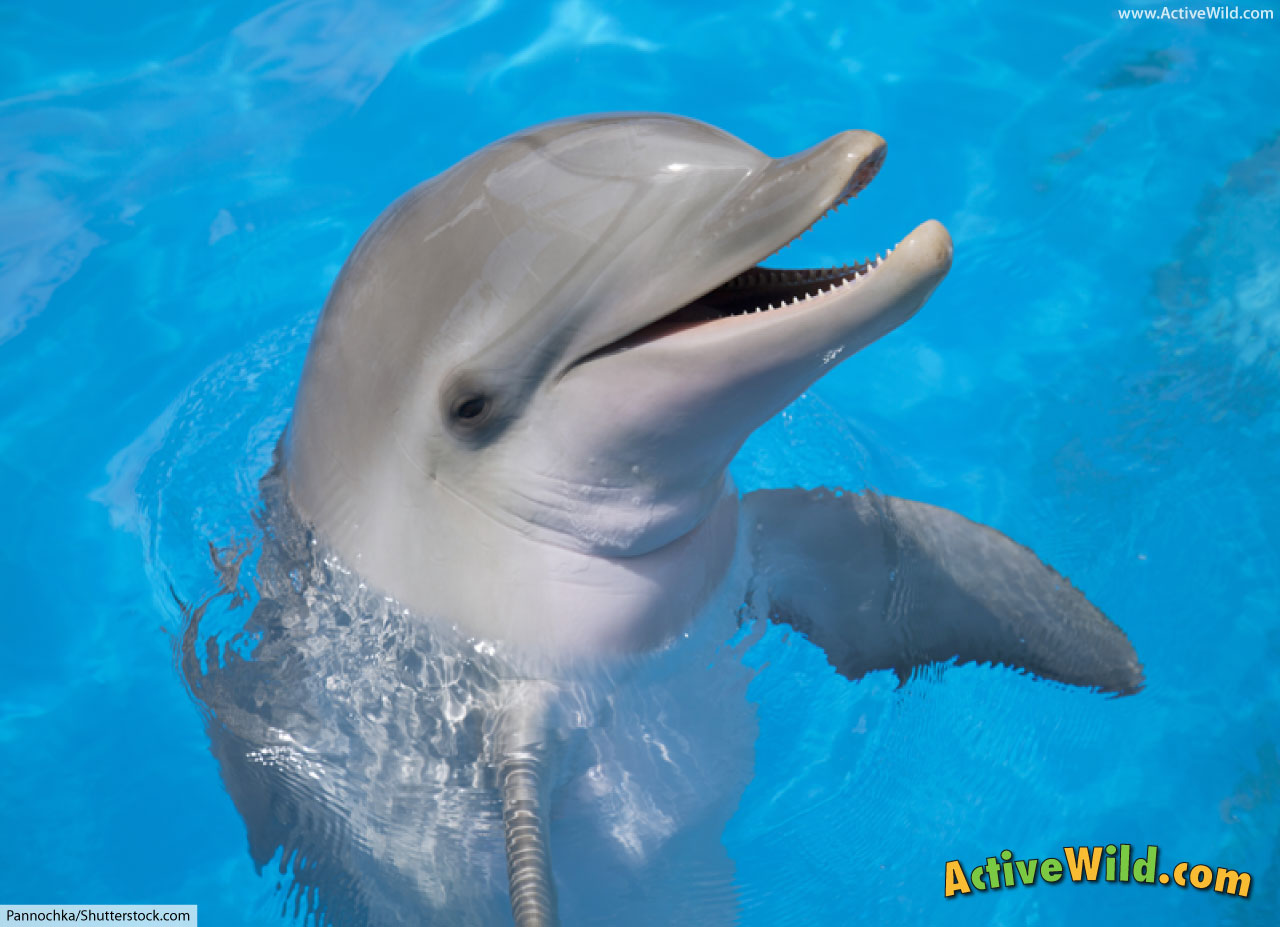 Common bottlenose dolphin facts, pictures, information and videos for kids and adults. Find out about this popular and intelligent marine mammal…

There are over 30 species of dolphin, but for most of us the common bottlenose dolphin is the ‘typical’ dolphin.

If you’ve ever seen a dolphin at an aquarium or at a water park then it’s most likely to have been a bottlenose dolphin.

Because there is significant genetic variation between different bottlenose dolphin populations, it is likely that other new species may be identified in the future.

The Burrunan dolphin (Tursiops australis) is a third type of bottlenose dolphin that was described in 2011. At present it is not recognized by authorities such as the IUCN and the Catalogue of Life.

The common bottlenose dolphin has a torpedo-shaped body with a pair of front flippers, a curved dorsal fin and horizontal flukes (the tail fin). Its bottle-shaped snout is short and well-defined, and the upward curve of the mouth gives an appearance of a permanent smile. A blowhole – through which the dolphin breathes – is positioned at the top of the head.

The bottlenose dolphin is usually dark gray in color. The sides range from black to light gray. The belly is white, occasionally with a pinkish hue. There are slight differences in color and markings between subspecies.

Dolphins that live closer to the shore are typically lighter in color, smaller in size, and have larger flippers than their offshore counterparts.

Male bottlenose dolphins are larger and heavier than females.

The common bottlenose dolphin is a member of Delphinidae, the oceanic dolphin family. Delphinidae contains around 30 species, including some species – such as the killer whale – that are known as ‘whales’ rather than dolphins.

All dolphins are members of Cetacea, a group of marine mammals that also contains the whales and the porpoises. The ancestors of all Cetaceans were hooved animals of the order Artiodactyla (animals in this order are known as even-toed ungulates).

The common bottlenose dolphin’s closest land relative is the hippo!

The common bottlenose dolphin is found in tropical, subtropical and temperate oceans all around the world.

The common bottlenose dolphin is often found in coastal regions. It inhabits the warm and shallow waters of harbors, lagoons, estuaries, bays and even the lower reaches of rivers. However, some populations are adapted to the deeper and cooler waters of the open sea. Dolphins found in colder areas have more blubber than those found in warm inshore areas.

The common bottlenose dolphin is a highly social animal. It lives in groups called pods which can contain from 2 to over 100 individuals. Occasionally several groups can briefly come together to form large aggregations of more than 1,000 animals.

The bottlenose dolphin also associates with other cetaceans, including other dolphin species and large whales.

Bottlenose dolphins engage in many types of social behavior, including bonding (stroking, etc.), aggression (biting and tail slapping) and what appears to be playing (e.g. tossing seaweed and other objects to each other, and swimming alongside boats).

Many populations of common bottlenose dolphin tend to remain in defined, long-term home ranges. However, some populations are migratory and may travel as far as 4,200 km (2,600 mi) in a season.

The common bottlenose dolphin uses a variety of squeaks and whistles to communicate with other individuals. It’s thought that each dolphin develops its own signature whistle at a young age. This helps family members recognize each other.

Body language, including leaping out of the water and slapping the surface of the water with the flukes, is also frequently used.

The bottlenose dolphin is known for being highly intelligent. Its brain mass is slightly larger than that of a human, ranging from 1,500 to 1,700 grams (human brain mass is 1,300 to 1,400 grams).

A bottlenose dolphin’s brain contains cells known as spindle cells. These are thought to be a sign of intelligence, and are present in the brains of other intelligent animals such as apes (including humans), whales and elephants.

Dolphins have complex social lives and have been observed playing, engaging in teamwork and using tools – all signs of intelligence. Dolphins can be taught tricks and are capable of complex problem solving.

Although the common bottlenose dolphin may mate any time of the year, there is often a peak in mating during the warmer months. Female dolphins usually once reproduce every 3 to 6 years, while males can mate multiple times per year.

Male dolphins have two main strategies to mating. The first involves parties of males searching for a female that is ready to mate, then separating her from her pod with the fittest attempting to mate with her.

The second main strategy is for a male to wait for a female to enter his home range and then engage in courtship behavior such as stroking and nuzzling in order to entice her to mate.

What Do Common Bottlenose Dolphins Eat?

The common bottlenose dolphin eats a wide variety of prey. Fish and squid make up a large part of its diet, but the dolphin will also consume shrimp and other crustaceans. The exact composition of the diet varies greatly from location to location.

The dolphins may hunt either individually or in groups. Their primary means of locating prey is echolocation; by emitting high frequency clicks and listening to the echoes they can ‘see’ their prey using sound.

The common bottlenose dolphin consumes from 4.5 to 16 kg (10 to 35 lb.) of food per day. Lactating females and larger individuals typically eat the largest quantities. Food is swallowed whole without being chewed.

Occasionally fish are thrown about, shaken and hit with the tail before being consumed by the dolphin (a behavior known as ‘fish whacking’).

The common bottlenose dolphin is vulnerable to predation by many larger shark species, such as the bull shark (Carcharhinus leucas), the tiger shark (Galeocerdo cuvier) and the dusky shark (Carcharhinus obscurus). Juveniles and smaller adults are more likely to be targeted by predators.

Is The Common Bottlenose Dolphin Endangered?

The common bottlenose dolphin is rated ‘Least Concern’ by the IUCN.

The species is abundant and widespread with an estimated minimum global population of 600,000 animals. However, many local dolphin populations face threats such as hunting for human consumption and for bait, accidental capture in fishing gear, pollution and habitat degradation.

Find out more about the amazing world of animals by visiting these pages: