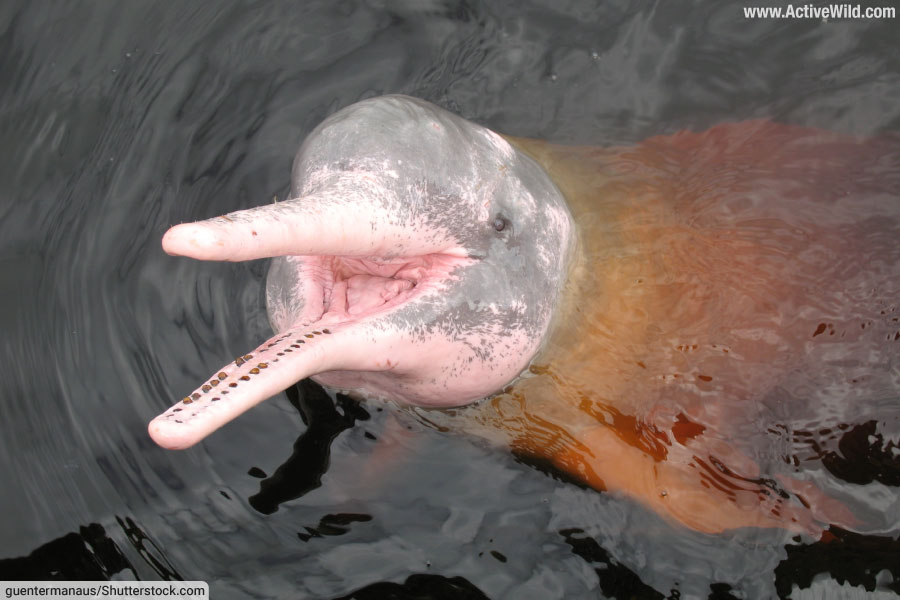 Amazon river dolphin facts, pictures and information. Not all of the Amazon rainforest’s animals live in or among the trees. The Amazon River itself provides a huge and varied habitat for a vast number of animals. One of the most amazing animals of the region makes its home in the river and its many tributaries. Let’s meet the Amazon river dolphin…

Dolphins are a group of aquatic mammals. (Aquatic mammals are mammals that have adapted to live in water). Most dolphins live in the sea.

Dolphins are members of a group of marine mammals known as the ‘toothed whales’. Also in this group are orcas and sperm whales.

River dolphins are a subgroup of dolphins that live in freshwater and brackish environments. (Brackish water is a mixture of fresh water and sea water.)

The color of the Amazon river dolphin ranges from grey to bright pink. The top side of the body is usually a darker shade.

Adult males are the most likely to be the distinctive pink color that give the species its name. Scientists are unsure as to what causes the pink coloration. Suggestions include diet, water temperature and injuries from fighting. Newly born Amazon river dolphins are dark grey.

The flippers and the flukes (the tail fins) of the dolphin are triangular and have ragged hind edges. The dorsal fin is rounded and not very prominent.

The long, thin snout curls slightly downwards. The eyes are small but functional (unlike those of the South Asian river dolphin, a virtually blind river dolphin found in Asia).

Like all toothed whales, the Amazon river dolphin has a melon – an oil-filled sensory organ that appears as a bulge on the animal’s forehead. The melon is used for echolocation, the process by which the dolphin uses sound to find its way around in the murky water.

You can see some amazing footage of Amazon river dolphins in the wild in the video below:

The Amazon river dolphin has the widest distribution of any river dolphin. Its range covers an estimated 7 million km2 (2,700,000 mi2). The species is endemic* to South America. It has been recorded in 6 countries: Bolivia, Brazil, Colombia, Ecuador, Peru and Venezuela. The dolphin is present in both the Amazon and Orinoco river systems.

* Endemic means ‘only found in’.

The Amazon river dolphin is restricted to freshwater habitats. In addition to the main rivers, it also inhabits smaller tributaries, mouths of rivers, canals, lakes, floodplains and flooded forests.

The dolphin moves between different habitats seasonally. During the dry season, it stays in the main river channels.

During the wet season the water level rises, allowing the Amazon River dolphin to disperse into smaller tributaries. It will also venture into flooded forests and plains, swimming among the roots of trees in search of food. Females and their young tend to spend far more time in flooded areas than males.

The Amazon river dolphin is most often observed either singly or in pairs. Small pods of 3 to 5 dolphins may also form. Larger aggregations of up to 30 or more individuals can also be seen where prey is particularly abundant.

Amazon river dolphins use at least 10 distinct calls to communicate with each other. These include various clicks and whistles.

The species has a curious and playful nature. Amazon river dolphins have been observed playing with a range of different objects, including sticks, lumps of clay and small animals.

Although the species isn’t territorial, aggression and fighting is common, especially among males.

Males Amazon river dolphins often bear multiple scars or injuries. This would suggest that they fight aggressively over the females during the mating season.

Object carrying (e.g. branches & other vegetation) by adult males is thought to be a part of their mating behavior. A male will often nibble a female’s fins when making initial contact.

The Amazon river dolphin is a seasonal breeder. Births occur between May and July after a gestation period of about 11 months. The calf measures about 80 cm (31 in) at birth.

The female nurses her young for around 1 year. The strong bond between the mother and calf continues for an additional year or two.

What Do Amazon River Dolphins Eat?

The Amazon river dolphin’s diet is among the most diverse of all the toothed whales. The species feeds on a wide range on prey animals during the wet season. During the dry season it becomes more selective. The dolphins can consume up to 5.5% of their body weight in a single day.

The Amazon river dolphin feeds on up to 53 fish species from 19 different families. Its prey includes catfish, croakers, tetras and piranhas. The dolphin also feeds on freshwater crabs and river turtles. The size of a typical prey animal ranges from 5 to 80 cm (2.0 to 31.5 in).

Typically, the dolphin feeds near the bottom. It uses echolocation to find prey in the often murky water.

The Amazon river dolphin has occasionally been seen hunting cooperatively with other species, including the distantly-related tuxuti (Sotalia fluviatilis) and the giant otter (Pteronura brasiliensis).

Is The Amazon River Dolphin Endangered?

Since 2008 the Amazon river dolphin has been rated as ‘Data Deficient’ by the IUCN. The reason for this is because total population size, population trends, and the exact impact of the various threats faced by the species are not clear. Previously, the species was rated ‘Vulnerable’.

The most significant threats to the species include: