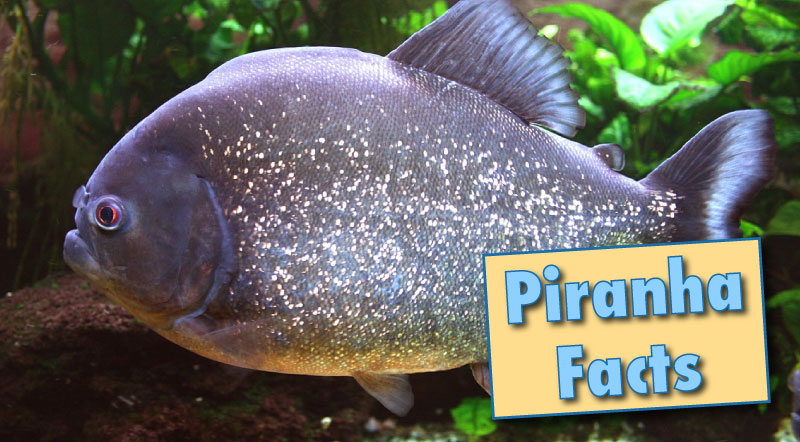 Piranhas are small fish with a big reputation — and big teeth! Piranhas are freshwater fish, and live in the rivers and streams of South America.

This article contains piranha facts and information, and is part of our Rainforest Animals series.

The piranha’s fearsome reputation is partly due to fact, and partly due to fiction. Although piranhas are predatory, they are also just as likely to be preyed on by other animals.

Do you need to be careful when you go swimming in the rainforest? Read on to find out …

The piranha is a relatively small fish with a round body, large head, and bulldog-like face.

Piranhas swim in groups called shoals. There are usually around 20 piranhas in a shoal.

Although it was once believed that piranhas swim in shoals in order to attack, it is now thought that swimming in groups provides protection from predators.

There are at least 20 species of piranha – and there could be as many as 60! Scientists are unsure of exactly how many species there are. Piranhas come in an array of different colours, including yellow, gray, blue, red, and black.

One of the most common species of piranhas is the red-bellied piranha, so named for its reddish belly.

Another common type of piranha is the black piranha.

The piranha’s most notable characteristic is of course its set of razor sharp teeth. The teeth are triangular in shape and are used to puncture and tear the fish’s prey.

A piranha’s teeth are replaced continuously throughout its lifetime. The teeth grow in four sets; one for each corner of the fish’s mouth. Sets are replaced every 100 days.

It’s not uncommon to find a piranha with half of its bottom teeth missing, waiting for the new set to emerge.

A young fish of only 6 inches can already possess teeth that are 1/6 of an inch long!

Despite their reputation of being voracious meat eaters, piranhas are actually omnivores (plant and meat eaters).

Piranhas mostly eat smaller fish, snails, insects, and some aquatic plants. However, they didn’t get their ferocious meat eating reputation for nothing. They will also eat small mammals and birds that have fallen into the water.

Piranhas are known as ‘opportunistic carnivores’. This means that if the opportunity arises for an easy meat meal, piranhas will take it!

Piranha feeding frenzies occur when there has been a shortage of food and the shoal locates some prey. Sensing blood in the water, each fish in the shoal attempts to tear off a piece of food.

When this occurs, the water seems to boil and churn.

Piranhas are capable of stripping their prey of flesh in a matter of minutes, and when frenzied, will bite one another in the process.

The video below shows a piranha feeding frenzy in full swing!

Piranhas are freshwater fish, and are found primarily in South America in the Amazon Basin, the Orinoco River and east of the Andes Mountains. They can inhabit diverse locations such as lakes, tributaries, wetlands and creeks.

They have even been found in flooded forests.

Piranhas prefer fast-flowing water. They are highly tolerant of many water conditions; surviving in whitewater, blackwater, and clearwater rivers. They live in water that is 75-86 degrees Fahrenheit (24-30 degrees Celsius).

The idea that piranhas will attack humans is mostly myth. Attacks by piranhas on humans are rare, and most have been exaggerated.

A piranha will bite if it feels threatened or if its eggs are being endangered.

Black piranhas and red-bellied piranhas are believed to be the most aggressive species, and the most dangerous to humans.

Piranhas are eaten not only by other predatory fish (including other piranhas), but also by animals such as herons, caimans, water snakes and turtles.

Adult piranhas have been known to eat their own young.

Piranhas lay groups of eggs in larger bodies of water, such as lagoons. The female will lay several thousand eggs in a bowl shaped nest made in the sediment (the material that has sunk to the bottom of the body of water). The eggs are then fertilized by the male and will hatch two to three days later.

The piranha parents will defend and protect the eggs and young once they are hatched.

Although piranhas can be kept in home aquariums, they do not always make good pets. Owners must be very careful of the piranha’s sharp teeth and aggressive nature.

It has been known for people, tired of owning such a difficult pet, to release piranhas into the local waters; this causes a serious danger both to other fish and humans.

Keeping piranhas as pets requires knowledge, skill, and commitment. Unless you have all of these, they may not be a great choice.

It’s also illegal to keep piranhas in some areas, so if you’re looking for a new pet, it’s probably best to stick with a goldfish!

We hope that you have enjoyed these piranha facts.