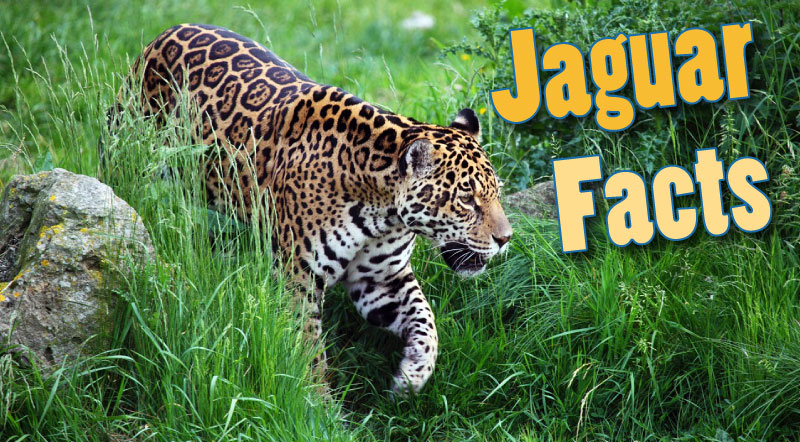 This page contains information about jaguars, and includes a list of jaguar facts for kids. This article is part of our Rainforest Animals series.

The jaguar’s size, strength and expert hunting ability means that it’s an apex predator in the rainforests of South and Central America. Read on to find out more about this deadly rainforest cat…

Jaguars And The Cat Family

The jaguar is a large, powerfully-built cat. Its coat is pale orange and marked with rings called “rosettes”. Within each rosette are one or more smaller black spots.

Jaguars are members of the cat family Felidae – the same family to which your pet cat belongs! Members of this family are known as felids.

Jaguars belong to a subfamily of Felidae called Pantherinae. Other members of this subfamily include lions, tigers, leopards and snow leopards.

Jaguars are the third-largest cat species: only tigers and lions are bigger. The jaguar is the biggest cat native to the Americas.

The jaguar belongs to a group of felids known as the “big cats”. You can find out more about big cats on this page: What Is A Big Cat?

Jaguars are solitary creatures, each living in its own area, known as a “territory”. Jaguars protect their territories from other jaguars.

Female jaguars give birth to 1 – 4 kittens at a time, and cubs live with their mothers for 2 or more years before they go off on their own.

Jaguars are powerfully built, and are excellent climbers and swimmers.

Jaguar Vs Leopard… vs Panther?

Jaguars and leopards are very similar. Both are large, spotted, big cats. However, Jaguars are bigger and more heavily built. Jaguars’ rosettes are bigger, less densely spaced, and have a central spot which leopards don’t have.

Jaguars live in the Americas, and leopards are found in Africa and Asia.

Some jaguars (and leopards) have markings that are so dense that the animals looks completely black. These animals are known as ‘panthers’, but they are in actual fact just jaguars or leopards, and not a separate species.

Where Do Jaguars live?

Jaguars are found in North, Central, and South America. Jaguars are even occasionally seen in Arizona, in the United States!

However, jaguars are mainly forest creatures, and prefer the dense rainforests of South America. They are also found in wetlands and grasslands.

Jaguars are most numerous in the Amazon Basin (the area around the Amazon river) and The Pantanal — a large wetland area in Brazil and parts of Bolivia and Paraguay.

Jaguars often live near water. Unlike other cats, jaguars are excellent swimmers, and can swim across rivers. They will also approach ambush prey from the water.

Watch the video below to see how at home a jaguar is in the water.

How Big Are Jaguars?

What Does A Jaguar Eat?

In fact, jaguars are known as one of the best ambush hunters of all! If you are in the rainforest, always keep one eye on the trees above you!

Jaguars dispatch their prey with a strong bite to the neck that suffocates the animal. Jaguars can also use their strong jaws to crush the skulls of smaller prey animals, killing the prey instantly.

Jaguars are classed as being ‘Near Threatened’ by the International Union for Conservation of Nature (IUCN). As with many rainforest species, the biggest threat to Jaguars is habitat loss due to deforestation. They are also shot by farmers protecting their livestock, and even today some are shot for their fur.

There are only about 15,000 jaguars living in the wild in their natural habitat.