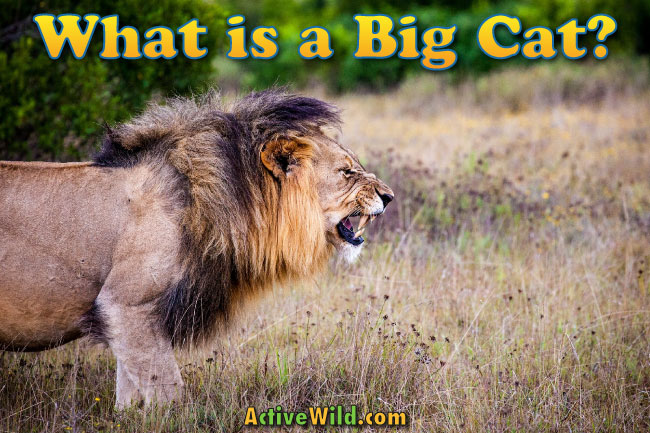 Powerful, stealthy, and equipped with acute senses and fearsome weaponry, big cats are among the world’s deadliest predators. But what exactly is a big cat?

What Is A Big Cat? Definition

Around 40 species of cat are currently recognized. These range in size from the tiny black-footed and rusty-spotted cats, to the mighty tiger, the world’s largest living cat.

All cats are in the family Felidae. Some of the largest members of this family form a group known as the ‘big cats’. However, ‘big cat’ is not a scientific term, and can mean different things to different people.

On this page, we’ll look at some common definitions of the term ‘big cat’, and we’ll meet some of the amazing animals that are generally considered to be big cats.

What Is A Big Cat? Cats That Can Roar

The term ‘big cats’ is often used to refer only to cats that can roar. By this definition, there are just four big cats: the tiger, lion, jaguar and leopard.

(Note: all of the lists on this page are in order of size, from large to small.)

How And Why Do Big Cats Roar?

The throats of cats that can roar are slightly different to those of other cats.

Roaring requires ‘incomplete ossification’ of the hyoid bone. The hyoid bone is a U-shaped bone in the throat that is connected to the larynx (voice box).

‘Ossification’ is the formation of bone. A big cat’s hyoid bone is not completely ossified and is part tendon. Tendon is more flexible than bone, giving a big cat’s voice box greater flexibility.

All this is rather technical, but suffice to say these adaptations allow the big cats to produce the loud, deep vocalizations known as roars.

Roaring serves a number of purposes, and usually signifies aggression. Competing males often roar at each other during the mating season. Roaring also signals to other big cats that a territory is occupied. It’s a good way to show how big and tough you are without actually having to fight your rivals!

The lion has the loudest roar of any big cat; a lion’s roar can be heard up to 8 kilometers (5.0 mi.) away!

Is The Snow Leopard A Big Cat?

Yes and no! Although the hyoid bone of the snow leopard is incompletely ossified, the species lacks the necessary adaptations to the larynx that would allow it to roar. Some people consider the snow leopard to be a big cat; others do not.

As we’ve found, ‘big cat’ isn’t a scientific term, and has several different meanings. Let’s look at some of them …

What Is A Big Cat? A Member of Pantherinae

Felidae – the cat family – is split into two subfamilies, Pantherinae and Felinae.

Confused about terms such as ‘genera’ and ‘family’? Our guide to animal classification will make everything clear!

Some people use the term big cat to refer to all species in the genus Panthera, in which case the list of big cats would look like this:

Other people consider all species within the subfamily Pantherinae to be big cats. A list of big cats using this definition is shown below:

What Is A Big Cat? Cats That Are Literally Big Cats

Using the ‘cats that can roar’ definition, the cougar – which is the world’s fourth largest cat species and on average larger than a leopard – is not a big cat, whereas the leopard is.

The cougar – also known as the mountain lion, or puma – is a member of the cat subfamily Felinae. This would rule it out of being a member of the big cat club if the other definitions above were being used.

Another cat ruled out using these definitions is one of the most famous cats of all: the record-breaking cheetah.

The cheetah is, on average, heavier than the snow leopard. It’s also taller than the leopard, but not usually as heavy.

Sometimes the term ‘big cats’ is used simply to mean a member of the cat family that is large in size. This is the loosest definition of ‘big cat’, but does allow for the inclusion of the cougar and the cheetah!

The Eurasian lynx, which is larger than both the Sunda clouded leopard and the clouded leopard, could also be considered to be a big cat by this definition.

Using an ambiguous term such as ‘big cats’ can cause confusion. It is better to be clear about what you mean by being more descriptive.

For example, you could use phrases such as: ‘cats in the genus Panthera’, or ‘the Pantherinae subfamily of big cats’ instead of simply saying ‘big cats’.

Then anyone who knows their stuff will know which species you are talking about!

Now we (sort of) know what a big cat is, let’s take a closer look at some of these amazing animals. Follow the links to find out more about a particular species.

The conservation status of each species has been included (as found in the IUCN Red List). Note that many big cats are currently either vulnerable or endangered. 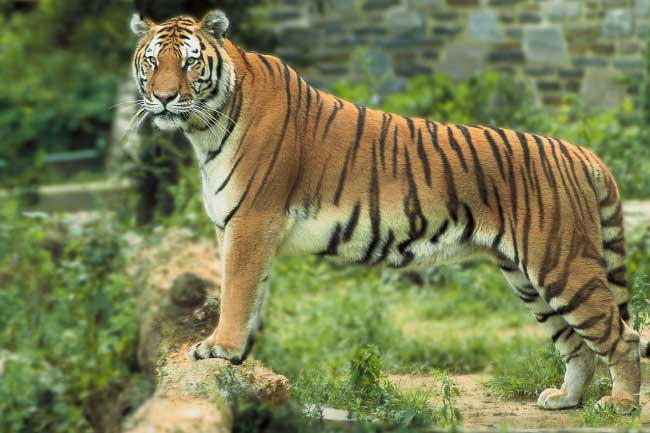 The tiger is the largest cat species. An apex predator, the tiger specializes in taking down large mammals such as deer and cattle. It usually lives and hunts alone.

The tiger is found in parts of Asia and eastern Russia, but now only inhabits under 6% of its original range. It is rated Endangered by the IUCN, and today there are only around 3,200 tigers left in the wild.

The male lion, with its flowing mane and powerful body, is one of the best-known animals in the world.

Unlike many cat species, the lion lives in groups called prides. The average number of lions in a pride is 15. Prides consist of several related females and 1 to 4 males. Male lions are turned out of the pride when they reach adulthood. They live nomadic lifestyles before forming prides of their own.

The lionesses work as a team to feed the pride. The male lions protect the pride from intruders.

Most lions live in Africa. A small population is also found in India. The lion’s conservation status is Vulnerable, and its population is thought to be decreasing.

The jaguar is the largest cat found in the Americas. Although occasionally seen in the United States, most jaguars live in Central and South America.

The jaguar is larger and more heavily-built than the leopard, which it resembles on account of its pale yellow color and black rosettes.

The jaguar is an apex predator, and is known for its exceptionally powerful bite, which can pierce the shells of turtles.

The jaguar is rated Near Threatened by the IUCN.

The cougar is the second-largest cat of the Americas, and the fourth-largest cat species in the world. Despite this, it is not a member of the cat subfamily Pantherinae, and for this reason is not considered to be a true big cat.

Cougars are found in many parts of North and South America. The species is most often found in forests, but is also able to live in more open environments.

The cougar will take a variety of prey, from deer to raccoons.

Although the cougar population is thought to be decreasing, the species’ IUCN conservation status is Least Concern.

Leopards are found in Sub-Saharan Africa and in parts of Asia. These graceful big cats are known for their strength and speed. After dispatching its prey, a leopard will often drag the carcass up a tree and out of the reach of scavengers.

The leopard’s coat is covered with dark rosettes. These provide camouflage in the grassland and forest habitats in which the leopard lives.

The leopard is rated Vulnerable by the IUCN.

The cheetah is often considered to be a big cat due simply to its large physical size in relation to other cat species. However, it is not a member of the cat subfamily Pantherinae, and therefore cannot be considered to be a true big cat.

The cheetah is a tall, slender cat with a spotted coat and distinctive ‘teardrop’ facial markings. Most cheetahs live in Africa. The species is mostly found in the east and south of the continent. Small cheetah populations also exist in western Asia.

The cheetah is the world’s fastest land animal. It is capable of reaching speeds of up to 70 mph (112 km/h). The cheetah needs to be fast; its prey includes antelopes which are themselves some of the fastest animals on Earth.

The cheetah’s conservation status is Vulnerable, and its population is decreasing.

The snow leopard lives in the mountains of Central and South Asia. It has a number of adaptations for living in this cold, mountainous habitat. These include: a thick, pale coat, small ears (to prevent heat loss) and wide paws, the undersides of which are covered with fur for grip and insulation.

Unlike other cats, the eyes of the snow leopard are a pale green color.

The snow leopard is Endangered. It is thought that there are fewer than 7,000 individuals left in the wild.

The Sunda clouded leopard lives in rainforests, and the large dark patches on its coat provide excellent camouflage in this environment.

The Sunda clouded leopard is rated Vulnerable by the IUCN, and its population is decreasing.

The clouded leopard lives in rainforests in Southeast Asia. This mid-sized cat is smaller than the other big cats in the cat subfamily Pantherinae, but larger than most cats in the subfamily Felinae.

The clouded leopard gets its name from the cloud-like dark patterns on its coat. It is a master at climbing, and thanks to extra-flexible joints can climb head first down tree trunks.

The clouded leopard has exceptionally long canine teeth, which, in relation to body size, are the longest of any cat.

The clouded leopard is rated Vulnerable by the IUCN, and its population is decreasing.

What Is A Big Cat? Conclusion

On this page we’ve looked at various definitions of the term ‘big cat’ and met some of the species that are considered to be big cats. We’ve found that the term ‘big cats’ is not scientific, and that its use can be problematic.

If you use the term ‘big cat’ remember that it means different things to different people. To be safe you could just use it to refer to the cats that can roar; namely the tiger, lion, jaguar and leopard.

These are the species that most people recognize as being big cats. The snow leopard could also possible be added to this list.

You could also use the term ‘big cat’ to refer to members of the subfamily Pantherinae. This includes all of the cats that can roar, together with the snow leopard, the Sunda clouded leopard, and the clouded leopard.

Although the cougar, cheetah and Eurasian Lynx are all big cats in terms of physical size, only by the loosest definition of the term can they be considered to be true big cats.

Many of the species considered to be big cats are currently threatened with extinction. Why not look into what you can do to help them?

2 thoughts on “What Is A Big Cat? Facts, Definition, Pictures & Information”