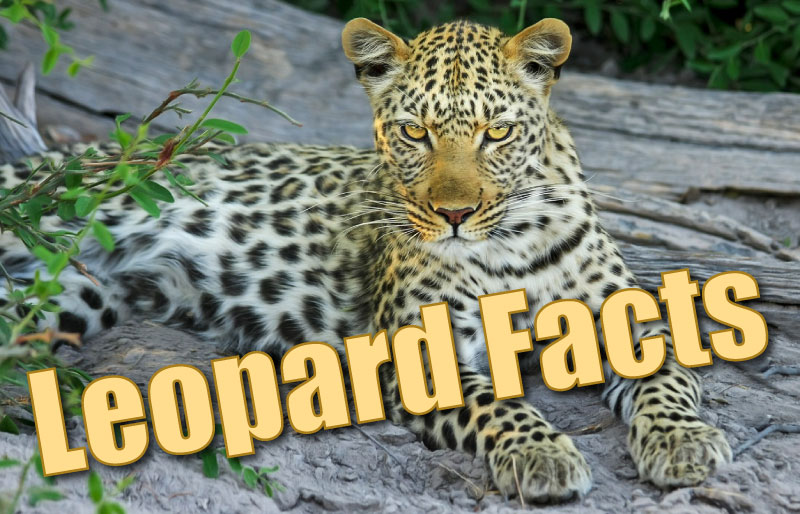 Leopard facts for kids, students and adults. The leopard is a supreme hunter, known not only for its speed and power, but also for its stealth. In this article we’ll take an in-depth look at this beautiful big cat.

The leopard is a member of the genus Panthera, which also includes the lion, tiger, jaguar and snow leopard. This group of animals is also informally known as the ‘big cats‘.

The leopard is the second-smallest of the big cats; only the snow leopard is smaller.

Where Do Leopards Live?

Leopards are found in Northeast Africa, Sub-Saharan Africa, Central Asia, China and India. Outside of Africa, their populations are endangered.

Leopards are muscular and sleek. Their fur is tan with a distinct rosette pattern. Their undersides are cream or white.

How big are leopards?

How strong are leopards?

Leopards are extremely strong. Pound for pound, they are the stronger than lions, tigers and jaguars. They are able to lug large prey high into the trees to keep them safe from scavengers ( animals that eat prey that is already dead) like hyenas.

From high in the trees leopards can spot and pounce on prey undetected, a skill that takes a tremendous amount of strength.

Do leopards live alone or in groups?

Leopards live alone, except to mate or when a female has young. Leopards are very protective of their territory. They urinate on trees and brush to mark their area. They also claw trees to keep other leopards away.

What do leopards eat?

Leopards are carnivores (meat eaters). They are excellent hunters. Leopards are nocturnal (active at night). Deer, antelope and wild hogs are no match for these sneaky cats.

Leopards’ colouring allows them to stalk prey and wait for the perfect moment to pounce. Even gorillas are no match for them, leopards are the only known natural predator known to gorillas.

The video below shows just how a leopard hunts its prey.

Leopards are agile swimmers, which means that crabs and other aquatic animals are on their menu. One scientist observed a leopard kill and eat a baboon, then notice it had a baby along. The leopard took the baby baboon up into the trees and groomed and nurtured it just like one of its own!

Are leopards dangerous to humans?

Occasionally, leopards attack humans, as well as pets and livestock. As populations increase and people begin to live closer and closer to the leopards natural habitat these attacks have increased.

Leopards are simply protecting their territory and hunting for food, which is natural for animals. We can limit these attacks by stopping deforestation and protecting the natural habitats of wild animals.

1. A legend is a traditional story that is used to explain something that was often unexplainable by people in the past. These stories were passed down from generation to generation. Even now, people still enjoy listening to the stories.

3. get involved in fundraising for a charity such as Big Cat Rescue.