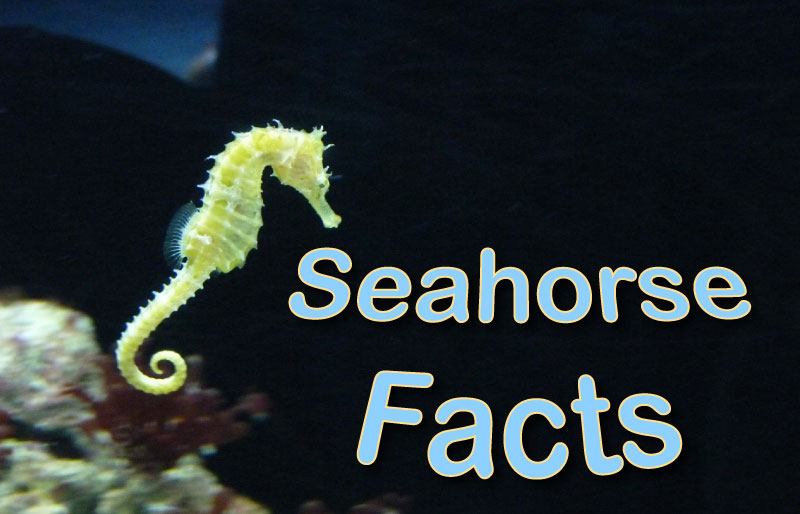 Seahorses are marine fish in the genus hippocampus (a ‘genus’ is a category of animals that uses a Latin name) . In Ancient Greek “hippos” means horse, and “kampos” means sea monster.

Seahorse is a general term that is used for fifty four species of marine fishes. Read on for more seahorse information, including a list of awesome seahorse facts for kids…

Seahorses are used in Chinese medicine to treat a variety of diseases. Almost twenty million are caught each year and used for this purpose alone. Seahorses are also sold by street vendors on sticks as a portable snack. They are eaten as a delicacy in Asian restaurants. Souvenir shops often sell them to tourists.

Where do seahorses live?

Seahorses live in temperate and tropical waters all around the world. They prefer areas where they can find cover from predators.

Coral reefs, seagrass beds, and places where rivers meet the sea that are thick with cover for these defenseless creatures. Seahorses are found in both the Atlantic and Pacific Oceans. They have also been found in the Thames Estuary and in the Mediterranean Sea.

Seahorses sure look different from other fish. What are some of the things that make seahorses unique?

Seahorses look nothing like fish. But they are related to other bony fish, like salmon. If you stretch a seahorse out to it’s full length, it is easy to see that they are really fish. Seahorses are from .6 to 14 inches long. Their name comes from their horse-like appearance.

Seahorses have no scales, just a thin skin stretched over bony rings. You can tell each species apart by counting the number of rings they have. Seahorses swim upright unlike most other fish. They are not good swimmers, they use fins behind their eyes to steer and a fin on their back to move.

The slowest swimming fish in the world is the dwarf seahorse who swims at a rate of five feet an hour. Because they are slow swimmers and easy targets for predators, they often hang on to seagrasses with their tail to stay hidden. Seahorses suck up food with their snouts. Their eyes are like the chameleon in the fact that they move independently of each other.

What do seahorses eat, and how do these mellow creatures catch prey?

Seahorses eat mainly small crustaceans ( sea animals with no backbone). They also eat spineless shrimp, and fish larvae. Seahorses hide themselves well and wait for the best time to strike. By quickly spinning their long snouts they suck their prey into their bodies. Their head shape allows them to get extremely close to their prey. Seahorses make a clicking sound while eating that they also make when communicating with other seahorses.

Between medicine, food, and souvenirs there are a lot of seahorses being harvested. Are they an endangered animal?

There isn’t a lot of reliable data on seahorse harvesting, birth rates and other things used to determine population. One thing is for sure, the seahorse is in danger if people don’t do something about our oceans. Dwindling sea grass, and disappearing coral reefs all affect seahorses, as well as other marine animals. Conservationists are fighting hard to preserve our oceans so we don’t lose creatures like the seahorse.

Pregnant Seahorse – Do male seahorses really carry their babies until they are ready to hatch?

Male seahorses do carry their young through gestation. No one knows exactly why this happens. Some scientists think that it has something to do with population. The female can make more eggs if she isn’t the one responsible for caring for them. Seahorses rarely make it to adulthood. This is why the average amount of eggs per hatching ranges between 100 – 2500. The male seahorse pushes the babies, known as fry, out of his stomach.

Fish don’t care for their babies like some other animals do. The fry drift off, and are often eaten, or float into unfavorable waters. Only . 5% of all fry survive.This is higher than other types of fish because the seahorse eggs are protected during gestation in the male’s stomach.

Can seahorses live in home aquariums?

Seahorses have a very low survival rate in home aquariums. The environment required for seahorse survival is very unique. Even in commercial aquariums, the environment has to be closely monitored to keep conditions optimal for the seahorse’s survival.

There are organisations set up to protect seahorses and to tell people more about them. One of these is The Seahorse Trust.